Abstract: The kappa Cygnids are absent in most years, but the years 2020 and 2021 fit in a 7-year sequence of past returns when the shower was active. Modest activity was detected in 2020. Now, Northern-hemisphere networks of the CAMS video-based meteoroid orbit survey are detecting stronger activity of the kappa Cygnids than in 2020.  In past returns, the shower peaked on August 13, a few days from now, close to the peak of the Perseids. The shower is known to produce occasional fireballs with multiple flares.

The kappa Cygnids are an episodic shower, absent in most years, but clearly present in some. In those years when the shower is active, the radiant emerges from the antihelion source in late June, then moves gradually north towards Cygnus, where activity peaks in mid August.

The peak of the shower coincides with that of the Perseids and, back in 1993, the kappa Cygnids photobombed the outbursting Perseids. The shower creates occasional fireballs that have multiple flares and are very photogenic. Observers in southern France noticed a -6 to -7 magnitude kappa Cygnid several nights in a row (Langbroek, 1993).

All northern hemisphere networks of the video-based meteoroid orbit survey CAMS (Cameras for Allsky Meteor Surveillance) have detected the shower. There are CAMS networks in the USA (coordinated by P. Jenniskens, A. Howell, N. Moskovitz, J. Juneau, T. Beck, P. Gural, and W. Cooney), the BeNeLux (C. Johannink), and the United Arab Emirates (M. Odeh). Meteors filmed from two or more locations are tracked and triangulated to determine their path in the atmosphere. The radiant is the direction from which the meteors are seen to approach. The radiant plots for the combined network, displayed on the celestial sphere, can be consulted on the CAMS website selecting the date in the calendar.

The shower was first detected in late June, the radiant gradually moving to higher declination.  On the night of Aug. 8 (solar longitude 135.6 deg), the shower radiant was elongated in a north-south direction and located just east of Vega at R.A. = 282.9°, Decl. = +44.1° (equinox J2000.0), with shower meteors having geocentric velocities of 21.6 km/s. These are relatively slow meteors. 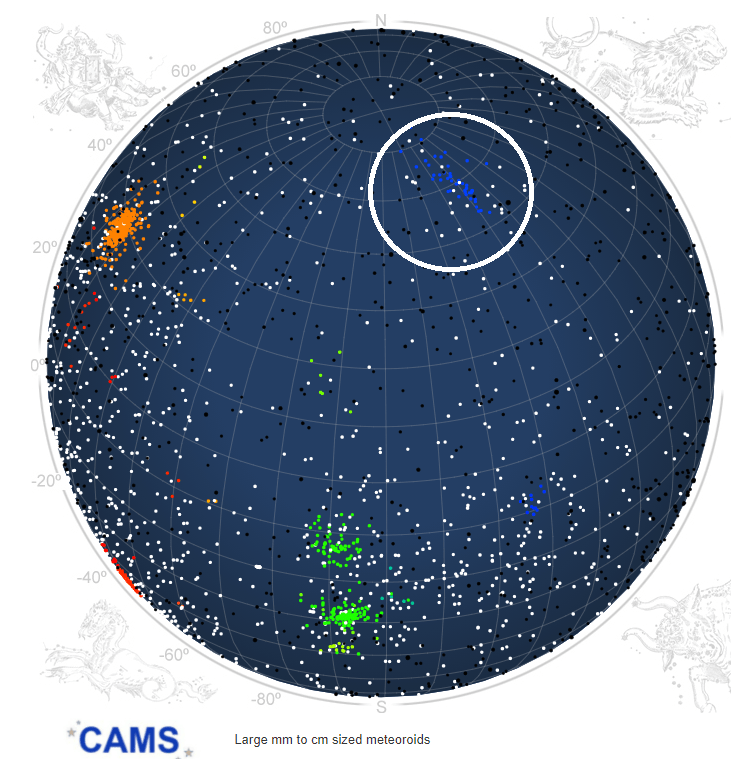 The shower makes a great target for photographic and spectroscopic observations and will delight the casual viewers of this year’s Perseid meteor shower in the days to come.