Abstract: An unexpected outburst of Perseids was detected by low-light video observations on August 14, 2021. The outburst peaked at solar longitude 141.474 ± 0.005 degrees (equinox J2000.0) and the activity profile had a Full-Width-at-Half-Maximum of 0.08 degrees solar longitude and a peak rate of ZHR = 130 ± 20 per hour above the normal ~45 per hour annual Perseid activity. The Perseids had a steeper magnitude size distribution index than the normal annual shower component. The activity profile is similar to that derived from visual and forward meteor scatter observations. This activity may be related to the earlier smaller enhancements observed in 2018 and 2019.

In 2018, visual observers reported a narrow peak of Perseid shower activity around solar longitude 140.95°, about ~30 hours after the traditional Perseid maximum, with a peak of about ZHR = 25 per hour above the normal Perseid activity of ZHR ~ 45 per hour at that time (Miskotte 2019). In 2019, a similar peak was recorded by forward meteor scatter observations collected by the International Project for Radio Meteor Observation. That year, the outburst peaked at solar longitude 141.02° with a peak ZHR ~30 per hour above normal activity (Miskotte 2020a; 2020b). Here, we report the detection of a more significant outburst on August 14, 2021 (Jenniskens, 2021). This outburst was not anticipated from known 109P/Swift-Tuttle dust trail encounters.

The Perseids are best observed from the northern hemisphere. The 2021 outburst happened between 6h and 12h UTC on August 14, 2021 , at a time best suited to the CAMS video-based meteoroid orbit survey networks in the United States. The networks triangulated meteors using low-light video cameras and determined the meteor’s radiant and speed in a continuous night time surveillance. The weather was mostly clear for networks in Texas (coordinated by W. Cooney and including D. Selle, F. Cyrway and J. Brewer) and California (P. Jenniskens, D. Samuels, J. Albers, E. Egland, B. Grigsby and J. Wray). CAMS Mid-Atlantic (coordinated by P. Gural), CAMS Florida (A. Howell), CAMS Arkansas (L. Juneau) and LO-CAMS in Arizona (N. Moskovitz) also observed some of the meteors under partial clear skies (c.f. CAMS-website for date of August 14).

Early results from the new CAMS Texas network  in mostly clear skies and the CAMS California network  in clear skies show an activity profile with peak Zenith Hourly Rate ZHR = 130 ± 20 per hour on top of normal ZHR = 40–45 per hour annual Perseid activity (Figure 1). The Full-Width-at-Half-Maximum of the fitted Lorentzian profile is 0.08 ± 0.01 degrees solar longitude. The peak occurred at solar longitude 141.474 ± 0.005 degrees (equinox J2000.0), corresponding to 8.2h UTC on August 14. The combined magnitude distribution index was 3.59 ± 0.36, compared to 2.94 ± 0.04 for the annual component in other years at this solar longitude. 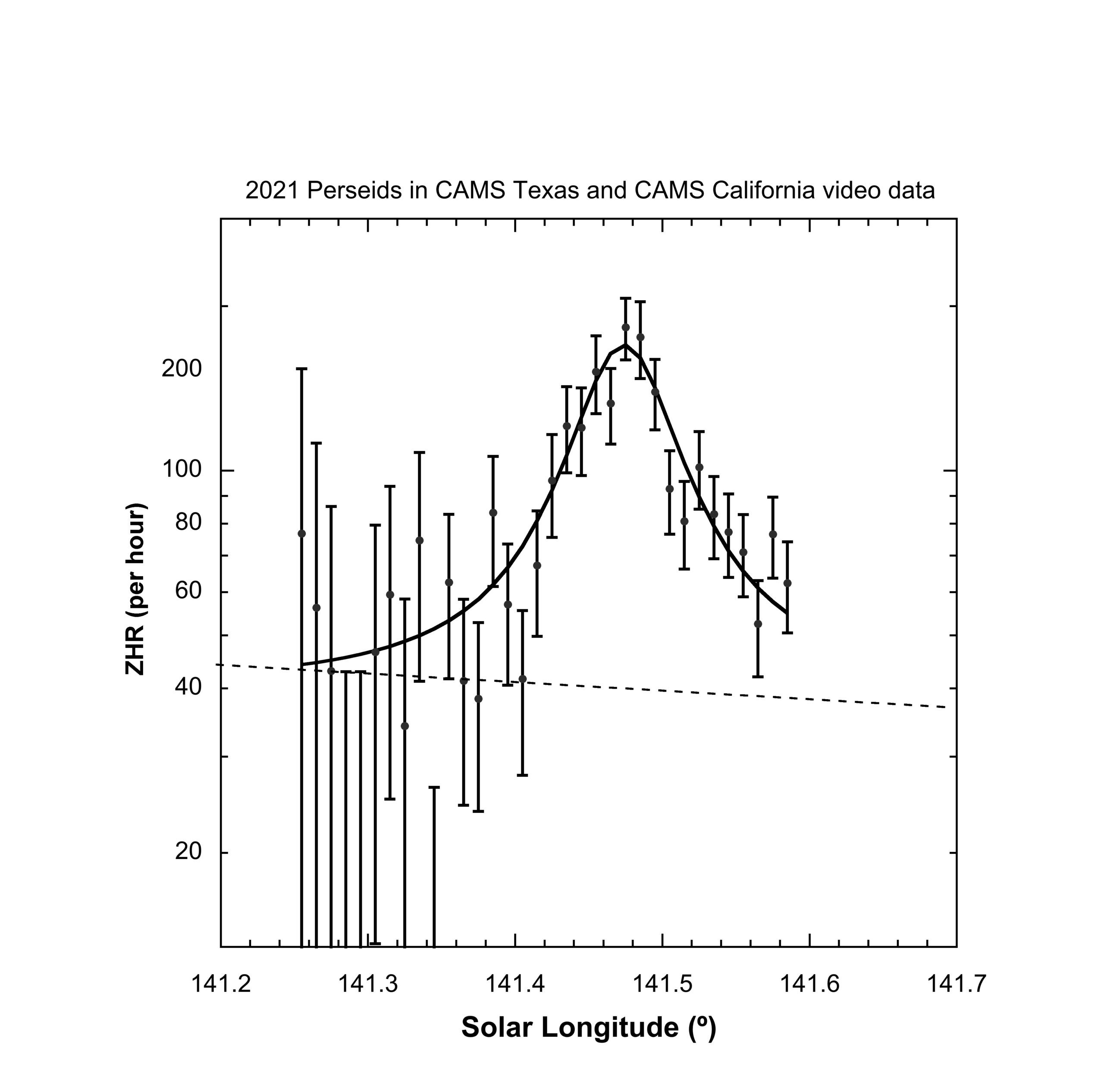 Figure 1 – 2021 Perseid rates according to CAMS Texas and CAMS California video data. The vertical scale is logarithmic. The dashed line is the level of normal annual Perseid activity.

3 Comparison to other observations

Pierre Martin, visually observing from Ottawa, Canada, reports “multiple Perseids per minute with many bursts, sometimes 3-4 in a second”, starting at 6h UTC. He observed until 9h UTC, under clear skies with star limiting magnitude 6.7. From his 5-minute interval counts, we calculated a peak ZHR = 210 ± 20 per hour at solar longitude 141.474 ± 0.005 deg. The visually observed meteors follow the video data profile well (Figure 2). 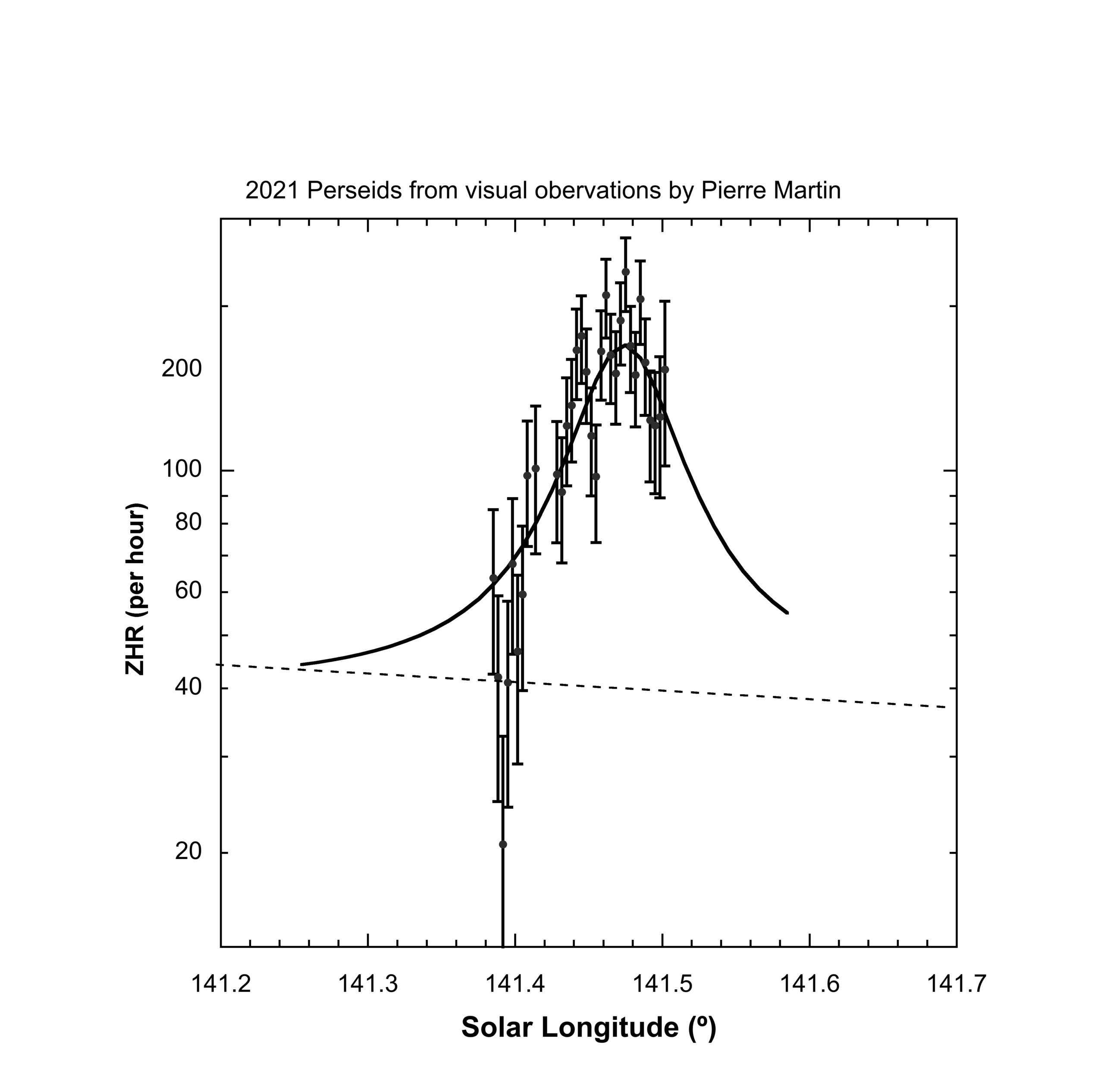 This outburst was also confirmed by radio forward meteor scatter observations posted by H. Ogawa of the International Project for Radio Meteor Observation. A compilation of rates from 49 observers in 14 countries saw the detection count increase above normal levels after 6.4h UTC (141.40 deg solar longitude), and peak at about 8.8h UTC (141.49 deg) at a level of 3 times the Perseid peak level, before declining to normal levels at 12.5h UTC (141.65 deg solar longitude). Combined Zenith hourly rates peaked around ZHR = 210 per hour, in good agreement.

The outburst can not be identified yet with a known dust trail crossing from 109P/Swift-Tuttle. On the other hand, the width of the outburst is similar to that of past Perseid Filament returns (Jenniskens, 2006). The Filament is thought to be an accumulation of dust in mean-motion resonances from many past returns. That could perhaps mean that this dust was directed into Earth’s path this year. These observations may help better understand the origin and evolution of that dust component. 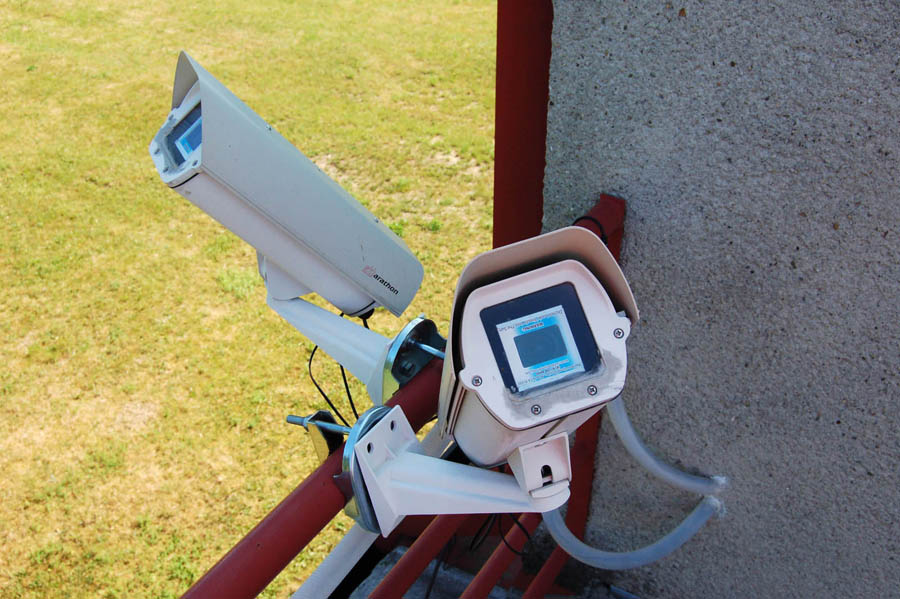