Abstract: A summary of the activity of the CAMS BeNeLux network during the month of June 2021 is presented. 4347 multiple station meteors were captured which allowed to calculate 1389 orbits. June 2021 was the worst month of June since 2016.

The last weeks of May and first weeks of June display very low meteor activity combined with short nights with between 7 hours and less than 6 hours of capture time. Therefore, no spectacular numbers of orbits are to be expected. Collecting orbits under these circumstances remains a challenge. What did June 2021 bring us?

June is the most difficult month for CAMS BeNeLux because of the short observing window of barely 5 hours dark sky each night. The first half of June 2021 had a number of clear nights and several with partial clear sky. However, the second half of June came with exceptional poor weather, much too cold and totally overcast with a lot of rain. The worst possible weather pattern made astronomical observing almost impossible. As many as eight nights remained without any paired meteor (3 in June 2020). Three nights resulted in more than 100 orbits in spite of the short duration of these nights (against 8 in June 2020 and 13 nights in June 2019 when two nights scored more than 200 orbits). The best night for June 2021 was June 12–13 with 146 orbits. The statistics for June 2021 are compared in Figure 1 and Table 1 with the same month in previous years since the start of CAMS BeNeLux in 2012.

While all CAMS stations in Belgium operate 7/7 with AutoCams, some of the Dutch CAMS stations still operate occasionally when the weather is clear. This way the coverage of the northern part of the network area isn’t as good as the southern part. For the coverage of the atmosphere by a camera network the chances for multiple station events especially during nights with variable weather depend on how many cameras are operational. When the weather happens to be poor but unpredictable like in June 2021, the only way not to miss unexpected clear sky is to have the camera systems running all nights, regardless the weather. To make the situation for June 2021 even worse some of the Dutch station were temporarily shut down for various reasons. 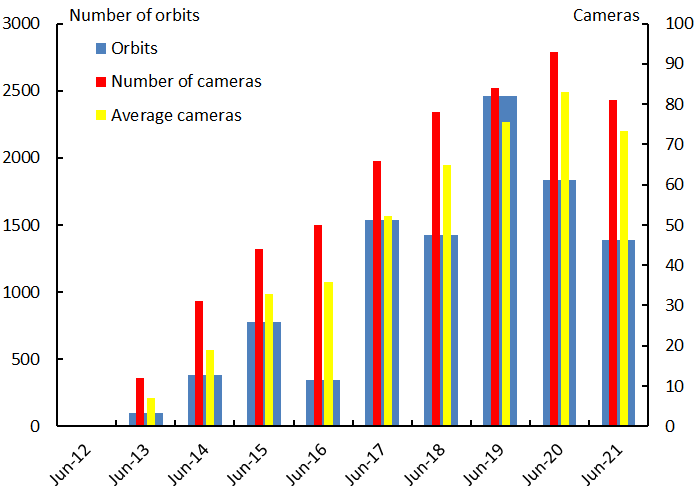 During the best nights 81 cameras were operational (93 in June 2020 and 84 in 2019). Thanks to AutoCAMS at least 54 cameras were all nights operational (60 in 2020 and 63 in 2019). On average 73.3 of all available cameras were active, much less than the 83.1 of last year. The ratio of multiple station coincidences depends on the number of stations with clear sky during the same time span. The more stable the weather conditions are network wide and the less technical problems, the better the chances to catch a meteor from at least two stations.

The total number of orbits collected for the month of June reached 10246 in 208 nights of June that allowed to collect orbits. This way the month of June remains the poorest covered month of the year for CAMS BeNeLux, mainly because of the short duration nights.

Two RMS cameras produced the best scores in terms of orbits of all cameras in the CAMS BeNeLux network. There is no competition to nominate any most successful camera in the network, but in this case, it is interesting to see how the RMS performs compared to the Watecs. Certain cameras are pointed at regions where the chances for multiple station events is simply significant less, for instance towards the borders of the camera network coverage. However, to illustrate the order of difference for these RMS cameras, it is useful to compare these numbers with what the most successful Watecs obtained.

For the future of the CAMS BeNeLux network, the installation of extra RMS cameras will make the difference.

Table 2 – The ten cameras of the CAMS BeNeLux network with the best score in terms of orbits during the poor weather month of June 2021.

June 2021 was a poor month due to the very bad weather and to make things worse several CAMS stations remained temporarily unavailable. No surprise that June 2021 ended as the worst month of June since 2016.

Many thanks to all participants in the CAMS BeNeLux network for their dedicated efforts. The data on which this report is based has been taken from the CAMS website. The CAMS BeNeLux team was operated by the following volunteers during June 2021: 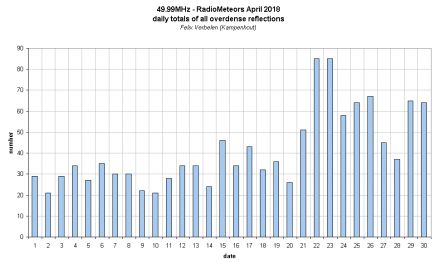 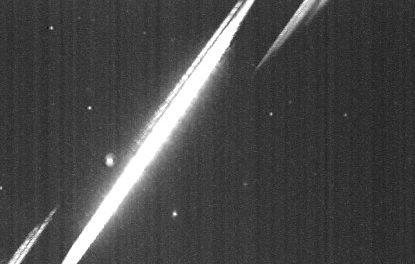