Abstract: A summary of the activity of the CAMS BeNeLux network during the month of July 2021 is presented. July 2021 allowed to obtain meteor orbits during 28 nights resulting in 7125 multiple station meteors, with a total number for July 2021 of 2525 orbits. A maximum of 81 cameras was operational at 27 camera stations during this month.

Although a summer month, the weather in July is often unfavorable for astronomy in the BeNeLux area. The short nights with only about 6 hours of observing time are easily ruined by bad weather. The overall meteor activity increases significantly during this month with some well-established showers late July while Perseid activity becomes clearly visible. So far, July 2018, 2019 and 2020 were all excellent months of July for our CAMS network, would July 2021 become another successful month of July?

The BeNeLux CAMS network had its last major expansion in the summer of 2017 and since then every now and then some new cameras were added. No new cameras were added in July 2021, but as many 25 cameras at several CAMS stations in the Netherlands and Germany were not available for various reasons in July 2021. It remains a challenge to keep all the hardware operational and people motivated. In a video camera network, the success of each participant depends on the availability and goodwill of all others involved in order to obtain multi-station events. When a number of camera locations have no cameras running, this reduces the number of paired meteors. Since AutoCAMS got applied at most camera stations, the practice of running cameras only occasionally on nights with clear sky got limited to four of the CAMS stations. 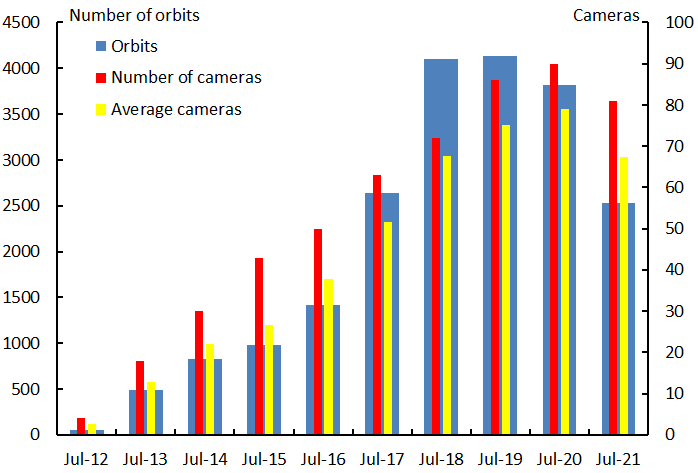 A combination of unfavorable weather circumstances with less operational cameras explains why this month was the least successful month of July since 2016. Considering the poor weather and the availability of less cameras, the total of 2525 orbits is still a very good result in these circumstances.

Many thanks to all participants in the CAMS BeNeLux network for their dedicated efforts. The data on which this report is based has been taken from the CAMS website. The CAMS BeNeLux team was operated by the following volunteers during July 2021: