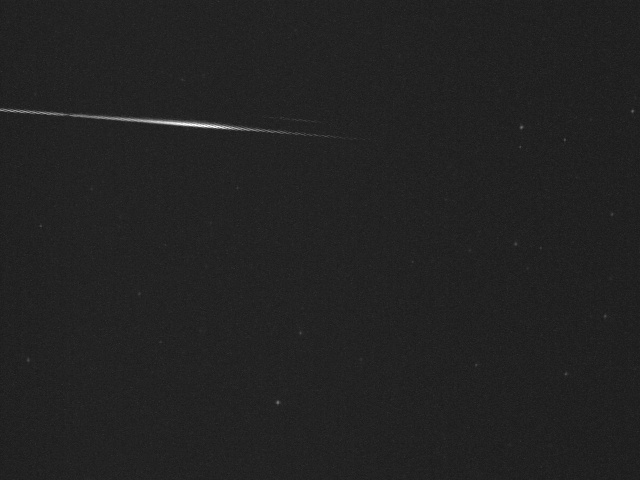 Abstract: The predicted new meteor shower from crossing the 1988 and 1995 dust trails of Jupiter-family type comet 15P/Finlay on September 27–30, 2021, materialized and was recorded by CAMS video-based meteoroid orbit survey networks in New Zealand and Chile. The new shower is called the “Arids”, with meteors radiating from the constellation Ara, the Altar. The median radiant position of the first 13 shower members observed was at R.A. = 262.7 deg., Decl. = -57.5 deg. (Equinox J2000.0) with geocentric entry speed Vg = 10.8 km/s, but the shower was ongoing when this report was made. A potentially more intense shower is expected during the crossing of the 2014 dust trail on October 7, 2021.

The upcoming October 6 and 7 encounters with the 2014 dust trail are especially interesting. Ye et al. (2015) pointed out that comet 15P/Finlay had two cometary outbursts of activity during that return, which could translate into a more dense dust trail. As a result, their predictions for this year’s meteor shower have ZHR peak at 600–1100 per hour. The most recent update of expected rates is given in Ye et al. (2021).

These predictions have gotten more urgency now that in the past few nights CAMS video-based meteoroid orbit survey networks in New Zealand and Chile have detected the first two of these predicted encounters. These were meteor outburst caused by Earth encountering debris ejected from comet 15P/Finlay during its perihelion passage in 1988 and 1995. The shower was clearly detected from September 27 to 30. These are the first meteors observed from comet 15P/Finlay. The shower was added to the IAU Working List of Meteor Showers under number 1130 and name “Arids” (ARD), because the meteors radiated from the southern constellation Ara, the Altar (c.f., http://cams.seti.org/FDL/ for dates of 2021 Sep. 29 and 30).

In a recent CBET telegram (Jenniskens et al., 2021), we reported that CAMS New Zealand, with stations operated by I. Crumpton, C. Duncan, and N. Frost and the network coordinated by J. Baggaley of the University of Canterbury at Christchurch, triangulated 9 Arids between 2021 Sept. 28 08:40 and 17:18 UT, while CAMS Chile, with stations operated by J. Rojas, E. Jehin and T. Abbott and the network coordinated by S. Heathcote of AURA/Cerro Tololo, triangulated 4 Arids between 2021 Sept. 28 23:49 and Sept. 29 03:45 UT. Observations continued until 09:33 UT, but at that time the radiant had long set. Other southern hemisphere CAMS networks had poor weather. At the time of writing, the outburst was ongoing. 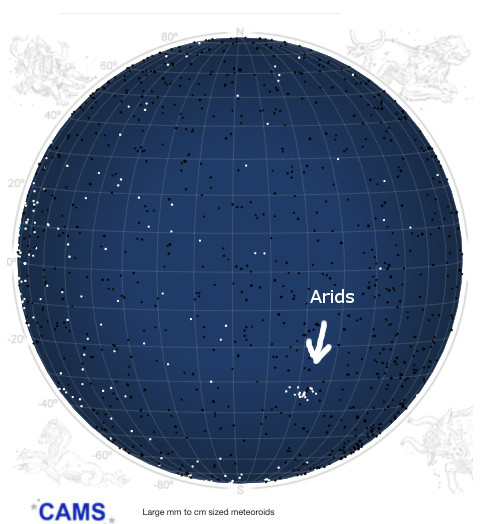