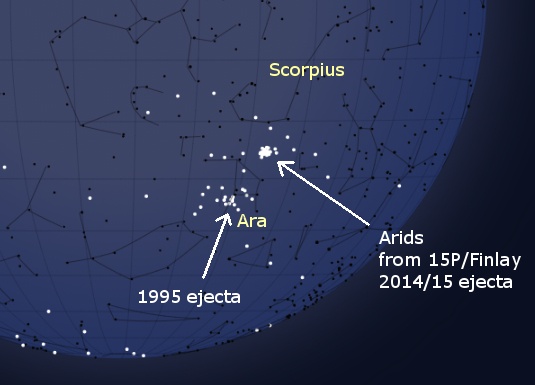 Abstract: The predicted Arid meteor shower outburst on October 6/7, 2021, caused by Earth encountering the debris ejected by comet 15P/Finlay during its activity outbursts in 2014 and 2015, did materialize. The 2014 outburst dust was documented by CAMS low-light video networks in Chile. The observed activity was higher than that during the 1995-dust trail crossing, suggesting that the cometary activity did have an influence on the density of the 2014 dust trail.

CAMS detection of the 2014 dust trail

The CAMS video-based meteoroid orbit survey networks in Chile, Texas, Namibia and Australia detected this predicted Arid meteor shower outburst caused by Earth encountering the debris ejected by comet 15P/Finlay during its activity outbursts in 2014 and 2015. The night started out partially cloudy in Chile, with the first meteor detected at 23:21 UTC on Oct. 6. In partial clear skies, and based on the initial automatic reduction of data, a total of 19 Arids were triangulated by CAMS Chile (with networks operated by J. Rojas, J. Vilaza, and T. Abbott), 6 by CAMS Namibia (network operated by T. Hanke, E. Fahl and R. van Wyk) , 6 by CAMS Texas (W. Cooney, D. Selle, F. Cyrway, and J. Brewer), and 2 by CAMS Australia (M. Towner, C. Redford and L. Toms) during 2021 Oct. 6 11:04 and Oct. 7 04:10 UTC (c.f., http://cams.seti.org/FDL/ for dates of 2021 Oct. 7), corresponding to the solar longitude range 193.12 to 193.83 deg. (Equinox J2000.0).

First impression of other reported observations

The outburst was also detected by radio forward meteor scatter observations, summarized by H. Sugimoto and H. Ogawa of The International Project for Radio Meteor Observations. Results show enhanced rates from solar longitude 193.50 to 193.75 deg., peaking at 193.7 deg., corresponding to Oct. 7d 01h UTC (c.f. https://iprmo.org/flash/arids-2021.html). Their preliminary Zenith Hourly Rate is about 80/h. This is in line with predictions by Sato (in Ye et al., 2021).

Visual observer P. Vera of the University of La Serena, in an observing campaign led by J. Vaubaillon of I.M.C.C.E., reported seeing 35 meteors from the constellation Ara between 00:28 and 01:30 UT from El Sauce observatory near La Serena in cloudy skies ((c.f. https://www.imcce.fr/recherche/campagnes-observations/meteors/2021arids). This may well be in agreement with the radio MS reported ZHR.

The University of Colorado SkiYMET meteor radar at McMurdo Sound in Antarctica detected a significant increase in the radar reflection count peaking around 23h UT October 6 (c.f., https://ccar.colorado.edu/meteors/meteors). The slightly earlier peak time is perhaps because of the 2015 cometary outburst having been more rich in small particles.

In conclusion, it appears that the cometary outbursts did significantly enhance the dust density in the dust trail of comet 15P/Finlay. A more detailed analysis will be required to translate the observed dust densities and particle size distributions into better understanding the mass loss observed in 15P/Finlay cometary imaging in 2014 and 2015. 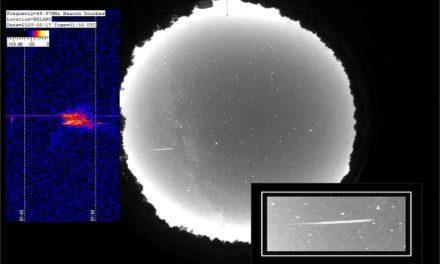 Peculiar meteor above Belgium 2020 May 17