Abstract: A summary of the activity of the CAMS BeNeLux network during the month of September 2021 is presented. September 2021 counted many clear nights. 24894 multiple station meteors were recorded. A record number of 7457 orbits were collected during this month with a maximum of 93 cameras available at 27 locations.

Previous years the month of September brought favorable weather circumstances combined with a rich meteor activity, although no major showers are active this time of the year. Nights are getting longer, about two hours more nighttime between begin of September and the end of the month. What did September 2021 bring us?

The weather was very favorable in September 2021, with almost twice as many multi-station meteors than in 2020. The larger number of cameras that were operational also provided better coverage compared to previous years with favorable weather. The northern part of the CAMS BeNeLux network still suffered less good coverage as some of the CAMS stations were temporarily inactive or unable to contribute for various reasons.

The volume of atmosphere monitored by the CAMS BeNeLux cameras is huge. If all or most cameras are kept operational, most of the meteors registered will help to obtain an orbit. It is important to keep as many cameras operational as possible. This remains a challenge as technical failures cannot be ruled out. Some extra camera stations would be very welcome to reinforce the northern and entire western part of the network. The new RMS cameras are most suitable for this task as these systems are fully automatic. 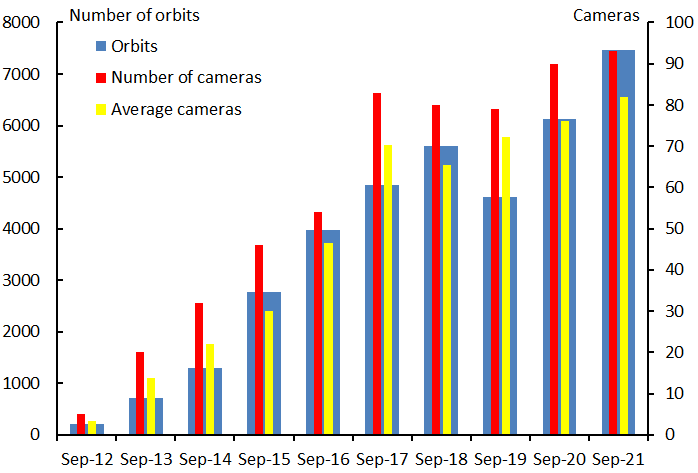 Two RMS cameras were added at Zillebeke near Ypres, CAMS 3853 (BE0003 which was previously installed at Cosmodrome in Genk) and CAMS 3851 (BE0009 home built by Steve Rau). These new cameras will improve the coverage above Belgium and Zeeland. With a total of 93 cameras, never before more cameras were available during September.

The effectiveness of the RMS cameras is obvious when we compare the number of orbits obtained by individual cameras. An RMS camera with a 6 mm lens has the same resolution of 2.5 arcminutes per pixel for its FoV of 54° × 30° compared to a Watec in PAL format with FoV of 30° × 22°. The RMS will capture more meteors because of its larger FoV. Moreover, the astrometric calibration of the RMS software is superior to that of the CAMS software for its Watecs.

Table 2 – Comparing RMS cameras among the twenty cameras of the CAMS BeNeLux network with the best score in terms of orbits during September 2021.

September 2021 confirmed the reputation of this month with a very rich background meteor activity and favorable weather. It will be hard to improve the record number of orbits in the future.

Many thanks to all participants in the CAMS BeNeLux network for their dedicated efforts. The data on which this report is based has been taken from the CAMS website. The CAMS BeNeLux team was operated by the following volunteers during September 2021: