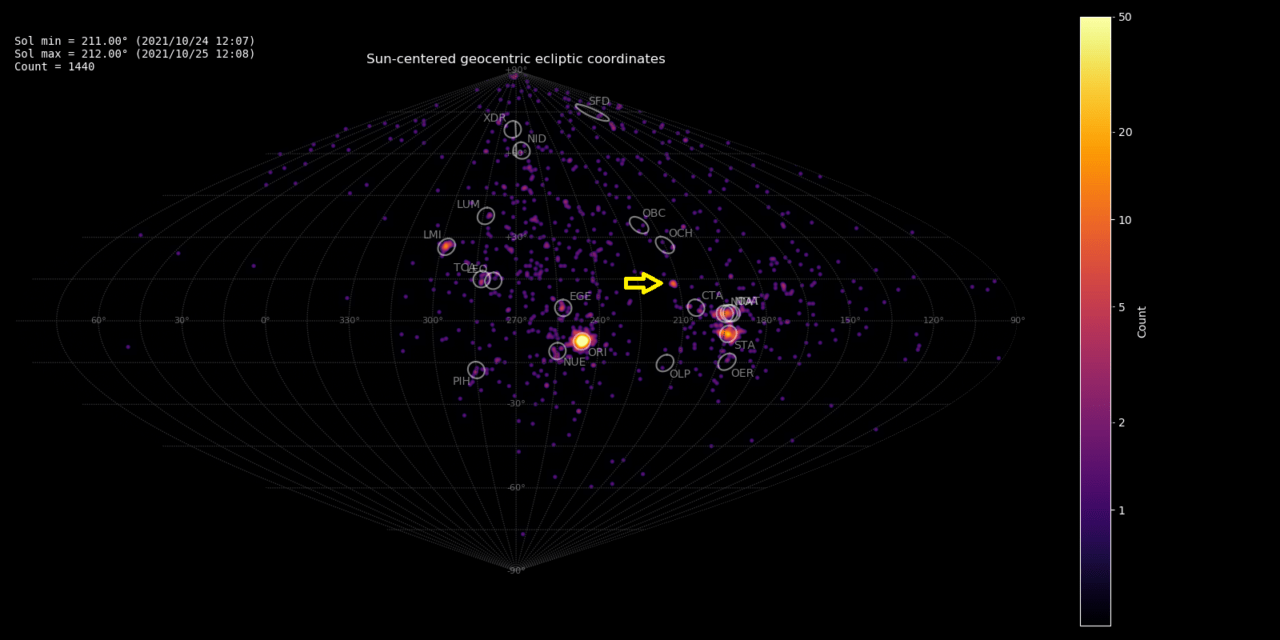 During the night of 2021 October 24–25, more than 500 low-light video cameras of the Global Meteor Network monitored meteor activity worldwide when some unexpected short-lived outburst occurred with a radiant in the constellation of Perseus. The radiant appeared on the radiant plot (Figure 1) once the reduction pipeline with the available uploaded camera data was completed. A preliminary investigation was made to verify the origin and nature of these orbits.  Obviously, a previously unknown and peculiar meteoroid stream had encountered the Earth.

The shower was independently observed by cameras in 7 different countries (Czechia, Germany, Spain, France, Croatia, the Netherlands, and the UK). The first meteor was observed on Oct 24 at 19h10m UTC, and the last one at 22h13m UTC. The main bulk of activity was between 20h30m and 21h00m UTC. The skies were clear before and after, so more would be observed if there were any. 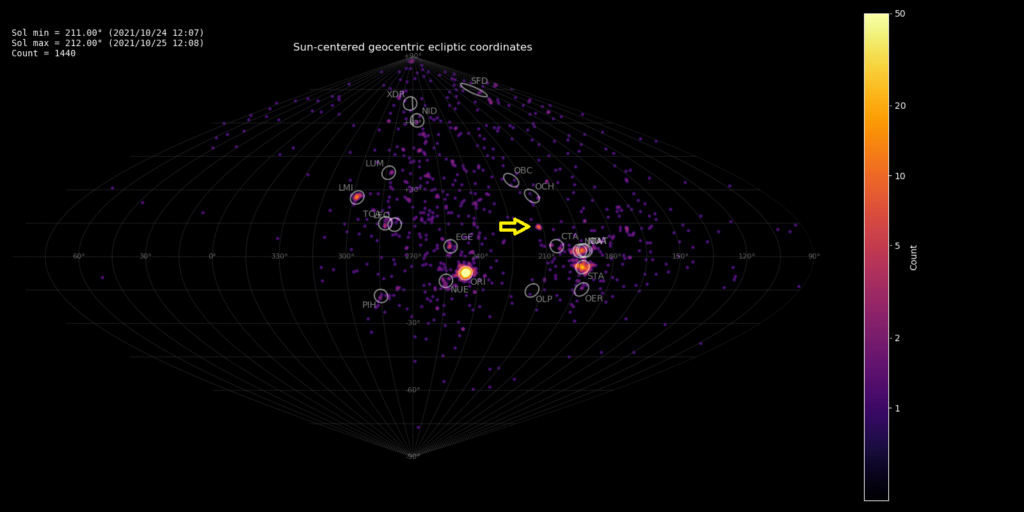 Figure 1 – The unexpected radiant appears as a compact dot at the Sun centered geocentric ecliptic coordinates λ – λʘ = 212°, β = 13.5° on this plot (just above and left of CTA) marked with the yellow arrow. 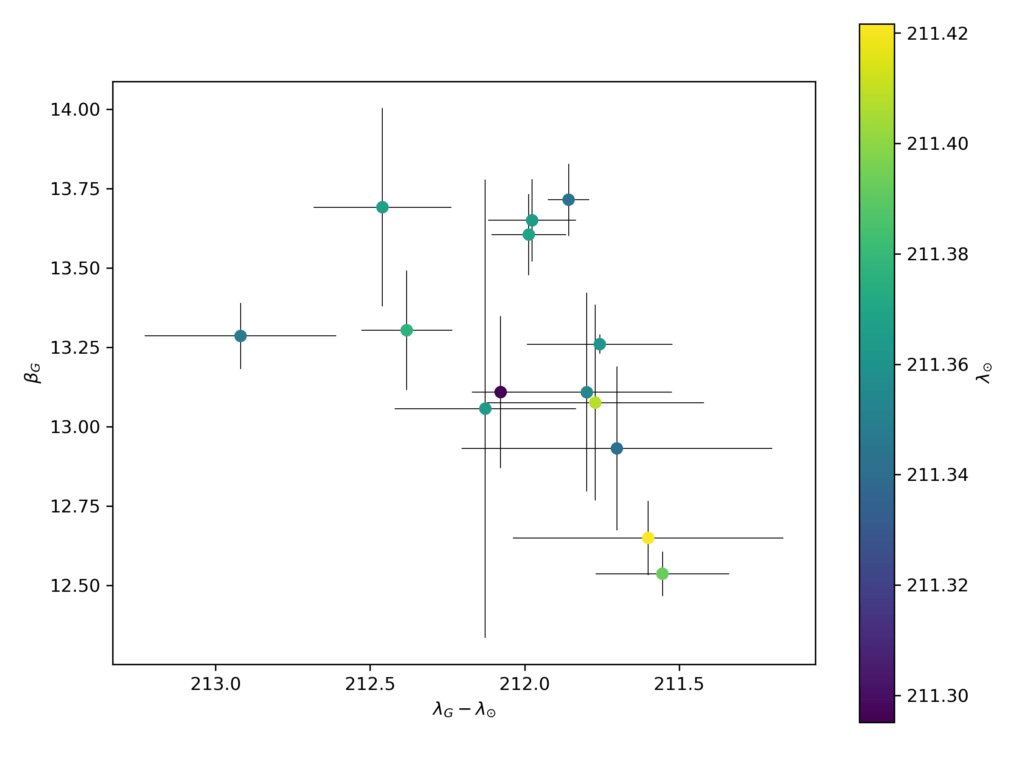 Figure 2 – The radiant distribution in Sun-centred ecliptic coordinates, together with the error bars.

The orbital elements (equinox J2000.0) are those of a sunskirting long-period comet: 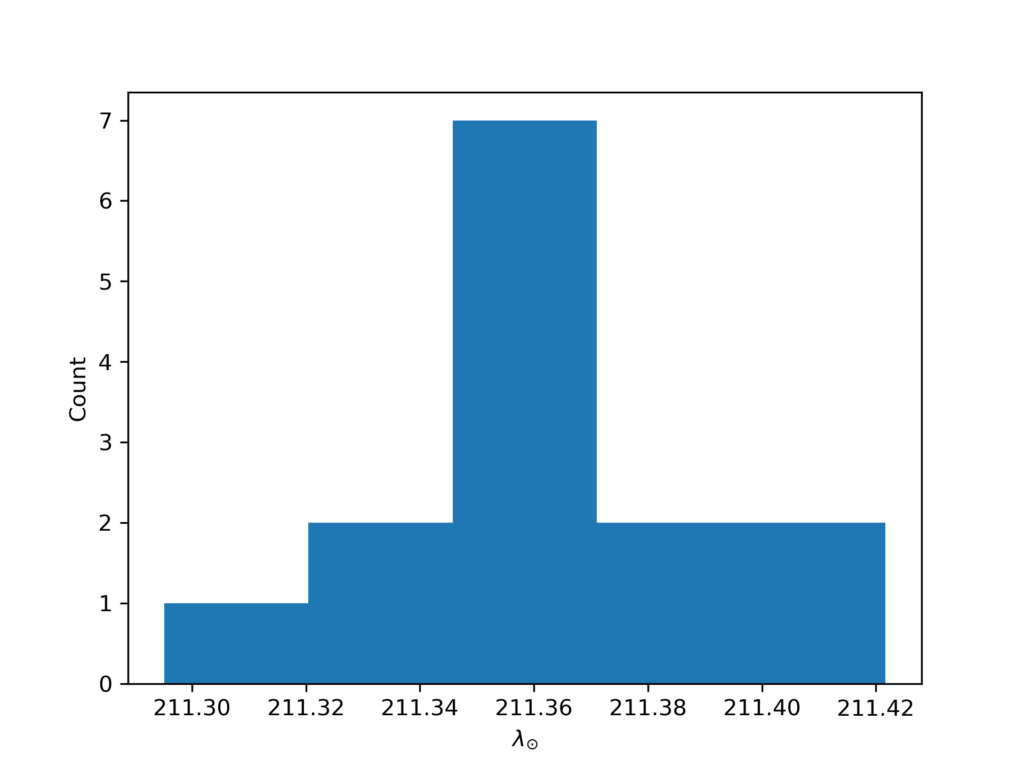 Table 1 – The top 5 matched sorted by the similarity criteria  DSH (Southworth and Hawkins, 1963). 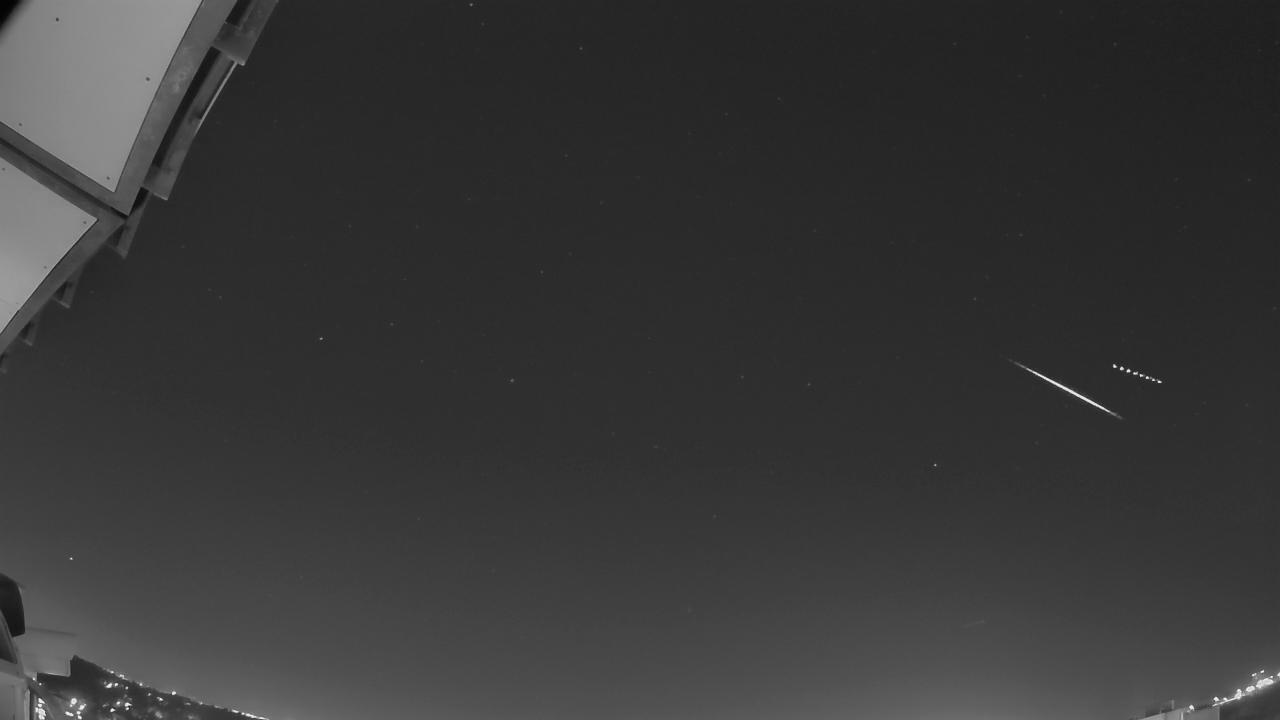 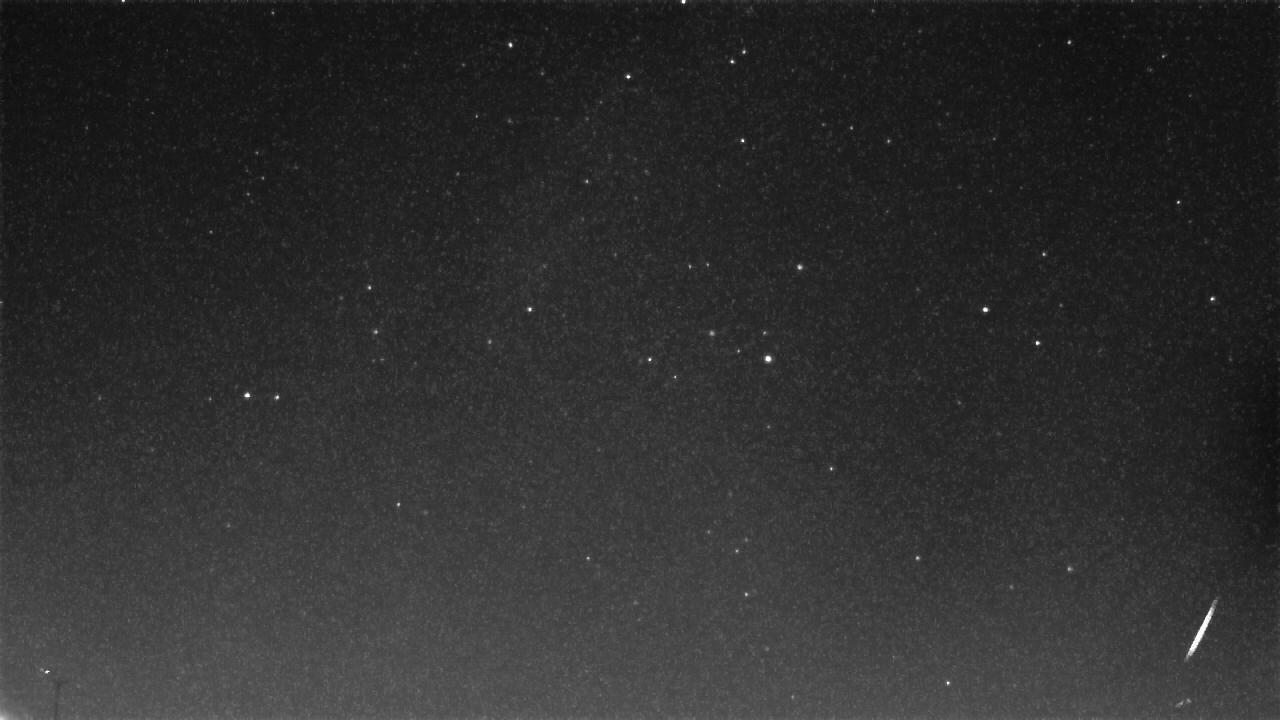 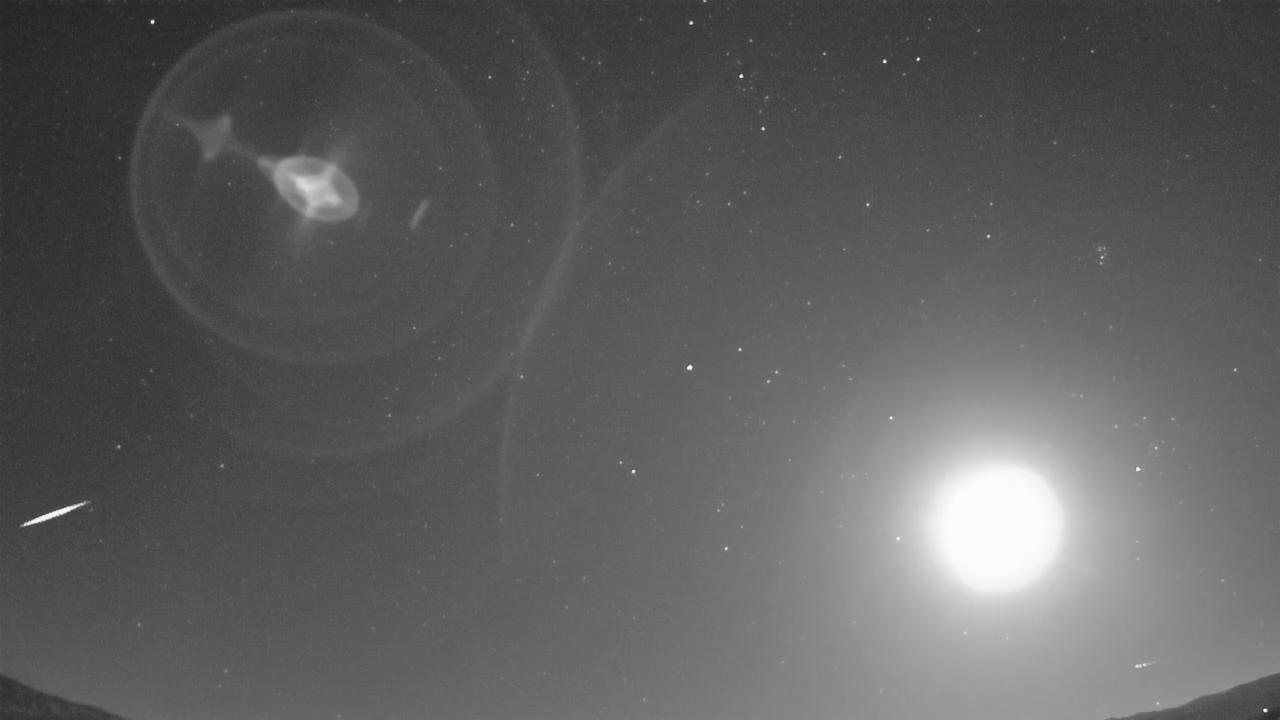 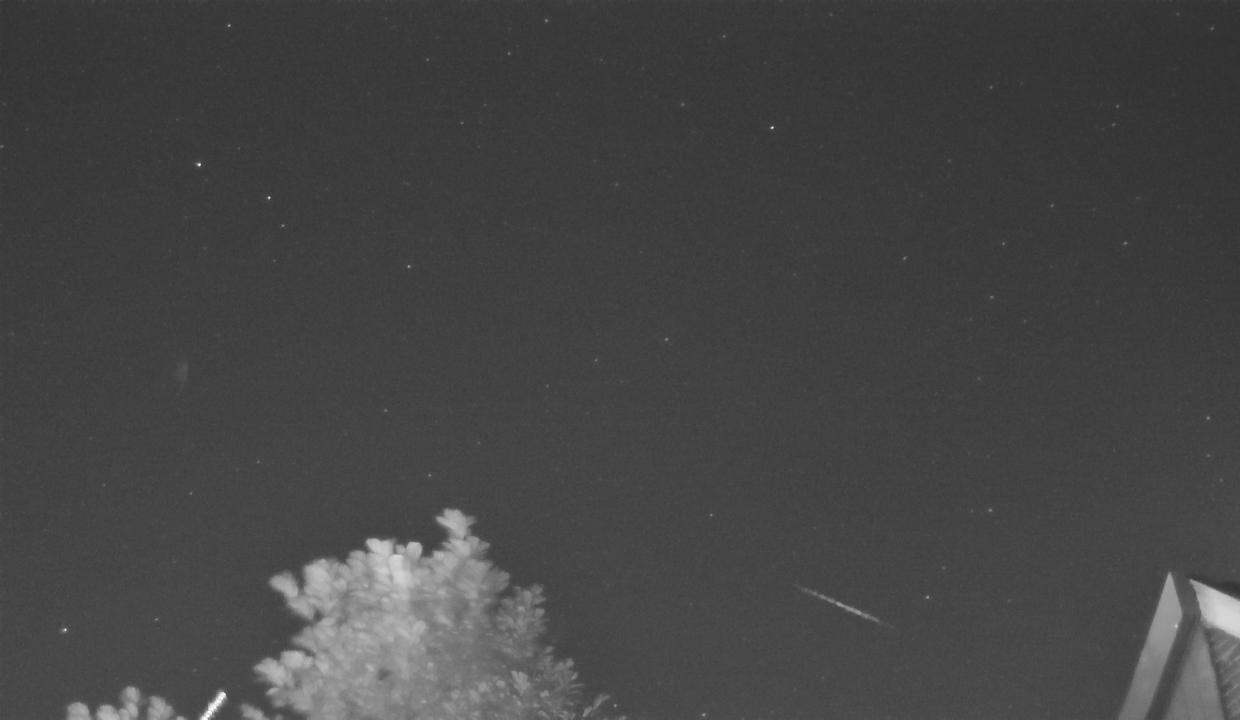 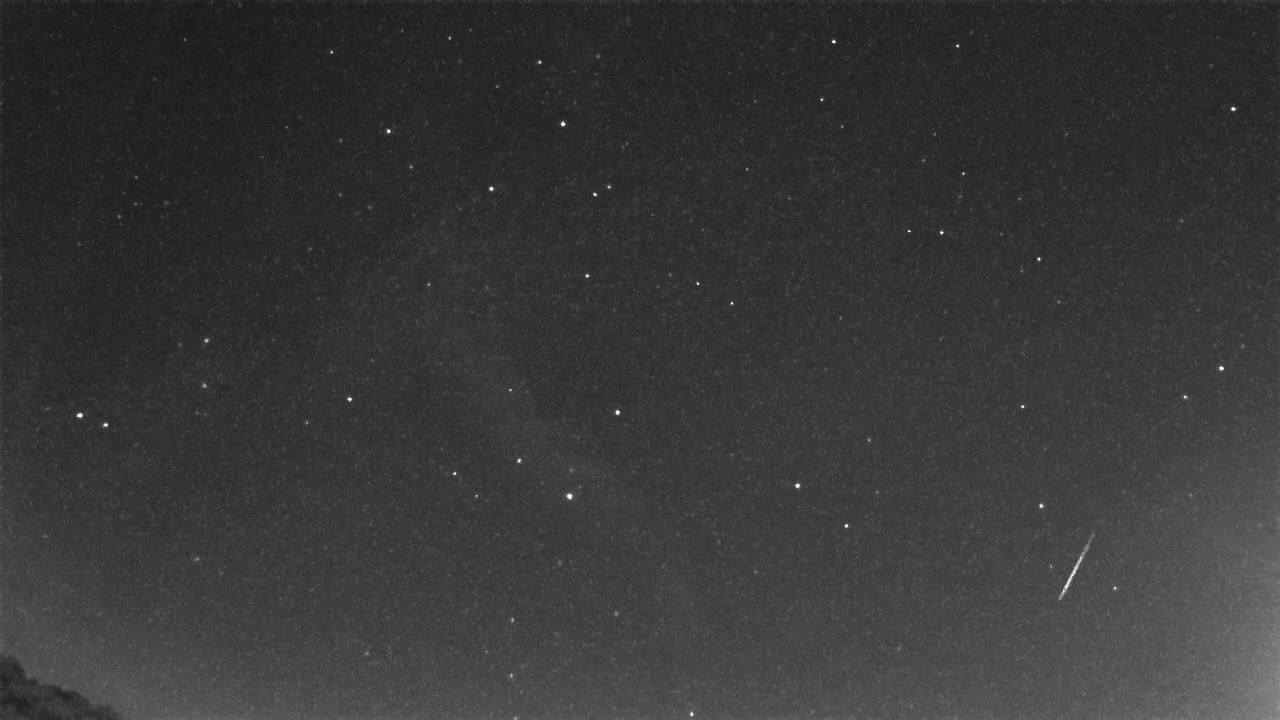 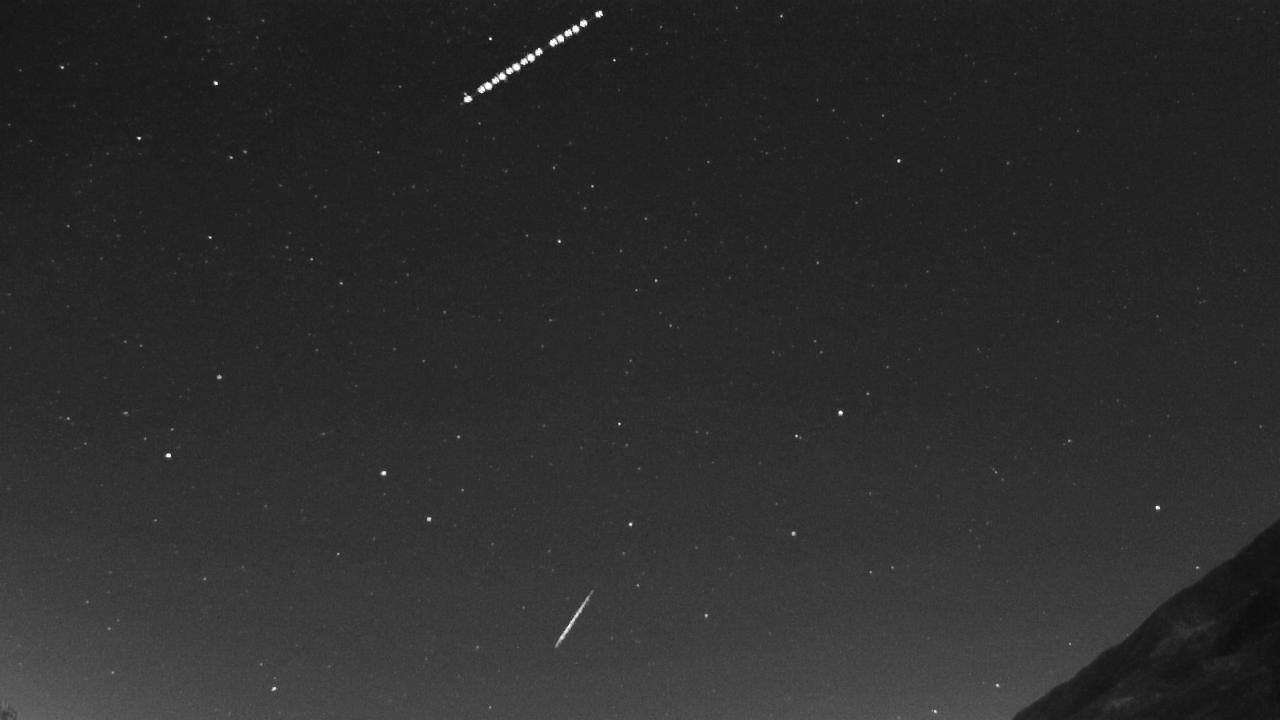 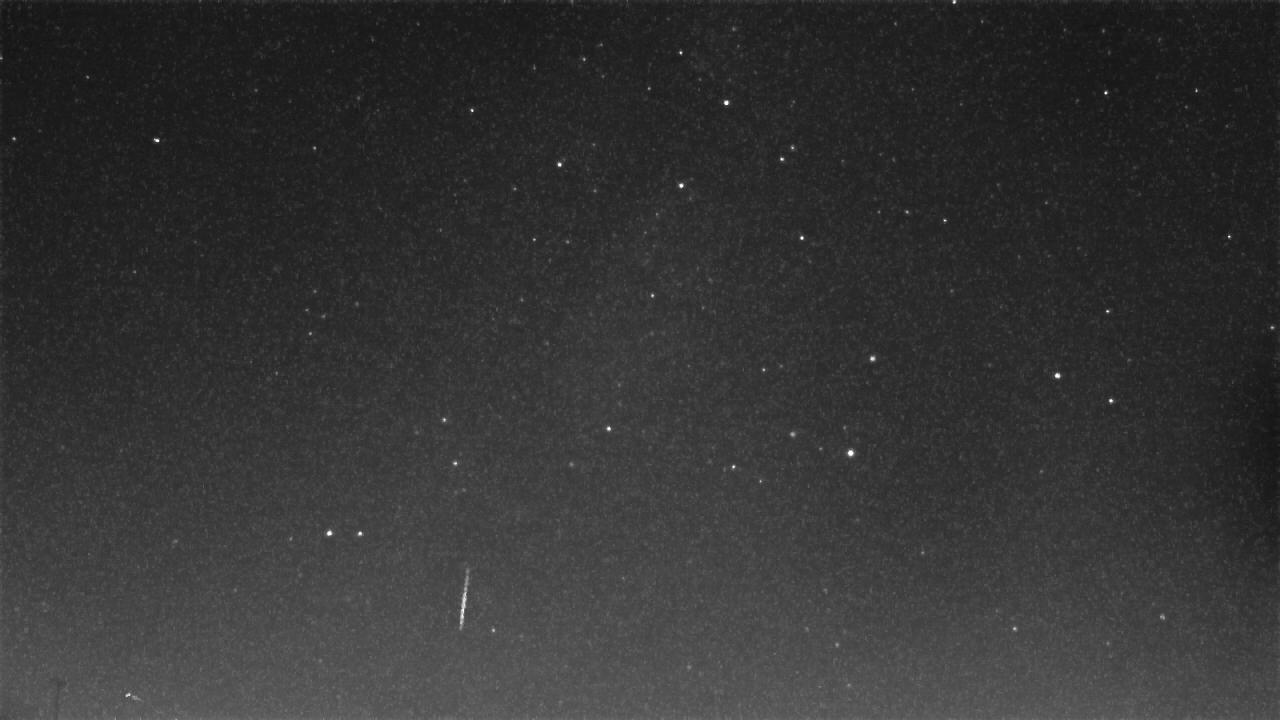 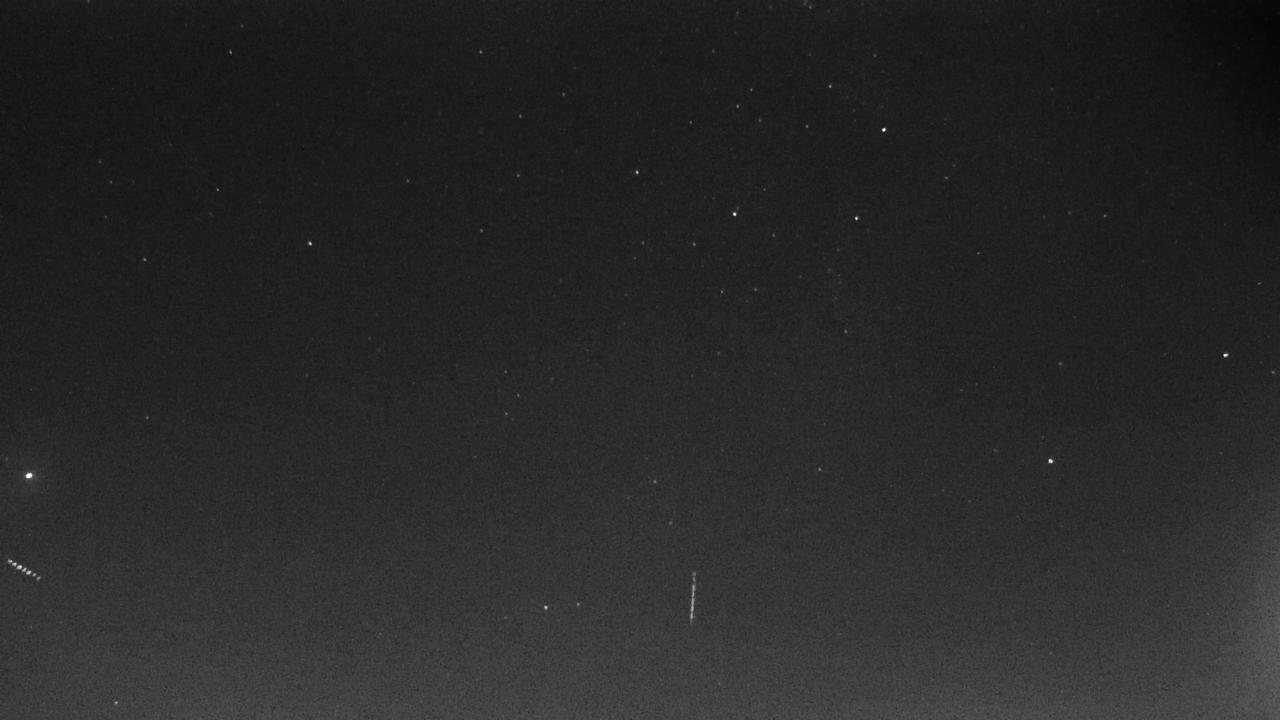 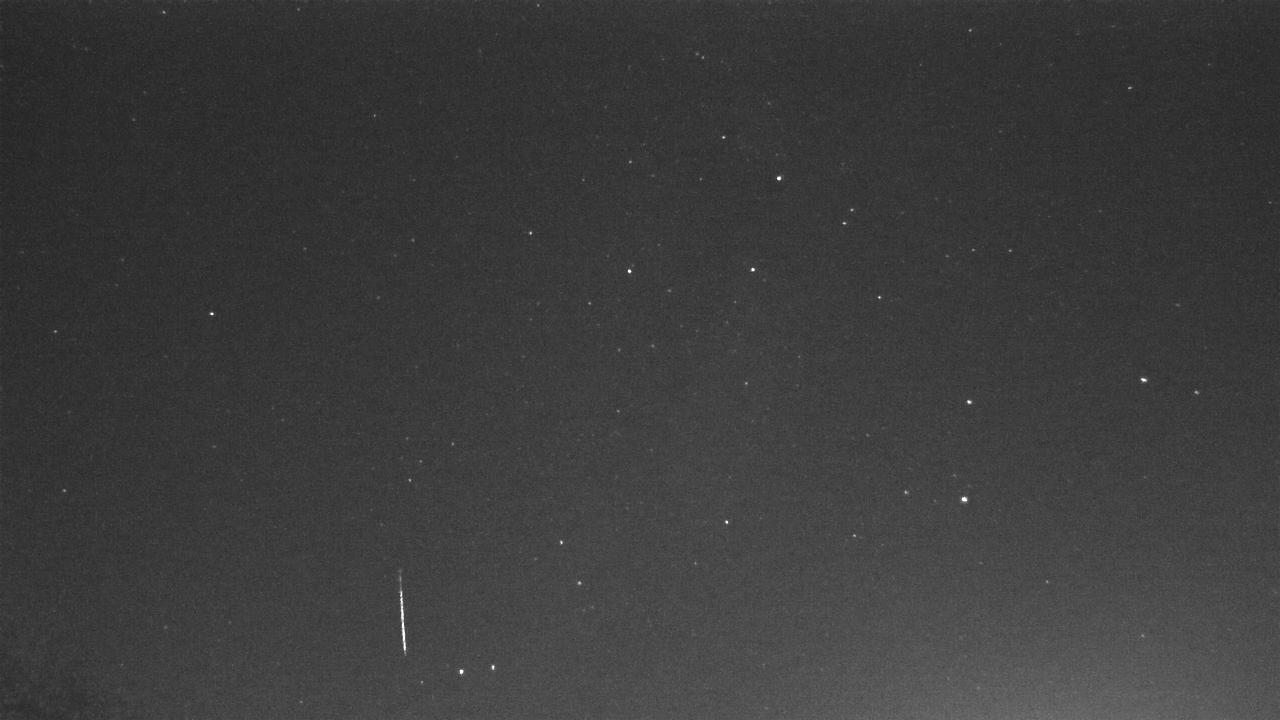 CAMS BeNeLux coordinator Martin Breukers checked the available camera data for this network. A preliminary reduction of the night October 24–25 resulted in about 650 orbits. Only two matching orbits were found with a mean orbit at:

Both meteors appeared on October 24, at 20h21m10s UT (λʘ = 211.344°) (Figure 13) and at 20h40m18s UT (λʘ = 211.357°) (Figure 14) registered by the same cameras stationed in Mechelen (Belgium) and Wilderen (Belgium). It is likely that more candidates may be found once all stations have reported their data. So far, no other CAMS networks detected any meteors from the new meteor shower because either daylight or bad weather interfered. 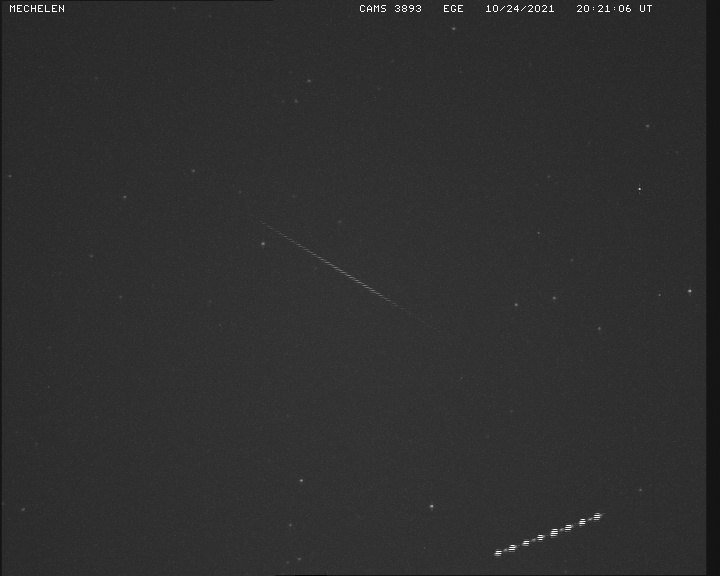 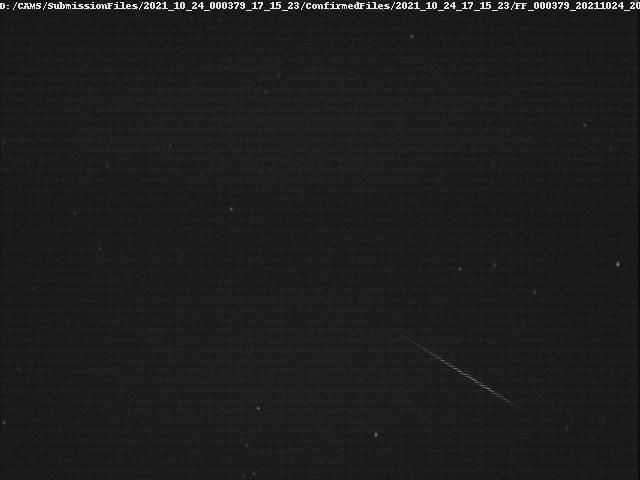 A search among 1326006 orbits collected by CAMS, EDMOND, SonotaCo and Global Meteor Network before 2021, resulted in 20 similar orbits, using the mean orbit for the 14 GMN orbits mentioned above as reference orbit. No significant activity has been detected in previous years. The 20 similar orbits are listed in Table 2, although the connection still needs to be confirmed.

Table 2 – List with 20 possible past detections of October zeta Perseid meteors, DD is the similarity criteria according to Drummond (1981).

The authors thank all participants in the Global Meteor Network community for their commitment and efforts to operate their cameras. Without their efforts this remarkable meteor shower would have passed probably completely unnoticed.

News from the Meteor Library: Draconids 2018

The outburst of the Draconid meteor shower in 2018: an analysis