Abstract: A summary of the activity of the CAMS BeNeLux network during the month of October 2021 is presented. October 2021 had several clear nights and long-lasting clear spells at many other nights. A total of 51696 meteors has been recorded of which 62% was multi-station, resulting in 9669 good quality orbits.

The long October nights with high meteor activity are probably the most promising month for the CAMS BeNeLux network. Unfortunately, most years it remains with “promising”. Overcast and misty weather is most common during this autumn month in the BeNeLux. Would 2021 bring some good luck with October?

Last year we got the worst-case weather scenario for the month October with not a single complete clear night for the entire network. Also 2019 had brought a poor month of October. October 2021 was a wet rainy month with a lot of cloud cover during the day, but with several clear nights and wide clear spells at night. For once we got lucky with this autumn month. 9669 orbits were collected (against 3305 in 2020) which is a new record for this month, doing slightly better than October 2018 when 9611 orbits were collected, including 1391 orbits in a single night with the Draconid outburst.

In total 51696 meteor detections were reported for all 94 operational cameras, 32268 of these could be used for a trajectory and orbit calculation, which is a multiple station score of 62%. A much better score than previous year when only 20135 meteors were detected of which 45% resulted in a trajectory solution. This month counted 23 nights with more than 100 orbits (12 in 2020). The best October night was 23–24 with as many as 926 orbits in a single night. Only two nights remained without any orbits, just like in 2020. The statistics of October 2021 are compared in Figure 1 and Table 1 with the same month in previous years since the start of CAMS BeNeLux in 2012. In 10 years, 257 October nights allowed to obtain orbits with a grand total of 38459 orbits collected during the month of October during all these years together.

Again, no really perfect weather occurred for the Orionids apart from some partial clear sky 20–21–22 October, but CAMS BeNeLux could confirm the discovery by the Global Meteor Network of a new shortly active meteor shower (Vida et al., 2021). 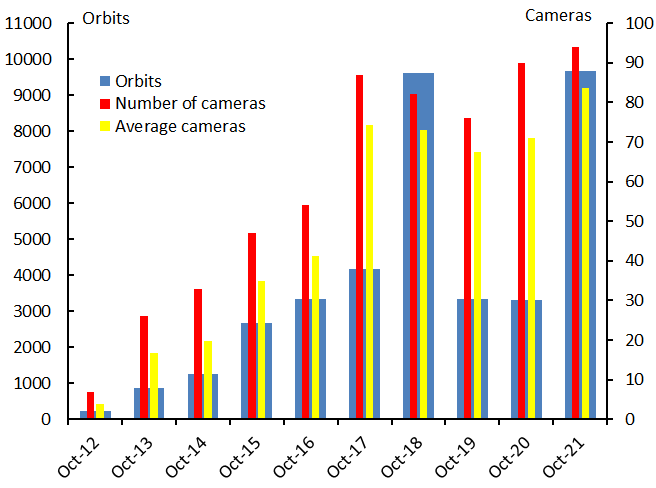 The weather at night in October 2021 was in general favorable for CAMS BeNeLux. The large number of operational cameras, including several new RMS cameras combined with the favorable weather resulted in a new record number of orbits for the month of October.

Many thanks to all participants in the CAMS BeNeLux network for their dedicated efforts. This report is based on the data from the CAMS-website. The CAMS BeNeLux team was operated by the following volunteers during October 2021: