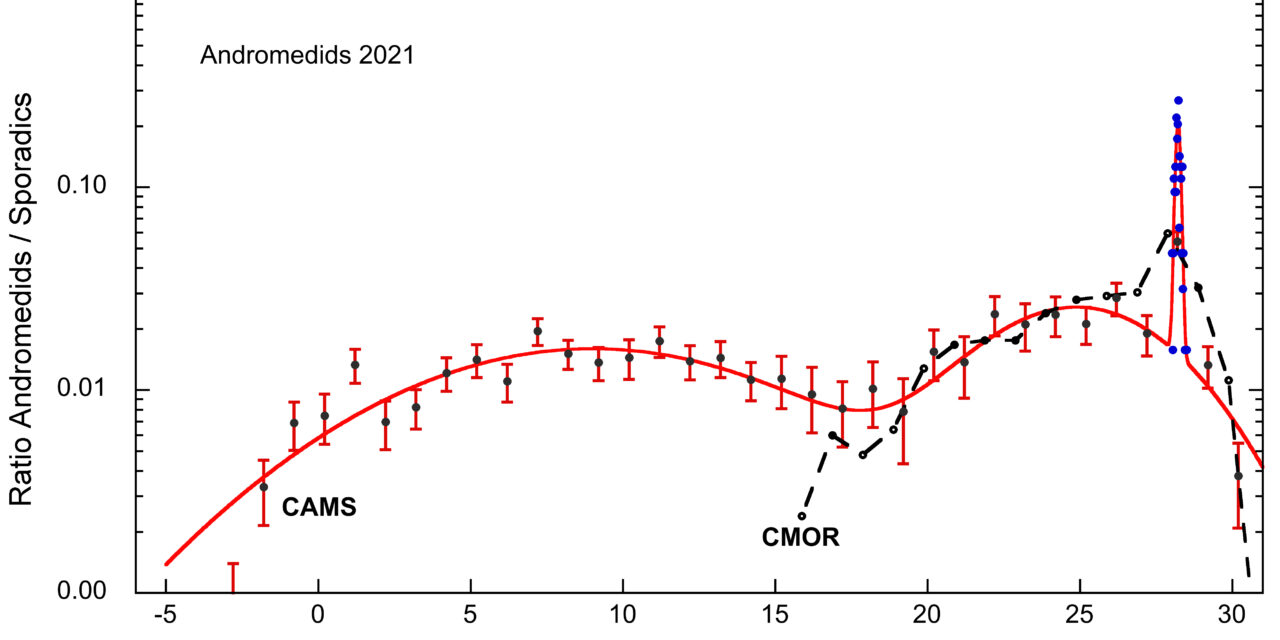 During most years the Andromedids display a low annual activity in early November. This meteor shower  is best known from the impressive meteor storms in 1872 and 1885 that occurred shortly after the fragmentation of parent comet 3D/Biela (Jenniskens, 2006). In recent years, unusual Andromedid activity has been detected in late November and early December in 2011 and 2013 (Wiegert et al., 2013; Brown, 2013). The exact cause of those events is a topic of active research. Now, a new outburst was detected that may help find an answer.

The Andromedid activity, a northern hemisphere shower, was monitored by the northern hemisphere networks of the CAMS video-based meteoroid orbit survey. Meteor trajectories were calculated from low-light video observations (Jenniskens et al., 2011). Most video-detected meteors are of magnitude +4 to -5. Radiant positions and speed are reported in near-real time at: http://cams.seti.org/FDL/

In recent years, the CAMS BeNeLux and LO-CAMS networks have included the use of the CAMS-compatible RMS cameras and the triangulations among those RMS cameras are also reported by the Global Meteor Network (Vida et al., 2021). That network also detected the enhanced Andromedid activity. Results are reported at: https://globalmeteornetwork.org/data/

Northern hemisphere meteor showers are also monitored by the Canadian Meteor Orbit radar (Brown et al., 2008). The radar is sensitive to about +5 to +10th magnitude meteors caused by smaller particles than are detected by video. Radiant and speed results are reported in near-real time at: https://fireballs.ndc.nasa.gov/cmor-radiants/

We reported earlier that the first Andromedid activity in 2021 was detected on October 28, gradually increasing to a broad maximum around November 9. After that, rates declined until a reversal occurred and rates started to increase again (Jenniskens, 2021a, 2021b).

On November 28, CMOR detected a strong outburst from the Andromedid shower (Figure 1). Brown (2021) reported by tweet that the outburst was “very rich in fainter meteors. Peak occurred between 6-7 UT, Nov 28 with ZHRs in excess of 100. Hundreds of AND orbits have been recorded. Strongest outburst of AND ever detected by CMOR. AND activity has been high as measured by CMOR the last 10 days, but plateaued in previous 4 days. Last night’s sharp outburst was several times above the broad outburst peak of the last days.” 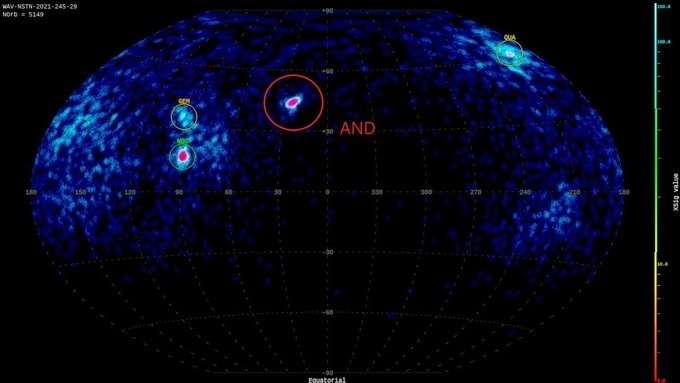 Figure 1 – The Andromedid 2021 outburst recorded by CMOR on November 28.

That night, the CAMS video-based meteoroid orbit surveys in Arizona and California had clear weather and triangulated 122 Andromedids between 1h30m and 11h55m UTC (See Figure 2 and http://cams.seti.org/FDL/ for the date of 2021 Nov. 28). 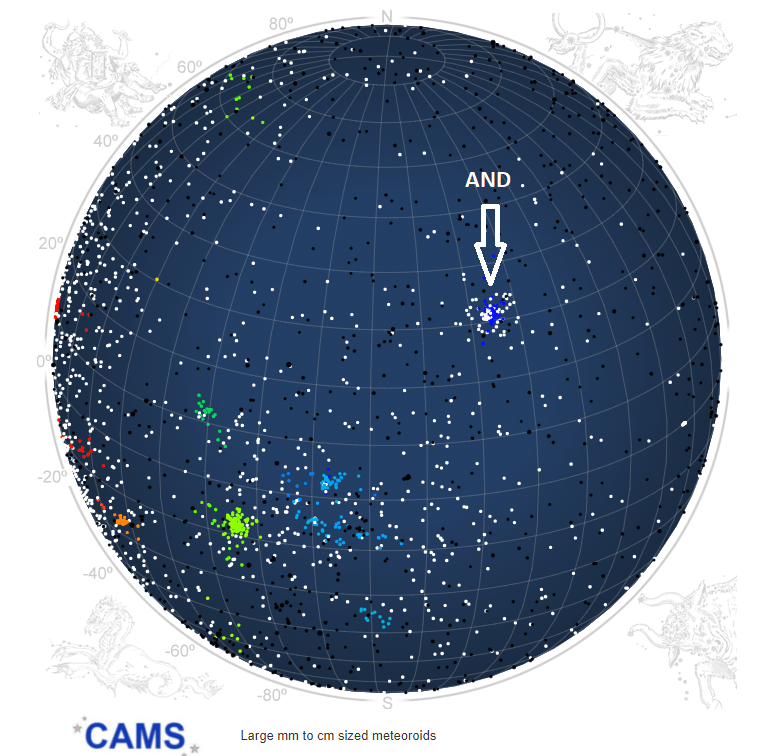 Figure2 – The high Andromedid activity created a dense cluster of radiant points on the map.

The graph also shows the raw CMOR counts for each day, which were offset to align with those of CAMS. Note that CMOR followed the CAMS-detected increase of rates after Nov 20 and also detected the spike in activity. The CMOR-detected spike appears broader, but it probably isn’t. The time-dependence of that spike and the actual peak CMOR rate on November 28 are unresolved in the published figures. 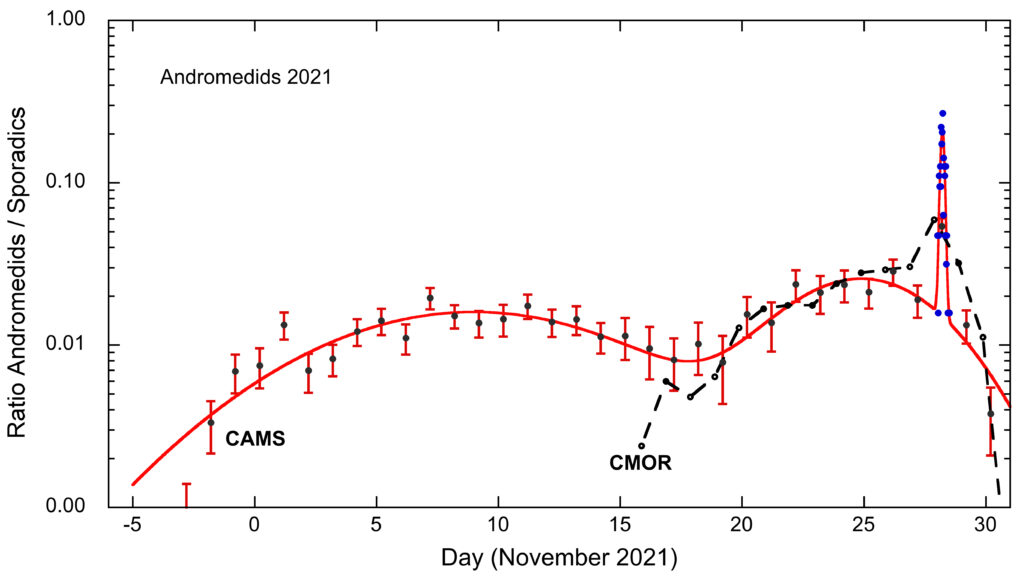 Figure 3 – The Andromedid 2021 rates relative to the sporadic background, recorded by CAMS and CMOR.

Most were faint meteors with a steep magnitude distribution index 3.8 ± 0.3. The mean magnitude of the CAMS-detected Andromedids was +1.6. The outburst could be seen also by the naked eye in clear dark skies where the radiant was above the horizon at that time.

Starting on December 1, the CMOR detected Andromedid rate has significantly decreased. CAMS is still seeing some Andromedids. Based on past CAMS-detected outburst activity (see “Past Data” on http://cams.seti.org/FDL/), the shower may remain active until about Dec. 6.

The cause of the sharp peak and the broad underlaying outburst components are not yet explained. Based on a model that explained the 2011 and 2013 outburst activity with dust trail encounters of the 17th century ejecta prior to the discovery of 3D/Biela (Wiegert et al., 2013), there was no unusual activity expected for 2021. It is possible that the 2021 activity disproves that explanation.

The November 28, 2021, outburst occurred at a solar longitude slightly below that of the 1872 (247.713) and 1885 (247.336) meteor storms. The past Andromedid storms were due to the active fragments of 3D/Biela in the 1846 and 1852 returns (Jenniskens & Vaubaillon, 2007), not due to dust generated in the fragmentation of 3D/Biela itself. Perhaps that dust played a role in the activity observed this year. It is also possible that the final breakup of 3D/Biela after the last sightings may be responsible, or even other activity that predates the first sighting of the comet.

Acknowledgements – Congratulations to all CAMS station operators for this interesting detection.