Abstract: A summary of the activity of the CAMS BeNeLux network during the month of January 2022 is presented. This month gave many cloudy nights due to a persistent moisty type of weather. Especially the northern parts suffered from this weather, with sometimes 5 consecutive totally clouded nights. A total of 12018 meteors were registered of which 4741 multi-station meteors, good for 1744 orbits.

Although there is approximately 15 hours of darkness in January in the BeNeLux, this month isn’t a month with high scores for our network. Meteor activity is still at a fairly good level, but weather isn’t cooperating most of the time. 2022 unfortunately wasn’t an exception.

January 2022 was very mild, with a mean temperature above 5 degrees Celsius. This is not a good sign for astronomical observations. Observations of our network were hampered by clouds during many nights. Complete clear nights were very rare this month for most parts of the BeNeLux. Especially the northern parts of the BeNeLux saw many nights that were completely clouded out, sometimes 5 nights in a row as from January 11 – 16 and again from January 21 – 26.

More southern parts were a bit luckier, but there too, many nights remained clouded or only partly clear nights. This has an effect on the efficiency of cameras on different sites in the BeNeLux. Table 1 gives data for two stations in our network. Hengelo (HL) in the northeastern parts of the Netherlands and Mechelen (ML) in the central part of Belgium. Both sites have Watecs and RMS-cameras that are working 7 nights on 7. But from Table 1 the disadvantage of Hengelo in collecting data this month, is clearly visible. As can be seen from this table, RMS cameras are more productive than Watecs, but in regions with much light pollution the difference seems not to be very large. 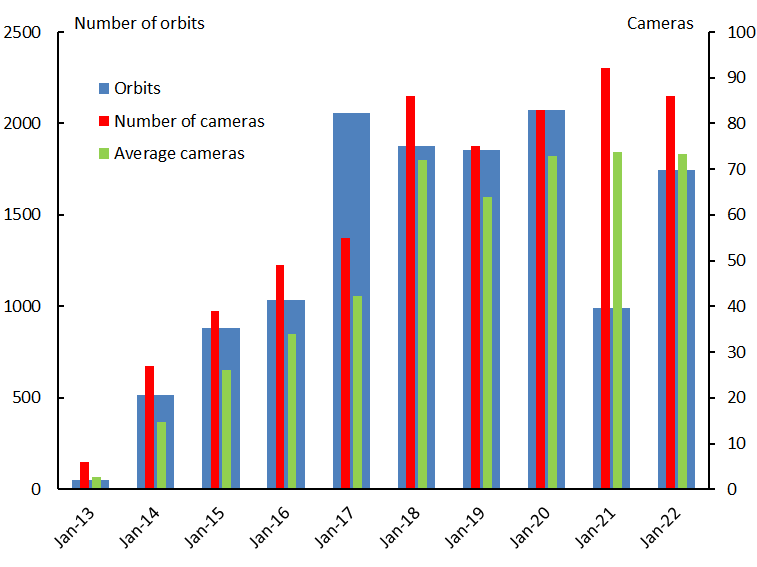 CAMS BeNeLux collected 12018 meteors of which 4741 or 39% multi-station meteors this month, resulting in a total of 1744 orbits, mainly from more southern locations in some clear spells. On the other hand, we had only three nights with no orbit at all this month.

As a consequence of the variable circumstances, nearly 60% of our orbits were derived from only two stations which is a fairly high number.

The lack of totally clear nights is the explanation for these numbers. For instance, the station of Hengelo, the Netherlands, had 13 fully clouded nights despite 7 on 7 coverage. At Mechelen, Belgium, only 4 nights were fully clouded this month.

The results for January 2022 are the fifth best during 10 years of CAMS BeNeLux.

Many thanks to all participants in the CAMS BeNeLux network for their dedicated efforts. The CAMS BeNeLux team was operated by the following volunteers during the month of January 2022: 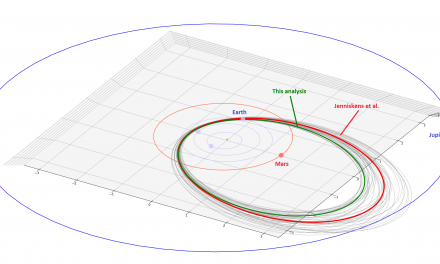