Abstract: A summary of the activity of the CAMS BeNeLux network during the month of February 2022 is presented. This month was good for a total of 5770 multi-station meteors resulting in 1939 orbits. Most of them were collected during the last ten days of this month.

Meteor activity in February is nearly at the lowest level for northern latitudes. After a poor month of January, we hoped for some improvement this month.

In February the gloomy weather continued until February 20 for most of our stations. Mean temperatures were again fairly high, due to lack of clear skies during the night. Once more the northern stations were hampered by long periods of overcast skies, where the more southern stations could at least get some results like on February 7–9, and February 16,18 and 19.

The last week however weather improved significantly, culminating in complete clear and transparent nights towards the end of the month.

CAMS-BeNeLux collected 5770 multi-station meteors this month, resulting in a total of 1939 orbits, 1154 of them in the last 8 nights, or nearly 60% of the total amount of orbits this month.

The number of orbits derived from more than two stations remained at the low level of approximately 60% during the first three weeks. As a result of the clear and transparent last period of February, this percentage increased to nearly 70% then.

On average 63.7 cameras were active during the nights this month. This number is lower than last year, because for different reasons some stations were only partly operational or not at all active this month. Prospects are good however that stations at Burlage, Gent, Zoersel and Alphen will deliver results again in the near future. In Humain a new camera was added to the network, delivering results since 8 February. Some more new cameras will be added to our network in the coming weeks. 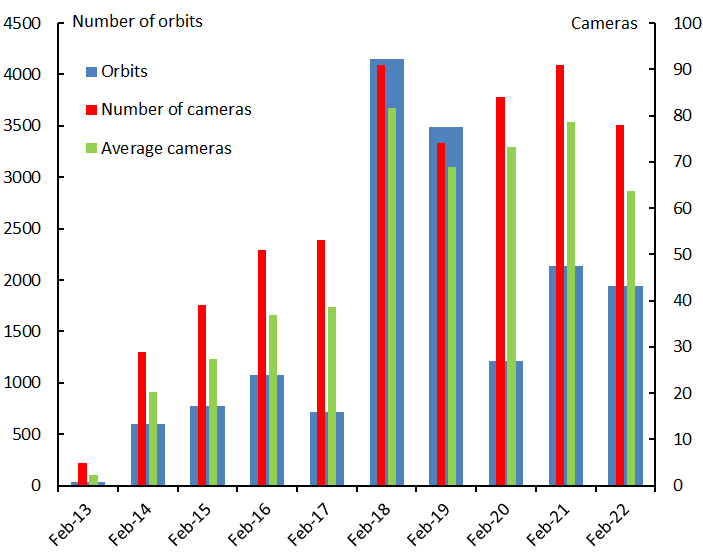 The results for February 2022 are the fourth best during 10 years of CAMS BeNeLux.

Many thanks to all participants in the CAMS-BeNeLux network for their dedicated efforts. The CAMS-BeNeLux team was operated by the following volunteers during the month of February 2022: