Abstract: A summary of the activity of the CAMS BeNeLux network during the month of April 2022 is presented. This month was good for a total of 8363 multi-station meteors resulting in 2543 orbits.

In April we welcome the first well-known meteor shower since the Quadrantids in early January, but in general meteor activity is still low for northern latitudes this month.

The month started with very poor weather, resulting in three successive nights with no simultaneous meteors at all on April 4, 5 and 6.

Weather improved after the first half of the month, so the Lyrid activity could be monitored very well from the BeNeLux.

April 2022 showed two faces. During the first 10 nights observations at many stations were hampered by cloudy weather. During 7 nights in this period, we collected 493 orbits, a large part of this score during one clear night, April 2–3 with 144 orbits. After the first half of the month the weather improved and in this period we collected more than 2000 orbits.

CAMS-BeNeLux collected 8363 multi-station meteors this month, resulting in a total of 2543 orbits. Most meteors were of sporadic origin or from minor showers. Activity of the minor showers zeta Cygnids (ZCY, #0040), alpha Virginids (AVB, #0021) and mu Virginids (DLI, #0047) is clearly visible in the data.

In the second half of April, we see activity popping up from a few major showers too.

The number of orbits derived from more than two stations was at a fairly high level of approximately 72.3%.

On average 77.2 cameras were active during the nights this month. This number is lower than last year (81.1), because for different reasons some stations were still not active at all this month. 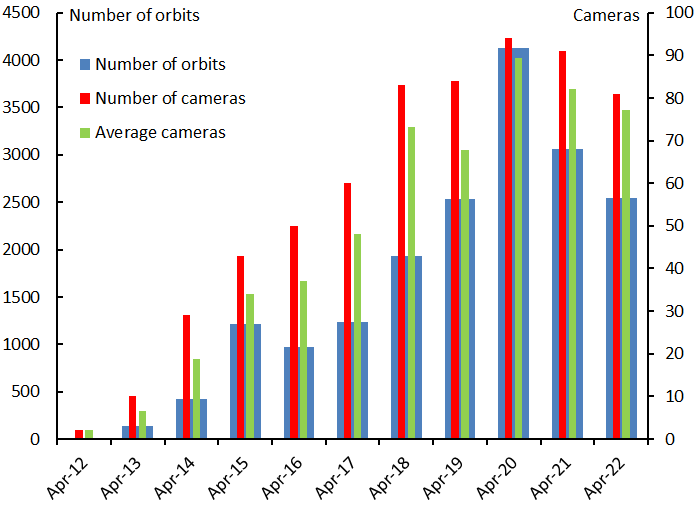 In May the stations at Ermelo and Zoersel are expected to deliver results again.

In Assenede (Belgium) a new camera was added to the network on April 14th by Günther Boerjan, Steve Rau and Paul Roggemans. This new RMS camera has been installed at the observatory “De Polderster” at Boekhoute (part of Assenede).

More new cameras will become active in the near future.

The results for April 2022 are the third best during 10 years of CAMS BeNeLux.

Many thanks to all participants in the CAMS-BeNeLux network for their dedicated efforts.

The CAMS BeNeLux team was operated by the following volunteers during the month of April 2022: 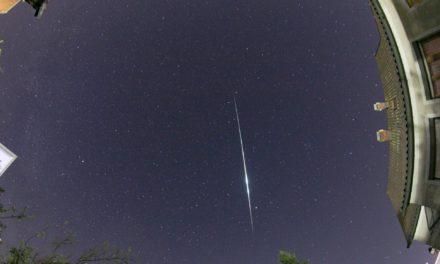 The Lyrids and a minor antihelion outburst in 2020