Abstract: A summary of the activity of the CAMS BeNeLux network during the month of June 2022 is presented. 14179 meteors were registered of which 7739 multiple-station events, resulting in 2228 orbits. June 2022 was the second best month of June in the 11 years of the network.

The first weeks of June display very low meteor activity while we get the shortest nights of the year with between 7 hours and less than 6 hours of capture time. Therefore, no spectacular numbers of orbits are to be expected. Collecting orbits under these circumstances remains a challenge. What did June 2022 bring us?

June is the most difficult month for CAMS BeNeLux because of the short observing window of barely 5 to 6 hours dark sky each night. June 2022 was an exceptionally favorable month for astronomy with many clear nights and nights with partial clear sky. 14179 meteors were registered, 7739 of which were multi-station events good for 2228 orbits. Not a single night remained without any orbits (8 without orbits in June 2021, 3 in June 2020). Ten nights resulted in more than 100 orbits in spite of the short duration of these nights (3 in June 2021, 8 in June 2020). This is an excellent result but not as good as in 2019 when 13 nights had more than 100 orbits and two nights had even more than 200 orbits. The best night for June 2022 was June 27–28 with 182 orbits. The statistics for June 2022 are compared in Figure 1 and Table 1 with the same month in previous years since the start of CAMS BeNeLux in 2012. 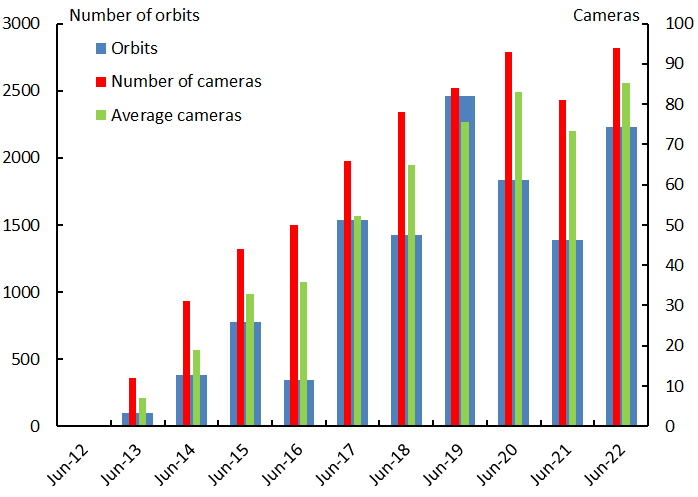 A new 6mm RMS camera (3824) got operational at the observatory “De Polderster” at Boekhoute on 11 June. Unfortunately, 8 nights later a local problem with the electric power made its sd-card crash as well as that of its twin RMS camera (3823) which was already operational since April. A British 4mm RMS camera (UK0004) operated by Jim Rowe in Eastbourne started to deliver data to CAMS BeNeLux since 21 June with CAMS id 3829.

Table 2 – The twenty cameras of the CAMS BeNeLux network with the best score in terms of orbits during the month of June 2022, with the scores within GMN for the RMS cameras.

With comparable weather in 2022, we concluded June with about 10% less orbits than in 2019 although we had 10 cameras more than in 2019. The most likely explanation for this is that since a while the CAMS trajectory solver, Coincidence, rejects all meteors detected lower than 25° above the horizon. The reason for this blind cut-off is to reduce the number of poor triangulations due to large distances between the cameras and meteors although this also rejects the good triangulations at lower altitude. With the RMS cameras we see that the GMN trajectory solver in general rejects more combinations than CAMS but still has a reasonable number of good quality triangulations at lower than 25° elevation. Since the CAMS trajectory solver is less advanced than that of GMN, it was decided to reject all low altitude meteors as CAMS cannot handle these properly.

The Belgian part of the network got 10 new RMS cameras installed since summer 2021 to improve the coverage on this region. Looking at the scores in terms of orbits for all cameras, the RMS cameras outnumber the Watecs in numbers of paired meteors (see Table 2). With a larger field of view, better astrometric calibration and a superior detection algorithm, the RMS cameras are a real game changer. The scores in the GMN for the RMS cameras are listed in Table 2 for comparison. CAMS Watec data is not accepted by GMN because the quality does not meet the GMN standards. With about half of the Dutch camera stations not functioning each night, the epicentrum of the network moved south. The June 2022 trajectories can be visualized on MeteorMap.

June 2022 was an excellent month for CAMS BeNeLux with the second-best score in number of orbits after 2019.

Many thanks to all participants in the CAMS BeNeLux network for their dedicated efforts. The data on which this report is based has been taken from the CAMS website. The CAMS BeNeLux team was operated by the following volunteers during June 2022: