The radiant (the area of the sky where meteors appear to shoot from) positions and rates listed below are exact for Saturday night/Sunday morning October 1/2. These positions do not change greatly day to day so the listed coordinates may be used during this entire period. Most star atlases (available at science stores and planetariums) will provide maps with grid lines of the celestial coordinates so that you may find out exactly where these positions are located in the sky. I have also included charts of the sky that display the radiant positions for evening, midnight, and morning. The center of each chart is the sky directly overhead at the appropriate hour. These charts are oriented for facing south but can be used for any direction by rotating the charts to the desired direction. A planisphere or computer planetarium program is also useful in showing the sky at any time of night on any date of the year. Activity from each radiant is best seen when it is positioned highest in the sky, either due north or south along the meridian, depending on your latitude. It must be remembered that meteor activity is rarely seen at the radiant position. Rather they shoot outwards from the radiant, so it is best to center your field of view so that the radiant lies at the edge and not the center. Viewing there will allow you to easily trace the path of each meteor back to the radiant (if it is a shower member) or in another direction if it is sporadic. Meteor activity is not seen from radiants that are located far below the horizon. The positions below are listed in a west to east manner in order of right ascension (celestial longitude). The positions listed first are located further west therefore are accessible earlier in the night while those listed further down the list rise later in the night. The Draconids (DRA) are expected to be active on October 8/9 this year. The radiant lies at 17:32 (263) +56. This position lies in southeastern Draco, very close to the position occupied by the faint star known as Kuma (nu Draconis). These meteors are best seen just as soon as it becomes dark on the evening of October 8. Face toward the north and look for any slow meteors shooting from near the head of Draco. With an entry velocity of 21 km/sec., the average Draconid meteor would be of very slow velocity. These meteors are poorly seen from the southern hemisphere due to the low radiant altitude seen from below the equator.

We are now encountering inbound debris from comet 2P/Encke, which has its source superimposed upon the anthelion radiant. Since it has been shown that meteors from 2P/Encke are more numerous than the Anthelions, we will recognize this activity as the Southern Taurids (STA) from now until early December, when we no longer encounter remnants from comet 2P/Encke. Like the anthelion radiant, the source area is large and diffuse so observers can be liberal with the shower association of these meteors. Recent investigations of the Southern Taurids have revealed two clearly distinct components. The first component represents the early and regular annual activity of Southern Taurids, and the latter component represents the main source of activity and is periodic. The early STA’s are active from September 28 through November 7 and peaks on October 16th. The main component of the STA’s are active from October 13 through December 2 and peaks on November 5*. The center of the large STA radiant is currently located at 01:51 (028) +07. This position lies in southeastern Pisces, 2 degrees southeast of the 4th magnitude star known as omicron Piscium. This radiant is best placed near 0100 LST, when it lies on the meridian and is located highest in the sky. To best see these meteors, face southward at this time. Rates at this time should be near 2 per hour no matter your location. With an entry velocity of 30 km/sec., the average STA meteor would be of medium-slow velocity.

The Orionids (ORI) are active from September 26 through November 22, with maximum activity occurring on October 21st. The radiant is currently located at 05:24 (081) +14, which places it in northern Orion, 5 degrees northwest of the 4th magnitude star known as lambda Orionis. This area of the sky is best placed for observing near 5:00 LST, when it lies highest in the sky. To best see these meteors, face toward the south near this hour of the night. Current rates are expected to be near 1 per hour, no matter your location. With an entry velocity of 68 km/sec., the average ORI meteor would be of swift velocity.

The epsilon Geminids (EGE) are active from a radiant located at 05:48 (087) +30. This area of the sky lies in southern Auriga, 4 degrees northeast of the 2nd magnitude star known as El Nath (beta Tauri). To best see these meteors, face toward the east during the last dark hour prior to dawn. These meteors are active from September 27 through November 8, with maximum activity occurring on October 19. Since maximum is still three weeks away, rates at this time should be less than 1 per hour no matter your location. With an entry velocity of 70 km/sec., the average EGE meteor would be of swift velocity.

The last of the September Lyncids (SLY) are expected this weekend from a radiant located at 07:40 (115) +47. This position lies in central Lynx, 2 degrees southeast of the pair of faint stars known as 21 and 22 Lyncis. This position is also 15 degrees north of the 2nd magnitude star known as Castor (alpha Geminorum). To best see these meteors, view toward the northeastern sky during the last hour prior to dawn. Rates are expected to be less than 1 per hour. With an entry velocity of 66 km/sec., the average meteor from this source would be of swift velocity.

The tau Cancrids (TCA) are a weak shower with a long activity period of seven weeks. They are active from September 23 through November 12 with maximum activity occurring on October 20th. The radiant currently lies at 08:03 (121) +29, which places it in eastern Gemini, 4 degrees northeast of the 1st magnitude star known as Pollux (beta Geminiorum). To best see these meteor face eastward during the last two hours of the morning prior to dawn. Expected hourly rates are less than 1 per hour no matter your location. With an entry velocity of 67 km/sec., the average TCA meteor would be of swift velocity.

The Daytime Sextantids (DSX) are active from September 22-October 13, with maximum activity occurring on October 3. The current position of the radiant is 10:23 (156) -03. This position lies in central Sextans, 3 degrees southwest of the faint star known as beta Sextantis. Rates at this time should be less than 1 per hour no matter your location. With an entry velocity of 32 km/sec., the average DSX meteor would be of medium-slow velocity. No matter your location, these meteors are difficult to observe as the radiant lies roughly 30 degrees from the sun. Therefore, these meteors may only be seen during the last hour prior to dawn, shooting upward from the eastern horizon.

The October Camelopardalids (OCT) are a recent discovery due to an outburst recorded by video cameras in 2005. Activity has occurred every year since and visual observers should be able to detect these meteors. This source is active from October 5-7 with maximum falling on the 6th. The radiant position lies near 11:09 (167) +79. This area of the sky is located in a barren area of extreme northeastern Camelopardalis. The easiest way to pinpoint the radiant is to extend a line eastward from the bottom two stars of the “bowl of the Little Dipper”. Extend another line northward from the “pointers” of the Big Dipper. Where these lines intersect is the location of the radiant. This area of the sky is above the horizon all night long but is best seen during the last dark hour before dawn when the radiant lies highest in a dark sky. Rates are expected to be low except near maximum activity. Due to the location near the northern pole, these meteors are not visible from the southern hemisphere. With an entry velocity of 45 km/sec., the average meteor from this source would be of medium velocity. 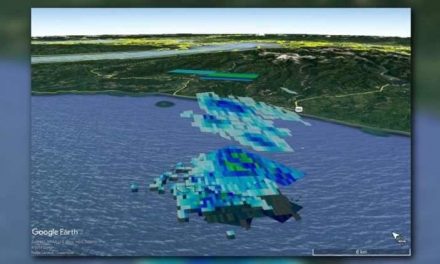