A summary of the activity of the CAMS BeNeLux network during the month of November 2022 is presented. This month we collected a total of 17401 multi-station meteors resulting in 5635 orbits.

In November the chances for long periods of clear weather are getting rather small. Only under specific favorable circumstances the BeNeLux can count on a longer series of clear nights.

Meteor activity is still very high this month, due to high sporadic activity and the visibility of meteoroid streams like the Taurids and the Leonids. So, it is interesting to see what this month would bring us.

Until November 25, weather remained stable, with lots of sunshine, resulting in good results for our network. Afterwards, the weather turned more and more gloomy. Only a handful of orbits in this period could be collected. Not a single orbit could be obtained during November 27–28.

This month CAMS BeNeLux collected a total of 17401 multi-station meteors, resulting in 5635 orbits. This is a second-best score for this month. Only in November 2018 more orbits were collected (Figure 1 and Table 1).

In particular November 4–5, 11–12 and 13–14 got good results with more than 500 orbits in each night, due to clear conditions in these nights. The highest number of orbits were collected on November 13–14, 576 orbits.

52% of all orbits were collected by at least 3 stations. Once again, like in October, this emphasizes good coverage of the skies over the BeNeLux. On average 86.2 cameras were active each night, with a maximum of 94 cameras and a minimum of 69 cameras. These numbers are comparable to the situation of previous month. We hope that the camera stations such as Terschelling and Burlage can rejoin the efforts of the network soon. 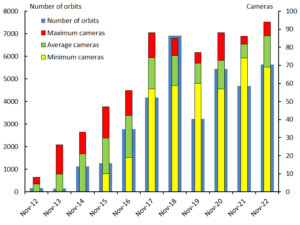 Table 1 – Number of orbits and active cameras in the BeNeLux during November 2012–2022.

Results for November 2022 are among the best in the 11 years of the existance of the CAMS BeNeLux network.