The radiant (the area of the sky where meteors appear to shoot from) positions and rates listed below are exact for Saturday night/Sunday morning January 14/15. These positions do not change greatly day to day so the listed coordinates may be used during this entire period. Most star atlases (available at science stores and planetariums) will provide maps with grid lines of the celestial coordinates so that you may find out exactly where these positions are located in the sky. I have also included charts of the sky that display the radiant positions for evening, midnight, and morning. The center of each chart is the sky directly overhead at the appropriate hour. These charts are oriented for facing south but can be used for any direction by rotating the charts to the desired direction. A planisphere or computer planetarium program is also useful in showing the sky at any time of night on any date of the year. Activity from each radiant is best seen when it is positioned highest in the sky, either due north or south along the meridian, depending on your latitude. It must be remembered that meteor activity is rarely seen at the radiant position. Rather they shoot outwards from the radiant, so it is best to center your field of view so that the radiant lies at the edge and not the center. Viewing there will allow you to easily trace the path of each meteor back to the radiant (if it is a shower member) or in another direction if it is sporadic. Meteor activity is not seen from radiants that are located far below the horizon. The positions below are listed in a west to east manner in order of right ascension (celestial longitude). The positions listed first are located further west therefore are accessible earlier in the night while those listed further down the list rise later in the night. The large Anthelion (ANT) is currently centered at 08:28 (127) +19. This position lies in central Cancer, just north of the faint star known as theta Cancri. Due to the large size of this radiant, these meteors may also be seen from eastern Gemini and western Leo as well as Cancer. This radiant is best placed near 01:00 local standard time (LST) when it lies on the meridian and is highest in the southern sky. Rates at this time should be near 2 per hour as seen from the northern hemisphere and 1 per hour as seen from south of the equator. With an entry velocity of 30 km/sec., the average Anthelion meteor would be of slow velocity.

The alpha Hydrids (AHY) were discovered by Dr. Peter Brown and are mentioned in his article “A meteoroid stream survey using the Canadian Meteor Orbit Radar”. This shower is active from December 15 through January 22 with maximum activity occurring on January 5th. The radiant is currently located at 08:58 (134) -11. This position lies in western Hydra, 5 degrees southwest of the 2nd magnitude star known as Alphard (alpha Hydrae). These meteors are best seen near 0200 LST when the radiant lies highest above the southern horizon. At 42 km/sec. the alpha Hydrids produce meteors of medium velocity. Expected rates this week are less than 1 per hour no matter your location.

The Omicron Leonids (OLE) were also discovered by Damir Šegon and the Croatian Meteor Network team based on studying SonotaCo and CMN observations (SonotaCo 2007-2011, CMN 2007-2010). These meteors are active from December 20 through January 22. Maximum activity occurs on January 9th. The radiant is currently located at 09:34 (143) +09. This position lies in southwestern Leo, 2 degrees southwest of the faint star known as omicron Leonis. These meteors are best seen near 0200 LST when the radiant lies highest above the southern horizon. At 43 km/sec. the omicron Leonids produce meteors of medium velocity. Expected rates this week are less than 1 per hour no matter your location.

The January xi Ursae Majorids (XUM) were discovered by Japanese observers of SonotoCo based on video observations in 2007-2008. This shower is active from January 10-25, with maximum activity occurring on the 19th. The radiant is currently located at 11:10 (168) +34, which lies on in southern Ursa Major, 2 degrees northwest of the 3rd magnitude star known as Alula Borealis (nu Ursae Majoris).  These meteors are best seen near 04:00 LST when the radiant lies nearly overhead. Hourly rates may reach 1 later in this period as seen from the Northern Hemisphere. These meteors encounter the atmosphere at 42 km/sec., which would produce meteors of medium velocity.

The Comae Berenicids (COM) is a shower of long duration active from December 5th all the way through February 4th. Maximum occurred near December 19th when rates may have reached 3 an hour. During this period, I would expect hourly rates of 1 from a radiant located at 12:19 (185) +19. This position lies in central Coma Berenices, 1 degree north of the faint star known as 11 Comae Berenices. These meteors are best seen near 0400 LST when the radiant lies highest above the southern horizon. At 63 km/sec. the Comae Berenicids produce mostly swift meteors. These meteors are also known as the December Leonis Minorids.

The eta Corvids (ECV) were recently discovered by Sirko Molau and the IMO Video Meteor Network Team. This stream is active from January 7-February 5, with maximum activity occurring on January 21st. The current position of the radiant is 12:23 (186) -17, which places the radiant in central Corvus, 1 degree west of the 3rd magnitude star known as Algorab (delta Corvi). These meteors are best seen near 0500 LST when the radiant lies highest above the southern horizon. Current hourly rates would be less than 1 per hour no matter your location. At 68 km/sec. these meteors would be fast.

The gamma Ursae Minorids (GUM) are another source discovered by Dr. Peter Brown and associates. These meteors are active from January 10-22, with maximum activity occurring near January 18. The radiant is currently located at 14:56 (224) +69, which places it southern Ursa Minor 3 degrees southwest of the 3rd magnitude star known as Pherkad (gamma Ursae Minoris). These meteors are best seen during the last few hours before dawn, when the radiant lies highest above the northern horizon. Rates may reach 1 per hour on the morning of the 18th as seen from the Northern Hemisphere. Unfortunately these meteors are not visible from the Southern Hemisphere. These meteors encounter the atmosphere at 31 km/sec., which would produce meteors of medium-slow velocity.

The December sigma Virginids (DSV) is a source of long duration discovered by John Greaves using the data of SonotaCo. This source is active from November 26 through January 24 with peak rates occurred near December 21st. The current radiant location is at 15:11 (228) +00 which places it on the border of Virgo and Serpens Caput, 3 degrees southeast of the faint star known as 110 Virginis. Current hourly rates would be less than 1 no matter your location. These meteors are best seen during the last dark hour before dawn, when the radiant lies highest above the southeastern horizon. At 66 km/sec. the December Sigma Virginids would produce mostly swift meteors.

The xi Coronae Borealids (XCB) are yet another source discovered by Dr. Peter Brown and associates. These meteors are active from January 9-20 with maximum occurring near January 15. The radiant is currently located near 16:40 (250) +30, which places it in western Hercules, 1 degree south of the 3rd magnitude star known as zeta Herculis A. Hourly rates would be less than 1 per hour no matter your location. These meteors are best seen during the last hour before dawn, when the radiant lies highest above the eastern horizon in a dark sky. At 45 km/sec. this source would produce meteors of medium velocity. These meteors are not well seen from the Southern Hemisphere as the radiant lies low in the northeastern sky at dawn.

Those interested in detecting meteor via radio waves may start noticing activity from the Capricornid/Sagittarids (DCS). These meteors can be detected from January 13 through February 4, with maximum activity occurring near February 1st. These meteors would be best detected during the morning hours of 8-10am, when the radiant lies approximately half-way up in the sky. It should be noted that meteors do not emit radio waves, but they act as mirrors and reflect radio waves from distant transmitters which aren’t heard otherwise. This is called forward scatter, opposed to backscatter where the transmitter and receiver are at the same place (radar). For practical reasons the frequency range 50 – 150 MHz (wavelength 6 m – 2 m) is used. This includes amongst others the FM band and TV transmitters which haven’t switched yet to digital. Most reflections are short (less than a second), but brighter meteors can cause reflections lasting minutes. The shortest radio reflections are caused by faint meteors, fainter than visual ones. Radio reflections can be observed regardless of daylight or clouds, allowing more complete views of streams. For those interested in meteor observing via radio waves we invite you to visit RMOB. 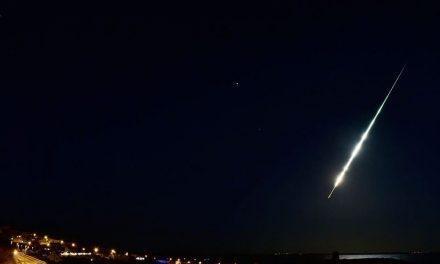