Introduction
A number of meteor showers were on the agenda for the fall of 2022. The Orionids under virtually moonless nights, the moonlit Taurids whose southern branch would give increased activity (a so-called Asher year), the Leonids and of course the Geminids. The latter would also be visible under moonlight conditions. The autumn in previous years did not excel in many clear nights. The last year in which relatively much could still be observed in the fall was 2018. So expectations were not high. After the extremely successful Perseid action in the Netherlands, observations started again at the end of September.

September 21/22, 2022
A short session from the meteor roof at home. Observed between 22:37 and 01:40 UT. A somewhat light sky background. Quite low numbers of meteors for September, in 3 hours effective observation time I counted 23 meteors of which 1 Chi Cygnid and 4 southern Taurids. A few bright meteors were seen.

September 28/29, 2022
Another session from the meteor roof. Between 01:00 and 04:08 UT, 3.07 hours were observed with limiting magnitudes between 6.2 and 6.3. It yielded 34 meteors including 2 Delta Aurigids, 3 Southern Taurids and 2 possible Orionids. A very slow meteor in the second hour could be an early Draconid. The most beautiful meteor was a slow magnitude 0 sporadic meteor in the Big Dipper.

02/03 October 2022
A clear night ahead on my weekend. So I prepared myself for a longer session from the Groevenbeekse Heide. Unfortunately, it turned out to be a lot of fog there, so I decided to try it at home. That is the big advantage: no fog (I am high up there) and I could observe undisturbed for more than 3.5 hours. Observations were done between 00:12 and 04:11 UT. The first 1.5 hours there was low activity, the last two hours were quite good. A total of 39 meteors were counted, of which 4 delta Aurigids, 4 southern Taurids and 2 Orionids.
Quite some bright meteors, including a magnitude 0 Orionid, 0 sporadic meteor, an orange 0 delta Aurigid, and a -1 sporadic meteor.

05/06 October 2022
Another clear morning. Observations again from the meteor roof because of fog. This night, the obscure small meteorshower the October Camelopardalids (281 OCT) was active, possibly originating from a long-period comet. The meteorshower is barely active for a day, the maximum was expected on October 6 around 04:00 UT. Observations were carried out between 02:09 and 04:20 UT. Indeed, 4 OCT meteors (magnitudes +2, +3, +3, +4) were seen. CAMS BeNeLux also picked up these meteors. It is true that if you do not know about this meteorshower, you would easily miss it as a visual observer.
A total of 31 meteors were counted in 2.07 effective hours at a limiting magnitude of slightly above 6.2. In addition to the 4 OCT, 4 Delta Aurigids, 1 Southern Tauride and 2 Orionids were also seen. A magnitude 0 sporadic meteor was the most beautiful appearance.

October 18/19, 2022
Another clear night, with cirrus moving in from the south during the night. Observations took place between 22:35 and 01:03 UT. The author switched from a southern to a northern field of view in the last hour due to slowly advancing cirrus.
Radio observers report a radio peak from the Orionids on the evening of October 18, so there was a possibility to see something from Europe. It looked like the 1993 Orionid outburst which I could see in full regalia and showed a lot of bright Orionids. This year, this is not apparent from the observations of the author. With only 8 Orionids counted, most of them faint, which is what you would expect during a “normal” Orionid year. Unfortunately, the following nights were mostly cloudy in the Netherlands.

October 30/31, 2022
The Taurids were eagerly awaited. Between roughly October 25 and November 15, the southern branch should produce more fireballs than usual. For the author, 1981 and 2005 were especially good years in which fireballs of -8 and -10 appeared. More southern Taurids were also seen in 1995, 1998, 2012 and 2015, but these years were not as impressive with fireballs as 1981 and 2005.
Observations were only possible between 22:11 and 23:05 UT at a mean limiting magnitude of 6.2. Only 11 meteors were counted, including 3 southern and 1 northern Taurids. No bright ones.
The following nights were regularly clear, but often with cirrus. Indeed, relatively many beautiful Taurid fireballs were captured with the all sky camera during this period, the brightest being a magnitude -12 Taurid. 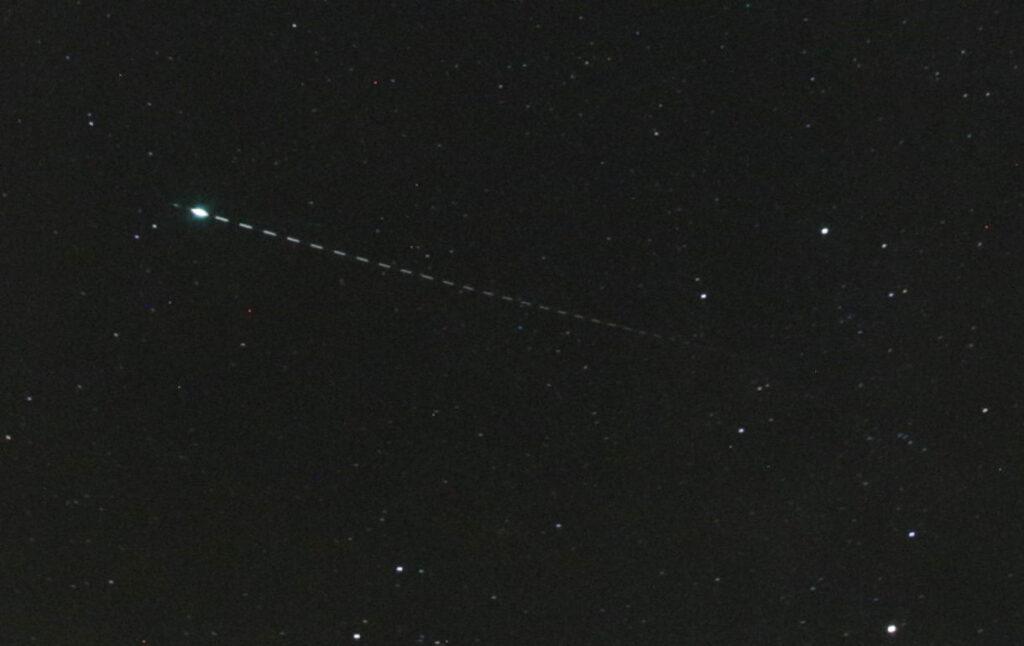 Figure 1. This beautiful southern Taurid with a magnitude -6 flare was captured on November 5, 2022 at 02:54:22 UT. Camera: Canon 6D with Sigma 8 mm F 3.5 lens (LC shutter 16 breaks per second). Two other all sky stations located at Bussloo and Woold captured this Taurid simultaneously. 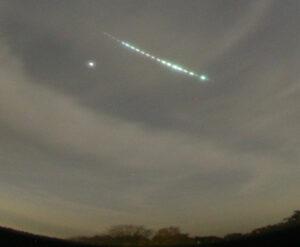 Figure 2. This beautiful magnitude -12 southern Taurid was captured on the cirrus-laden night of November 10/11, 2022. Camera: Canon 6D with Sigma 8 mm F 3.5 lens (LC shutter 16 breaks per second). Many other all sky stations in the BeNeLux captured this one.

Geminids: only when it’s freezing cold….

The first weeks in December 2022 were rather chilly. Despite an almost full moon the period around the Geminids maximum was monitored to see if the weather allowed observations. Some freezing nights were expected in which the sky could clear up. Indeed, there was relatively much clear weather in the week around the Geminid maximum. Given the expected moonlight and often bad conditions in December, I had not asked for a day off from work so the observations would be limited.

Clear sky almost all night. Because the author had to work next day, it remained a limited session. The period was chosen when the radiant was the highest with the disadvantage of a lot of moonlight.  I signed on at 00:19 UT on the meteor roof at home, and observations ended at 03:20 UT. Temperatures dropped to -9 degrees Celsius. Fortunately, the hot water bottle was very handy to keep the feet warm. Limiting magnitude first 5.7 and then dropping to 5.5. The transparency was very good, which resulted in  a nice numbers of meteors, about 20 an hour. A total of 59 Geminids, 4 December Monocerotids, 4 Sigma Hydrids, and 2 Antihelions (also called Xi Orionids) were counted in an effective 3.02 hours. A pair of Geminids of magnitude -2 and -1 were the most beautiful meteors.

A difficult night. A weak cloudfront with mainly cirrus would move across the Netherlands from north to south. Clear spells were expected in Ermelo around 3 UT. Just before 0 UT the first clear spells became visible on the all sky images low north. However, the southward movement of the front was very slow. The alarm goes off around 01:30 UT. A look outside shows that the north has cleared but that the separation between clear air and cirrus was right near the zenith. Within twenty minutes I was on the roof with the observation direction north (also because of the moon of course). Without the cirrus the sky was nicely transparent with an lm of 5.6. However, the cloudfront wobbled a bit, which sometimes caused parts of cirrus to cross my field of view. Under these varying and cold (again -9 degrees Celsius) conditions, observations were made between 01:48 and 03:15 UT. After this, more cirrus from the west. But when I was cycling to work (4 UT) the cirrus front had already descended a bit further south and it was almost completely clear….

A total of 48 meteors were counted, of which 41 Geminids, December 2 Monocerotids and 1 Sigma Hydride.  Two Geminids of -2 and -1 were the most beautiful meteors. 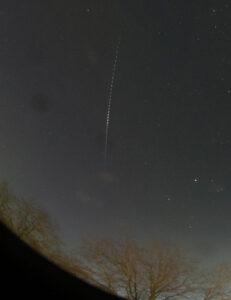 Because a clear night was predicted for December 14/15, I planned a short working day so that I was home on time and could catch some sleep before the observations started. And the next day Thursday is also a day off from work, so observations could be longer. However, I had obligations the next day so I couldn’t observe the whole night.

Given the strongly decreasing activity of the Geminids after the maximum, I decided to start early in the evening. As early as 18:02 UT, the all sky captured a very nice Geminid earthgrazing fireball. And 18 minutes later the observations started… The sky was transparent, but unfortunately partly spoiled by the sports lighting of football fields (one kilometer east) so that the limiting magnitude was around 6.0. This lasted until after 20 UT when the lights go out and the limiting magnitude suddenly jumped 3/10! A number of Geminids earthgrazers were seen.

Despite the lower limiting magnitude, nice numbers of Geminids were seen. The first hour it was still a bit low (because of the very low radiant position), but in the second hour more Geminids were visible. Meanwhile, the temperature reached -10 degrees Celsius! After 2.5 hours some clouds passed over and this was used to take a break and to provide the jug with hot water again. This was followed by another observation period of 2.5 hours. During that time about 30 Geminids were seen per hour despite the rising radiant, so indeed decreasing activity. Bright fireballs were not seen during this period, only two Geminids of magnitude -3. But, the all sky camera captured a very bright Geminid of -8 at 00:58 UT. In total  the all sky camera captured 16 Geminids this night. 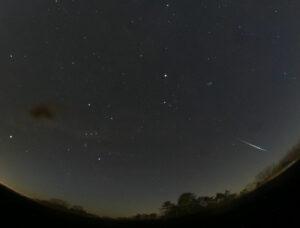 Figure 4. Brightest Geminid captured from Ermelo: December 15, 2022 at 00:58 UT. Camera: Canon 6D with Sigma 8mm F 3.5 lens (LC shutter 16 breaks per second). In this image (and almost all other images from December 12-15) a small spider (above the star Sirius) can be seen making a web on the fisheye lens. Visible as bands of light in Orion…. The web has since been removed…. 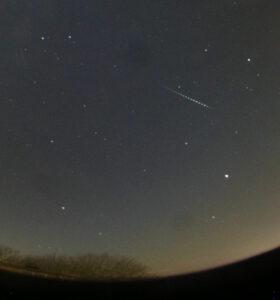 All in all, given the circumstances, a very successful Geminids action! Thanks to Jaap van ‘t Leven for checking my English. 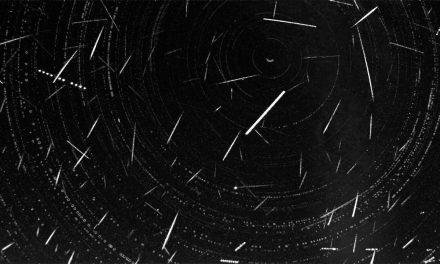 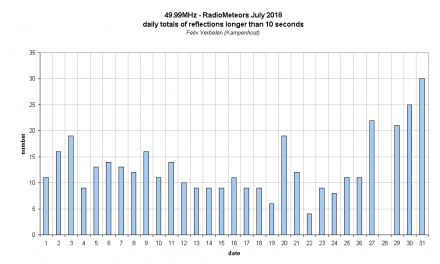