Absctract: We present the report on the radio observation of the Quadrantids shower recorded by the CARMELO (Cheap Amateur Radio Meteor Echoes LOgger) network.
As in the observations made in previous years, a complex structure is confirmed in which two secondary filaments are evident, before and after the main shower, the second of which appears to be composed of larger mass meteoroids.

Introduction
The Quadrantids are one of the largest of all the swarms the earth encounters in its annual orbit around the sun. It isn’t as well known as other showers, especially which occours in summer, due to the bad weather conditions that normally characterize its observation. Because of this, radio observation can assume greater importance by integrating the missing visual observations.
A further characteristic of this shower is that the progenitor body is most likely not a comet, but an asteroid: 2003 EH1. As it can be deduced from the name, this is a very recent discovery: before 2003, the Quadrantids progenitor body was unknown.
It is probably a fairly recent swarm: the first news dates back to observations of 1835 and this would explain its relative compactness, given that the duration of the swarm is approximately 24 hours.
Its orbit has a high inclination (>70°) and the velocity of the meteors is 41 km/sec, an average value in the wide range of meteor velocities.
The observation was carried out with the CARMELO (Cheap Amateur Radio Meteor Echoes LOgger) receivers network, already described (1) which currently consists of some receivers placed in Europe and in the USA (2).

The observation
The graph below shows both the hourly rate (in red) and the echoes duration (in blue). The measurements have a time resolution of one hour. 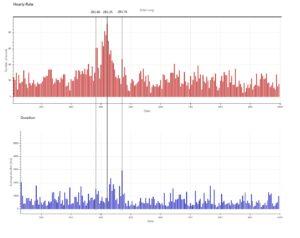 It can be seen that the phenomenon begins on the evening of January 4th and ceases on the following evening.
The first peak begins at solar longitude 282.86, the maximum occours at solar longitude 283.25 while the last peak is at solar longitude 283.76.
We note how the average duration of the meteoric echoes in the last filament is higher than in the previous two: an indication that suggests that the kinetic energy of these meteoroids is greater.
Since the particles speed is the same, we must therefore deduce that the meteoroids have a greater mass.
Wishing to compare these data with other observations in the past, we can refer to that of 2016 (3) even if it should be emphasized that it was collected by a single analog radio observer while those of this year, as mentioned above, are collected by digital receivers, with a greater number of devices and a greater territorial coverage.
The comparison shows a substantial correspondence between the two observations, both with respect to the number of filaments, their time location, and the increase in the mass index in the third and last filament.