The network started with 2 stations in the Netherlands. Oostkapelle (OK, CAMS 331 operated by Klaas Jobse) got a perfect double station partner with Ooltgensplaat (OP,  CAMS 341 operated by Piet Neels). They did the first couple of test runs during the nights of 14-15 and 26-27 March 2012. These were the first stations using PAL type cameras and the first network setup independently from the main network in California. The first 12 double station meteors were recorded in these two nights of March 2012.  On 25-26 April 2012 two more CAMS stations got their first orbit: Gronau (GN, CAMS 311 operated by Carl Johannink) with Hengelo as partner (HL, CAMS 321 operated by Martin Breukers). The distance between these stations was a less favorable but still suitable baseline.

Once the first stations got started and after a lot of problem solving, more amateurs joined the CAMS network. Koen Miskotte joined the network 18-19 August 2012 (351, Ermelo) and Robert Haas joined 26-27 October 2012 (361, Alphen aan de Rijn). End 2012 the CAMS BeNeLux network had 10 operational cameras at 6 stations and had collected 1079 orbits. This result exceeded by far all expectations. During 2013 the network expanded further up to 26 cameras at 10 stations, good for another 5684 orbits. Some network participants took their Watecs abroad during the 2013 Perseids expedition, which produced a significant contribution to the 2013 totals. The number of cameras increased to 37 by end of 2014 adding another 11288 orbits to the CAMS totals. The success of the CAMS BeNeLux network inspired more dedicated amateurs to join the network. Several upgrades in the CAMS software were implemented. Auto CAMS was introduced in 2015. The evolution of the performance of the CAMS BeNeLux network is listed in Table 1 and displayed in Figure 1.

The capacity of the current BeNeLux network yields impressive numbers of orbits at any clear night. The rather unstable weather that characterizes the North West of Europe requires a dense network with sufficient overlap between different stations. The poor weather circumstances still permit the CAMS stations to successfully collect orbits during more than 300 nights per year. The Watec camera’s proved to function very well under intense light pollution and even a Full Moon on a clear night will not affect the results much. When Auto CAMS became available in November 2015, about 10 cameras were permanently guarding the sky, with more and more stations applying Auto-CAMS no unforeseen clear sky is lost and more orbits can be collected. This permanent surveillance of meteor activity enabled the CAMS BeNeLux network to detect every now and then unexpected outbursts or enhanced activity produced by poorly known minor meteor streams. The quick data transmission and efficient reduction procedures allow CAMS BeNeLux to have a relevant dataset of orbits available within 24 hours of time, being often the first camera network to alert the meteor research community when some unusual activity has been spotted.

Figure 1 illustrates the evolution of the network performance. After the first year of its start, the network got sufficient capacity to make good use of all possible clear nights. The growing number of available cameras made it possible to increase the volume of atmosphere under CAMS surveillance. With its current capacity any network wide clear sky results in 100 and more orbits per night which was the initial goal when the CAMS project started in 2010. Perfect clear nights are rare in the low lands of Belgium and the Netherlands; hence most orbits are collected during partial clear nights often by a limited number of CAMS stations having some clear sky. This way the BeNeLux CAMS network already obtained more than 100 orbits for most calendar dates (corresponding to ~1° in solar longitude). During the first 5 years of the network exceptional persistent bad weather appears rather rarely: so far only November 2013, June 2016 and February 2017 had problematic weather circumstances that affected the harvest in orbits very badly. 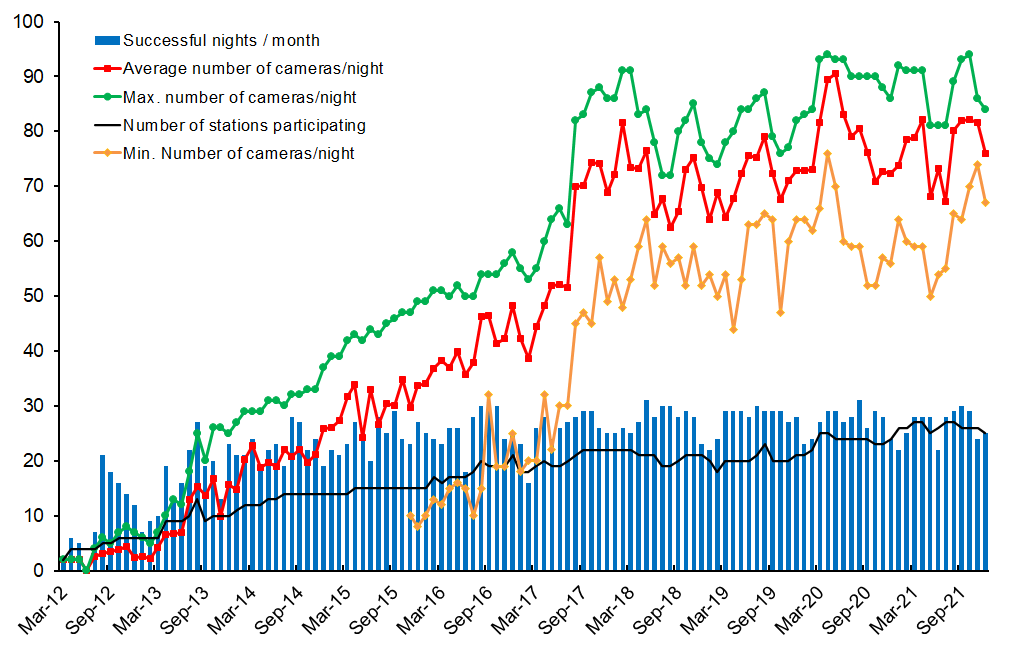 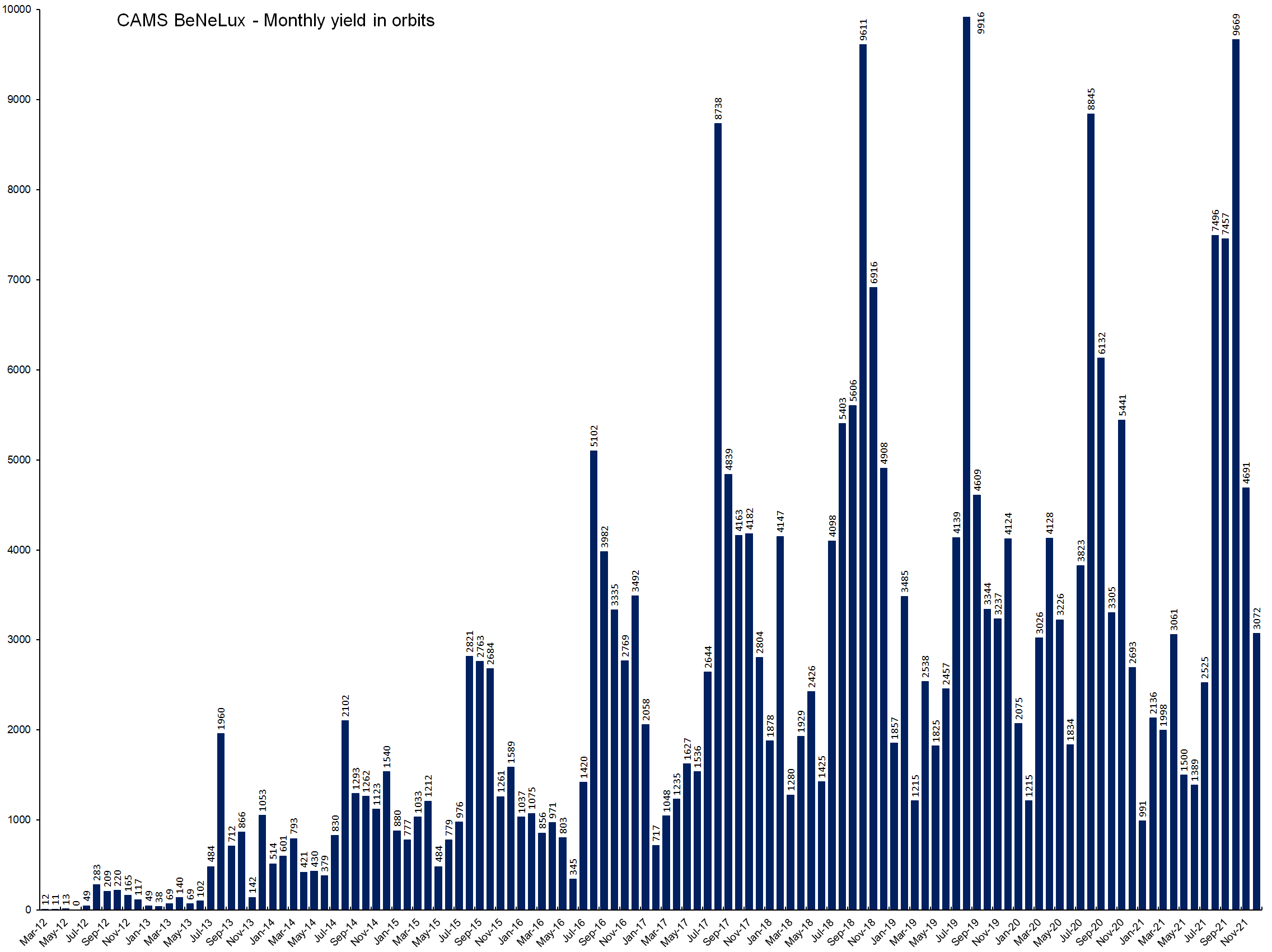 Figure 2 – The total number of orbits collected per month. August 2019 has the record with 9916 orbits in a single month. 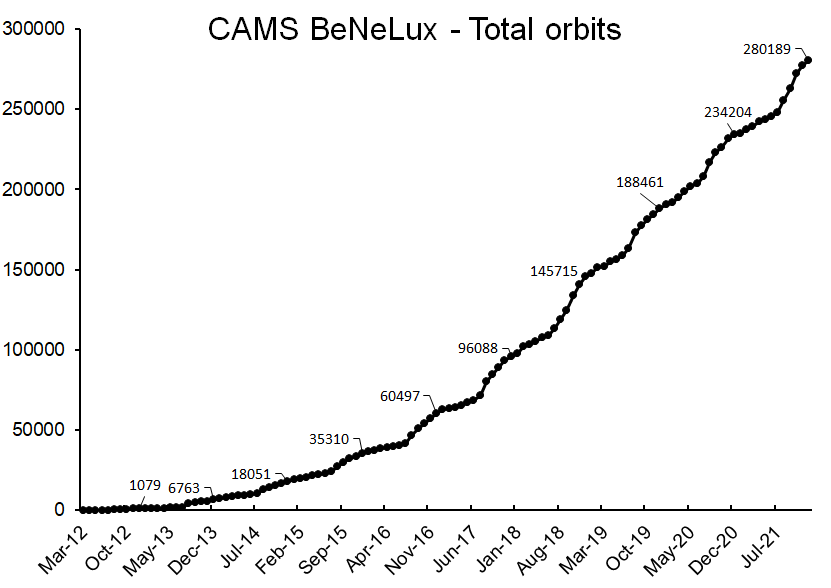 Figure 3 – The evolution of the number of orbits collected by the CAMS BeNeLux network. 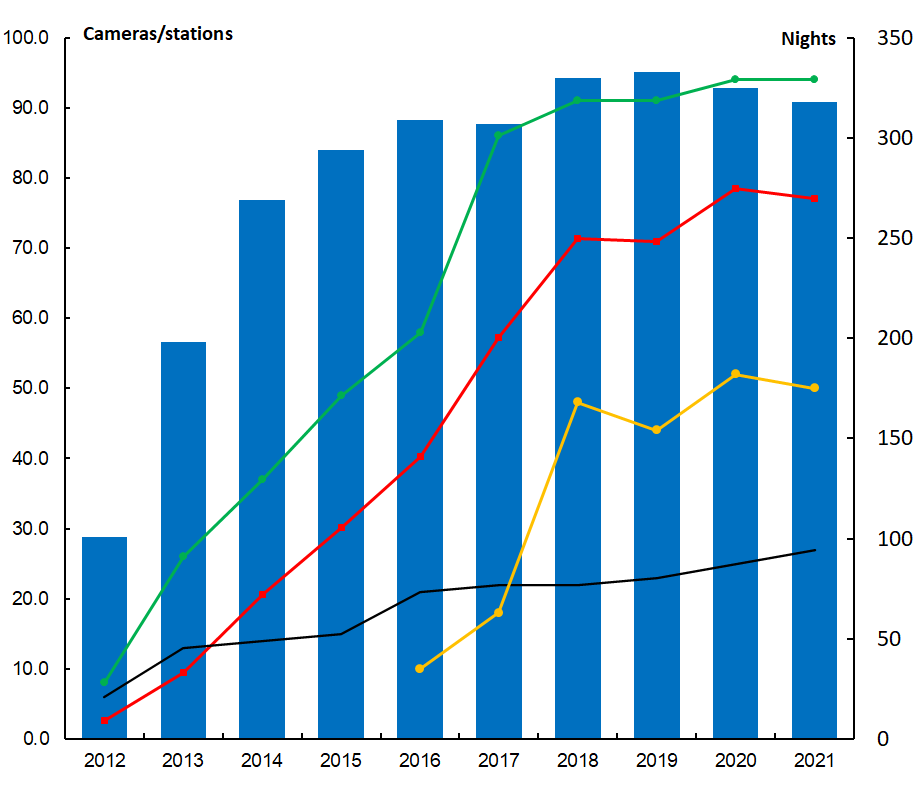 Looking at the day-by-day tally since 2012 the effect of more cameras and more CAMS observing sites is very well visible in the increase in the total number of orbits collected each year.

Already the very first night 14-15 March 2012 with three orbits obtained, this result was considered a great success in a period with no major streams and low meteor activity. The first CAMS stations started to operate more regularly from August 2012 onwards and the results convinced more amateurs to join the network. End of 2012 the 6 first participants had 10 cameras. Each year new participants joined the project and more cameras became available. End 2013 the CAMS BeNeLux network had already 15 calendar dates with more than 100 orbits. Until July 2017 the network had collected more than 100 orbits for 250 calendar dates. How many years will it take to have at least 100 orbits for each calendar day, or for about each degree in solar longitude? The day-by-day tally accumulated since 2012 are displayed below: