4 What equipment do you need?

The Benelux CAMS network is operated by volunteers without any external funding. All participants bought their required equipment at their own expense which may also explain the strong motivation to make good use of the invested budget in the CAMS equipment.

Contrary to most other video networks, the Benelux CAMS network uses the same hardware for all currently operated cameras. This is on purpose to exclude any bias in the data caused by technical artefacts or side effects caused by some mixture of totally different optics, camera’s or frame grabbers. In more recent times experiments with cheaper camera’s yield satisfying results, but also the newest cameras in the network are still identical to the recommended CAMS hardware.

The CAMS are all equipped with Pentax 12mm f/1.2 lenses and have a rather small FOV of about 22° × 30° degrees. Such small FOV yields more accurate astrometry measurements compared to wide angle optics. The Watec 902 H2 Ultimate cameras compensate the number of recorded meteors in such small FOV by the high light sensitivity. The number of meteors that these CAMS register on average is such that statistical significant datasets can be recorded.  The system can function with partial cloudy sky, under a moonlit sky and is still highly effective under severe light polluted skies.

When working with single CAMS it is most important to optimize the intersections of the cameras’ FOV at the meteor producing layers in the upper atmosphere in order to obtain the optimal number of multiple-station meteors.  Another important factor is the geometry station 1 – meteor – station 2. A too short baseline between two CAMS stations provides a too small parallax to enable a sufficient accurate triangulation. A too large baseline on the contrary reduces the probability to record the same meteor from very different distances and produces relative large error margins on the positional measurements of the meteor trajectory. 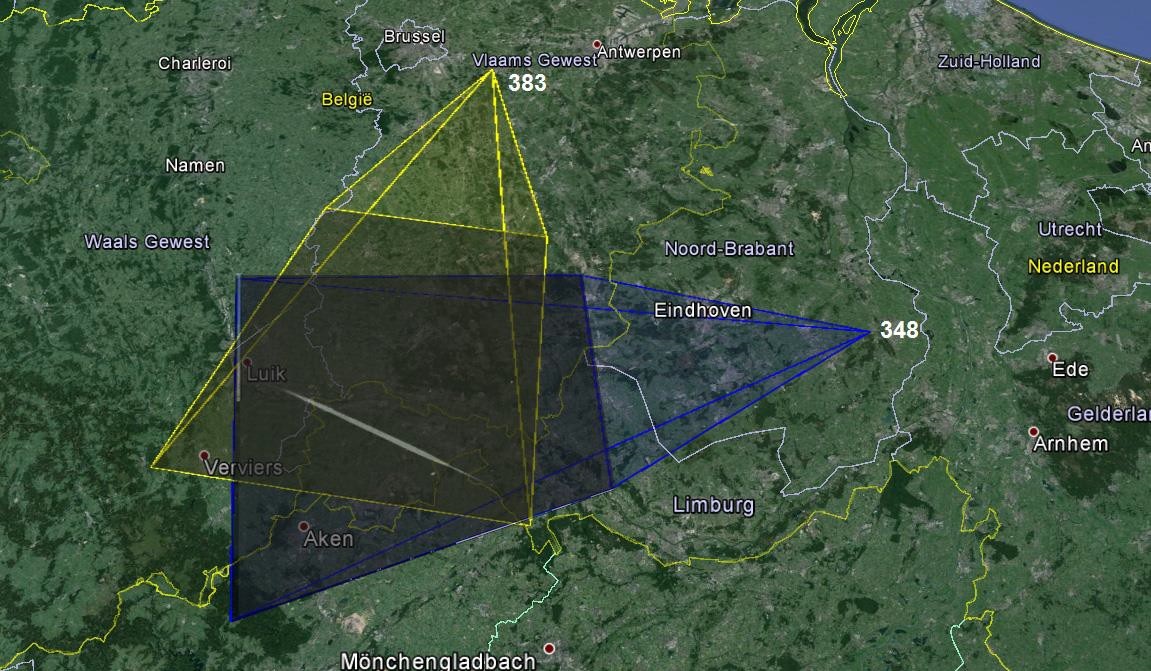 Figure 7 – The projection of camera fields 383 and 348 at 90 km elevation with a meteor trail. The direction of each single camera is chosen in such a way that an optimal volume of the atmosphere between 80 and 120 km elevation is monitored by two or more camera’s. Note that the intersection surface becomes larger for 100 km or higher.

With CAMS video observations we work within the same particle range as the traditional visual observers: from very bright meteors until the faintest +5 meteors. While passing clouds, light pollution or moon interference will force the visual observer to quit, CAMS still produces a lot of results during many nights that are of no use for visual observations. Until now CAMS is not used to determine hourly rates, mass distribution indexes or meteor flux, but it provides highly accurate positions of meteor tracks at the sky, trajectory positions in the atmosphere that allow calibration for radio echo techniques, light curves and last but not least accurate orbital data. To map radiant positions and to track radiant drift, the accuracy of CAMS cannot be achieved by visual plotting work. The fact that the CAMS networks function most of the nights 24/24 and 7/7 worldwide makes it very likely that any unexpected or theoretical predicted outburst can be successfully observed by CAMS which offers an unambiguous meteor stream association based on orbital data.

The only aspect that might discourage amateurs from taking part in this project is the cost of the required equipment. The costs for a single camera for someone who has a suitable PC available require about 600 Euro, which is indeed a significant investment. However a regularly operated camera can capture ~3000 meteors per year of which ~60% will be double station and help to obtain an accurate orbit. After two years, the cost efficiency of this system is less than 10 cent for each meteor and about 20 cents for an orbit, which is much cheaper than what still photography required (cameras and films) and also much less time consuming than the old traditional meteor photography. The current technology caused a revolution in the progress of meteor astronomy. Compared to the extreme expensive Super Schmidt Camera project, which results have determined our knowledge about meteor showers during about 50 years, today’s video technology provides access to amateurs to compete with the legendary Super Schmidt Camera’s and do much better.

For any amateurs seeking some useful kind of activity to make a real personal contribution to science, video meteor observing offers a unique possibility for a reasonable budget. Table 2 summarizes the items necessary for a single camera set-up. Buying second hand material may help you getting started with ~200 Euro for a complete CAMS set up in case you have a suitable PC available. In the most expensive scenario, buying all new equipment may cost ~700 Euro for a single CAMS set up. Most people manage to have a single CAMS ready for ~500 euro per camera. Buying second hand saves money, but the quality of old Watecs proved problematic for some participants.

Table 2 – Required equipment and indicative prices in Euro (according to recent purchases). 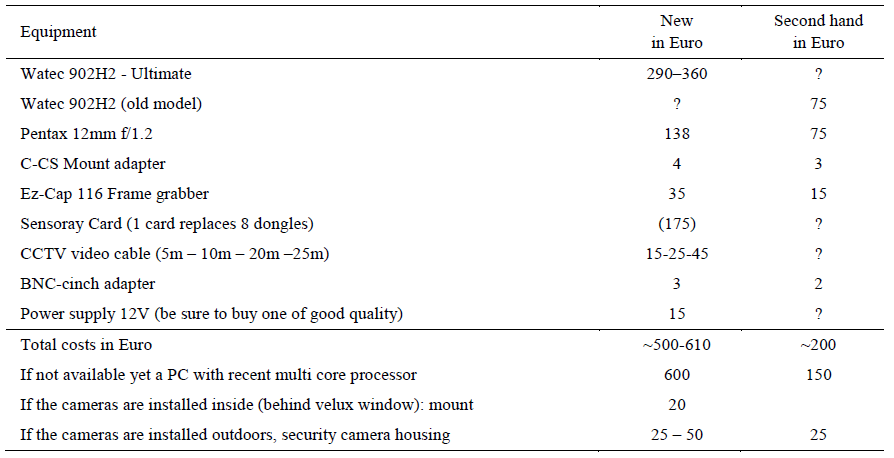 Most participants from Belgium, Germany and the Netherlands ordered all material online. Except for the EzCap Video grabber, the material can be bought from different suppliers, but as far as known the following offers proved to be the best buy as all other suppliers were significant more expensive. If you are new to this we recommend discussing your plans for a purchase with participants who already operate cameras and who may advise on some options. There are many types of Watecs, lenses, cables, plugs, etc. Be sure to order the right items. In case of doubts, check with a CAMS-friend.

So far suppliers in the Netherlands or France proved to be very expensive. Ordering two or more cameras at once will save money on the shipping fees. In principle you can order all items from 4 different companies: Techport24/Modern Astronomy (Watec 902H2Ultimate), vd-shop (lens and adapter), EZCAP (frame grabber) and Conrad (cable, power supply and BNC-adaptor). The existing CAMS stations ordered in general from the following suppliers:

Note the number at the bottom of the Watec: “W134B” which identifies the version for Europe (PAL). Make sure you do order the right Watec version: PAL and 1/2 inch processor!! 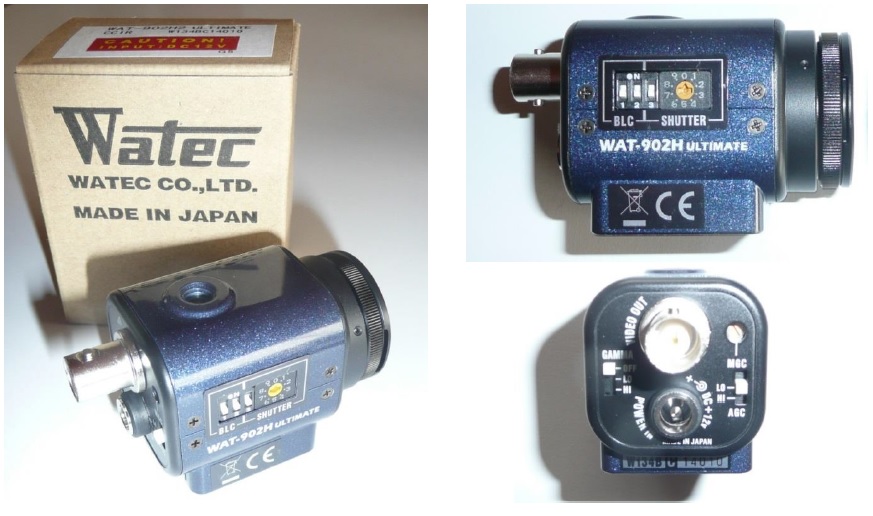 Figure 8 – The Watec H2 Ultimate is the standard recommended camera for CAMS. 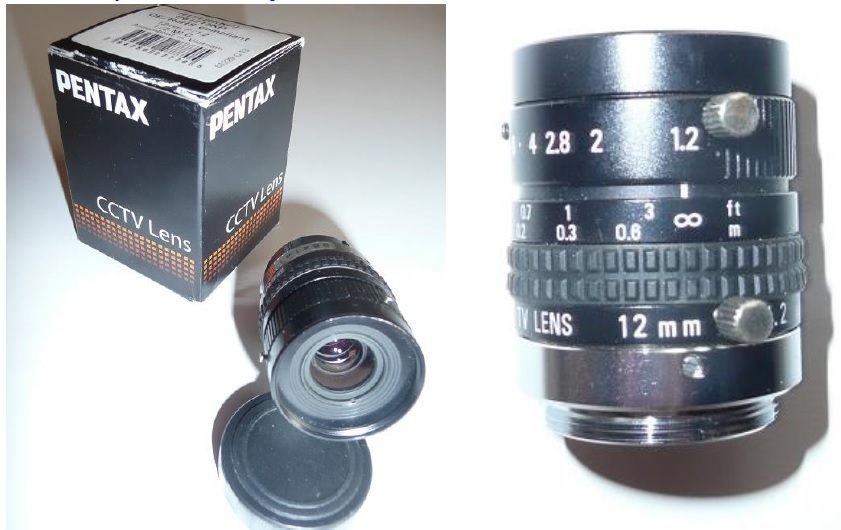 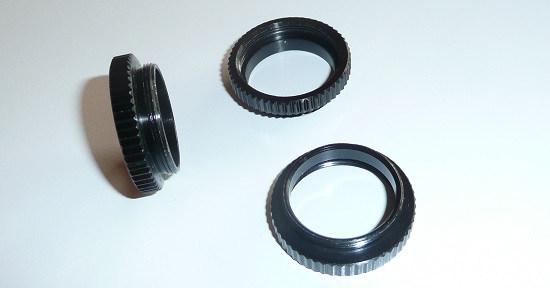 Figure 10 – To focus you need a C-CS Mount adapter ring for CAMS. 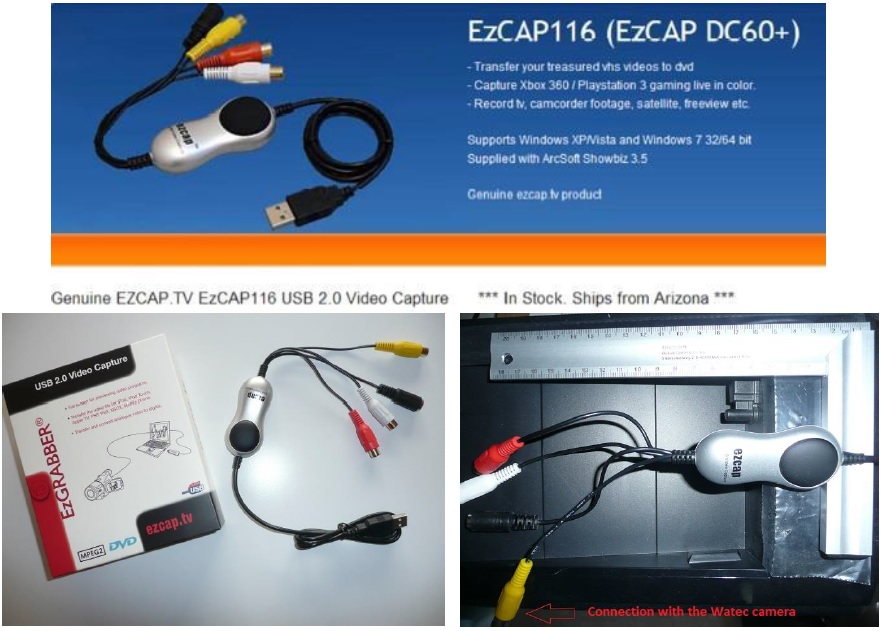 Figure 11 – The EzCap 116 Video Grabber is recommended for CAMS.

Figure 12 – To connect your video cable to your framegrabber you need a cinch-bnc connector.

If you use 4-8 cameras on a single desktop, instead of using 4 to 8 Dongles, consider buying a Sensoray card:

It costs about 200 US $ and the card is delivered with the cables, solving you the problem with lack of USB connections on your PC.

The old version Watec H2 (left) can be found second hand for only 75 Euro. The image and number of meteors recorded with the second hand Watec H2 compares well with the more expensive Ultimates, but the old version tends to have problems with the calibration of the camera field.

Figure 13 – The old model Watec H2 (left) and the ultimate (right). Note the number at the bottom of the Watec: “W134B” which identifies the version for Europe (PAL).