The captured files are located in the folder CapturedFiles. The files with suspected moving objects are located in the folder ArchivedFiles. That is the situation before you begin with CamsGUI.  If this is your first run and you are not familiar or having trouble with manual calibration (FTP_MeteorCal.exe read section 7.2) please practice this before starting CamsGUI.

Start CamsGUI, there are several checks build in in CamsGUI. 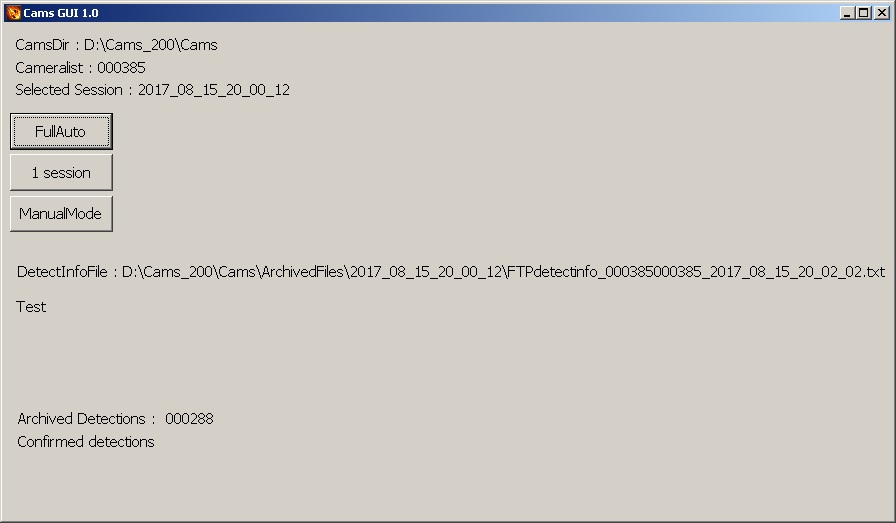 To get started we have 3 buttons:

When you press FullAuto then all not processed sessions located under CapturedFiles will be processed in chronological order. If the calibration was successful at once (executed and applied by LaunchCapture), you will immediately go to the Confirmation screen.  If the calibration was not successful then it will show a message box that asks you if you want weather thumbnails for the uncalibrated camera.

Figure 59 – Message box to prompt the user to ask for thumbnails or not.

Figure 61 – The BMP file with all the thumbnails.

You can take a look at the thumbnails and decide if the calibration was failing because of clouds or any other reason. If you think that the calibration has failed because the camera has been moved. Determine the time with the largest number of stars. In this case the camera has not been moved, it was a cloudy night. The next message box asks if you want to do a NudgeUpdate (see section 7.5).

Figure 64 – Overview of different versions of the calibration files.

If the calibration did not succeed at all then this message box is displayed.

With or without successful calibration we have arrived at the confirmation. 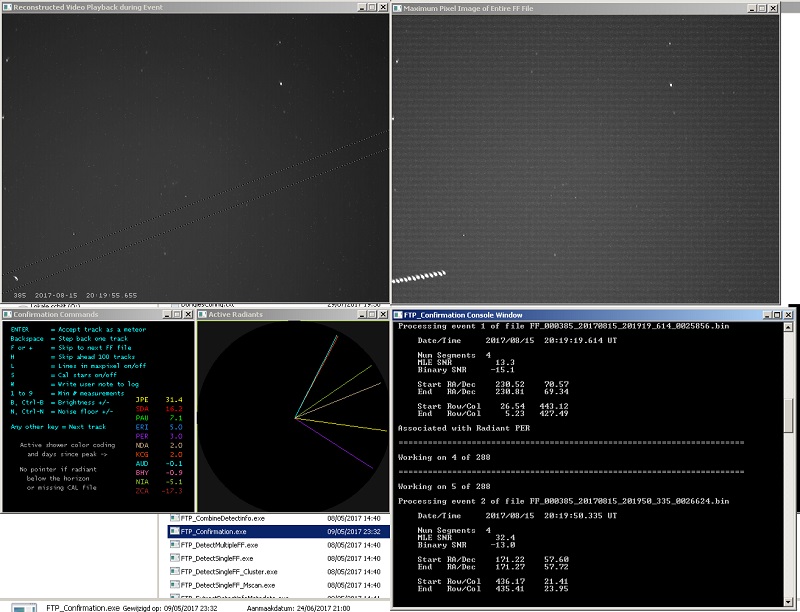 Figure 66 – Screenshot of FTP_Confirmation.exe when running, showing a typical false detection caused by a plane.

Next five windows are opened on your screen:

During confirmation you have the following functions available: 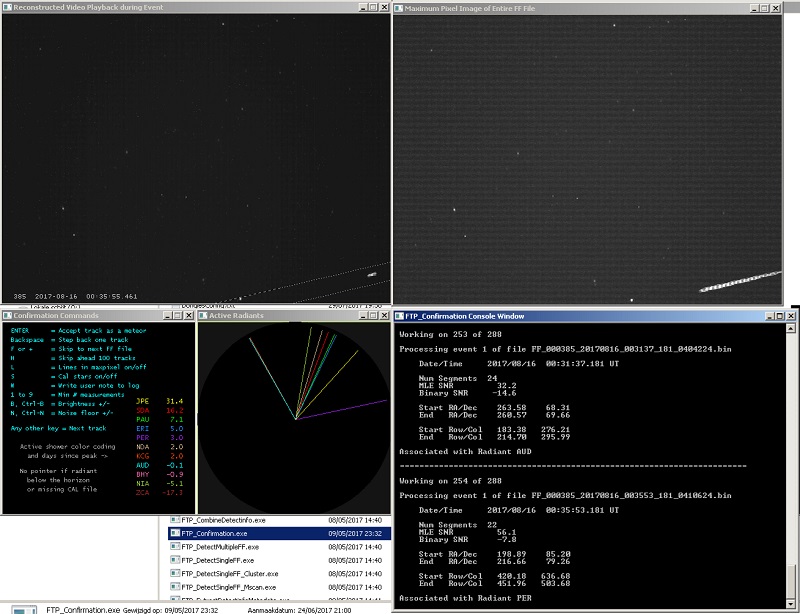 Most detections will prove to be due to planes (especially near airports), clouds, birds or insects. Meteors may be very faint, barely visible on the screen, hence it is strongly recommended to work in a dark room or at least with sufficient contrast on your screen. Small screens of laptops aren’t very suitable for this kind of visual confirmation work. When clouds generated large numbers of detections the F-key may help to proceed faster while looking mainly at the top right window with the stacked image of the entire binfile. 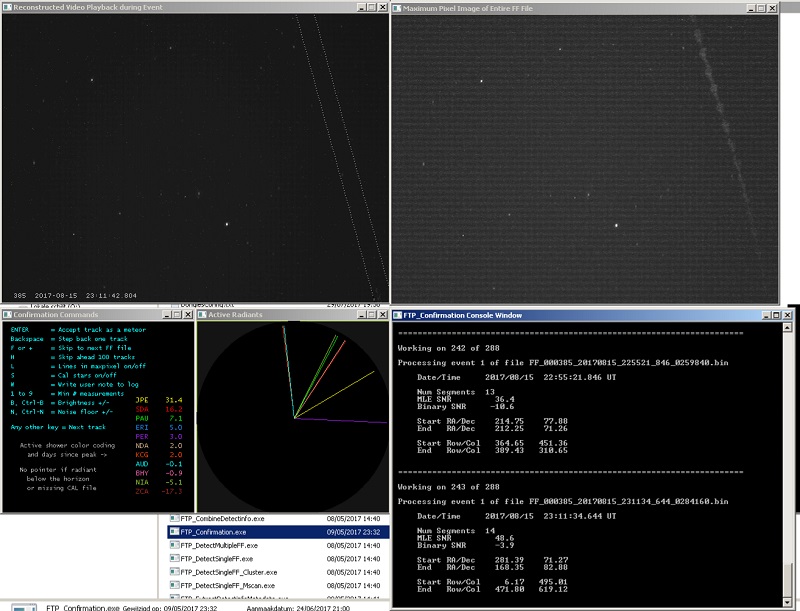 Figure 68 – Screenshot of FTP_Confirmation.exe when running, showing how birds appear to cause false detections.

Planes can be easily distinguished, but birds that reflect some city light may look very similar to a meteor appearance. In case of doubt if the detection looks very likely a meteor, it is recommended to confirm this as a meteor. Later the coincidence procedure on the entire network dataset will match only real meteors for trajectory and orbit calculations.

When all detections have been verified, the confirmed binfiles are copied under the directory ‘C:\CAMS\ConfirmedFiles\yyyy_mm_dd_hh_mm_ss\’ with as final result an infodetectfile with the data for the as meteor confirmed detections. 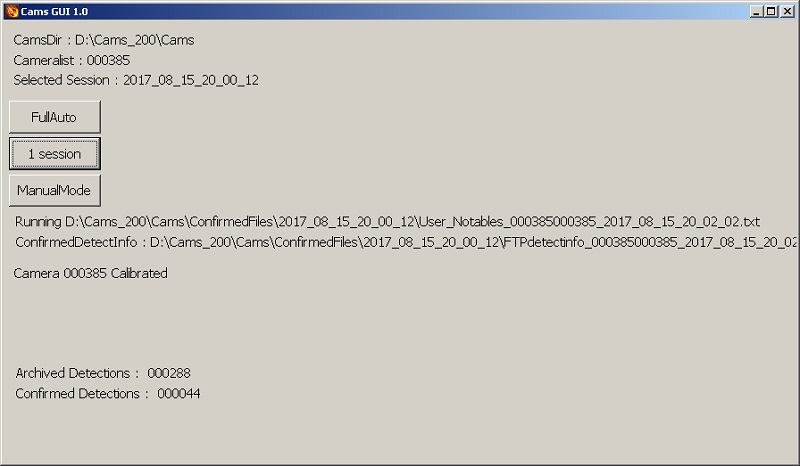 When confirmation is finished the CamsGUI window is updated with the # confirmed detections (see Figure 69).

User_Notables_xxxx is opened now, here you can write some comment about that captured session you want the coordinator to know. This text will be sent by email to the CAMS network coordinator.

Figure 70 – Textbox to enter some free text to be sent to the coordinator. 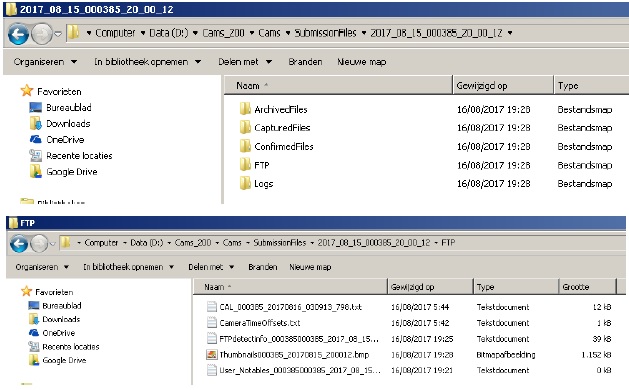 This FTP folder is zipped to the Submittedfolder

Figure 72 – All relevant files are compressed in a single zip file.

Figure 73 – After been successfully transmitted the zip is moved to the Transmitted folder.

When the transfer to the FTP server is successful the zip file is moved to the transmitted folder.

When all this is finished we start again from the beginning with the next session which was not yet processed. If there are no sessions left CamsGUI displays “No sessions available”. 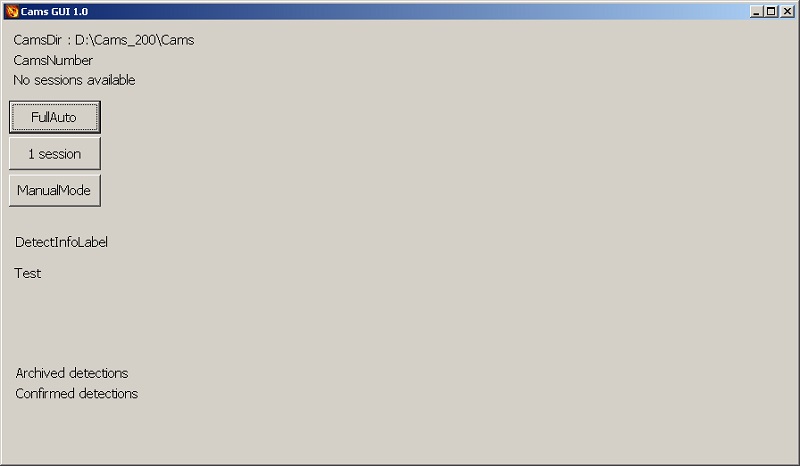 Figure 74 – When all nights have been processed “No sessions available” appears at top left. 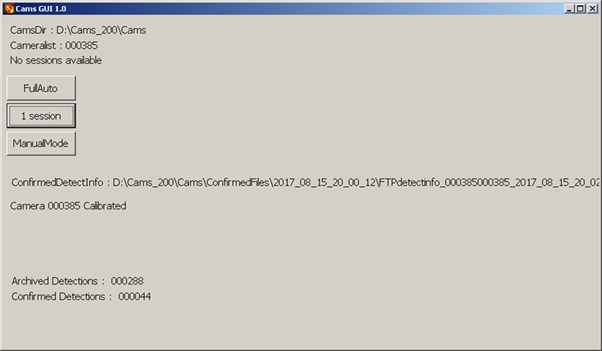 When something went wrong, and you are an experienced user, you can activate manual mode. All checks are disabled in manual mode. 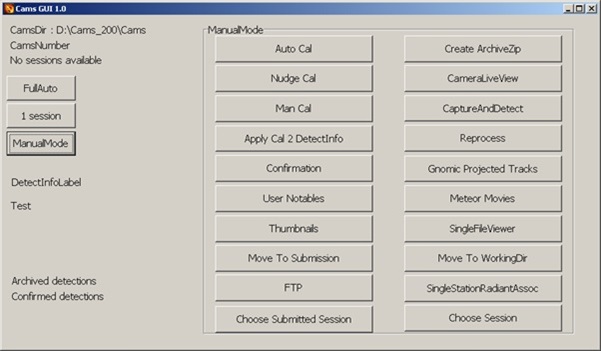 When you click on manual mode there are additional buttons visible.

I think if you know Pete Gural’s programs you know what most of the buttons do. If you don’t know what they do I advise you to look them up in the sections mentioned with each routine for a detailed explanation.

We still have some buttons left:

“Choose Submitted Session”: choose a session that is already processed, this opens a dropdown box (see Figure 77). Hit ok, when you selected the session you want.

After that you’ll probably want the session to be put back in the “working dirs.” (the capturedFiles/ArchivedFiles/ConfirmedFiles directly in the cams folder). You can do this by clicking “Move to working dir”.

“Choose session” works like “Choose Submitted Session” except that you can choose a working dir session.

“Move to Submission” moves the working dir files to the Submission folder. The FTP folder and the logs are also created/moved.

“FTP” uploads the FTP folder to the FTP server, using the folders submitted and transmitted.

“Create ArchiveZip” creates a zip file on a given location, and erases the files in the Submission folder.