R suite for analysis of the EDMOND database

Introduction
R is a language and environment for statistical computing and graphics. It is a GNU project which is similar to the S language and environment which was developed at Bell Laboratories (formerly AT&T, now Lucent Technologies) by John Chambers and colleagues. R provides a wide variety of statistical (linear and nonlinear modelling, classical statistical tests, time-series analysis, classification, clustering, …) and graphical techniques, and is highly extensible. One of R’s strengths is the ease with which well-designed publication-quality plots can be produced, including mathematical symbols and formulae where needed. Great care has been taken over the defaults for the minor design choices in graphics, but the user retains full control. R is available as Free Software under the terms of the Free Software Foundation’s GNU General Public License in source code form. It compiles and runs on a wide variety of UNIX platforms and similar systems (including FreeBSD and Linux), Windows and MacOS.

Library of scripts for analysis
For the purpose of reduction and statistical analysis of the meteor database were developed amounts of scripts (Campbell-Burns et al., 2016) which use R language. Scripts allow the creation of statistical outputs in the form of graphs, such as tables. These outputs can be created for a global database (national, worldwide) and also for the individual stations. Huge benefit is a significant reduction in the time required for the creating of these outputs. Statistical analysis of the entire EDMOND database (Kornoš et al., 2014a) was performed globally as well as for the selected well-known (or very active) meteor showers (Table 1).

Description of the EDMOND database
The European viDeo Meteor Observation Network (EDMONd) has been established only recently (Kornoš et al., 2014a,b). The network originates from spontaneous cooperation between observers in several parts of Europe. The EDMONd Network has been enlarged in recent years and at present consists of observers from 14 national networks and in the EDMOND database is implemented whole IMO VMN database which uses the MetRec detection software (Molau, 1999). Nowadays, due to the international cooperation, meteor activity is monitored over almost the entire Europe. Consequently, in recent years, multi-national networks of video meteor observers have contributed many new data. As a result, the latest version of EDMOND database (v5.03, April 2016) contains 3 833 098 single meteors and 252 425 orbits (Figure 1) collected from 2001 to 2015 (http://www.daa.fmph.uniba.sk/edmond). 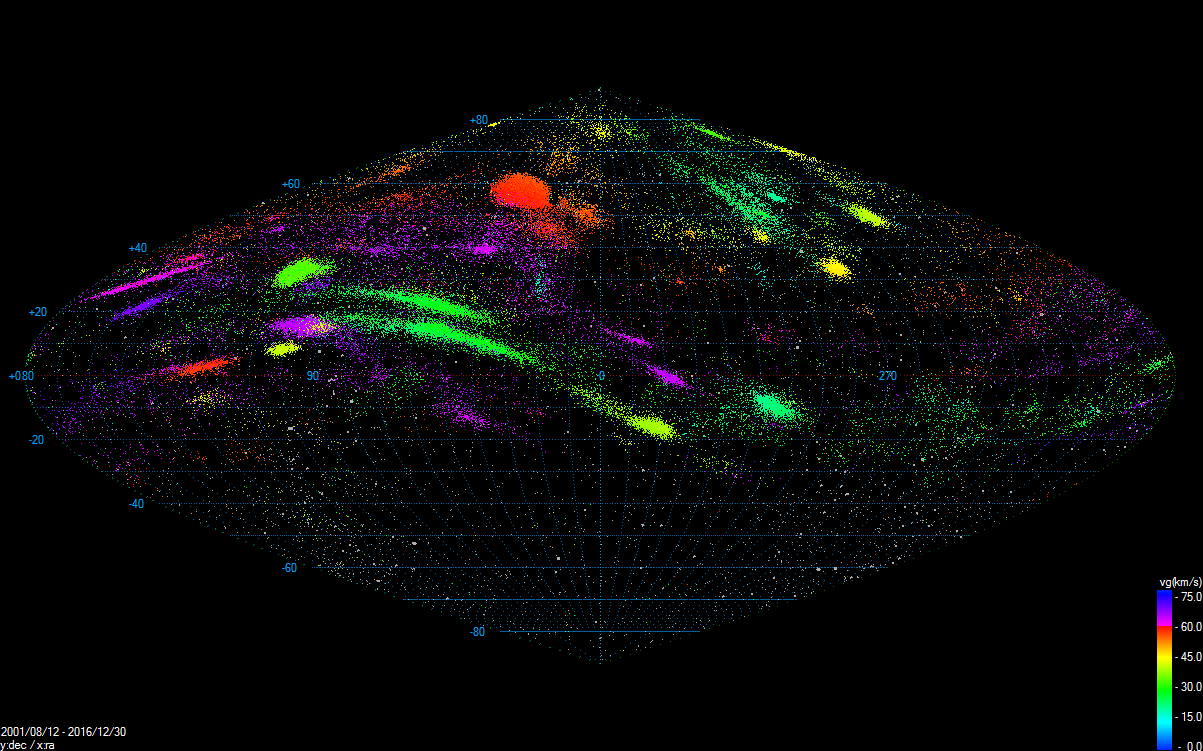 Figure 1: Radiants of all multi-station meteors belonging to the known meteor showers between years 2001 and 2015. Hammer projection in equatorial coordinates is used. Author: Jakub Koukal 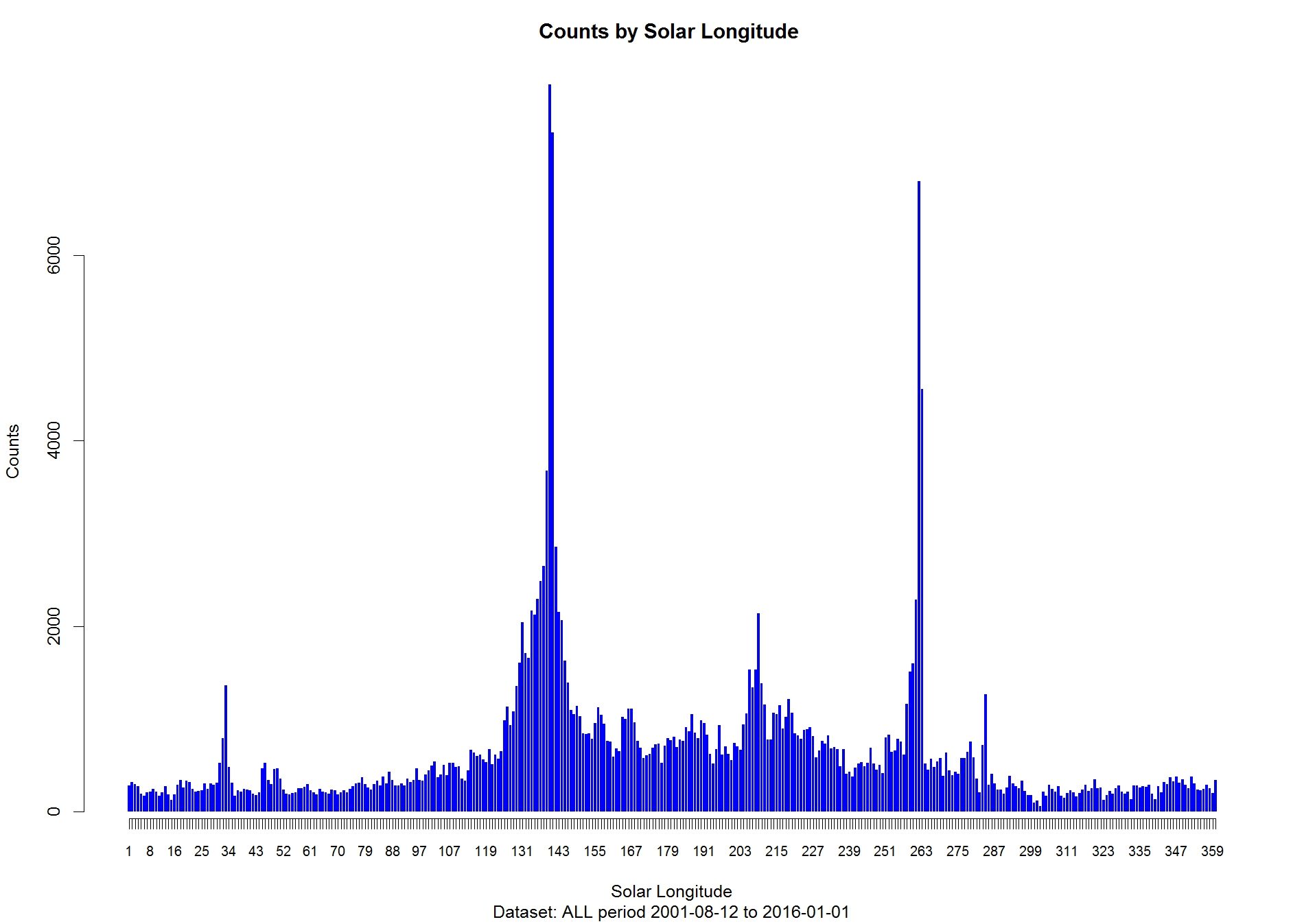 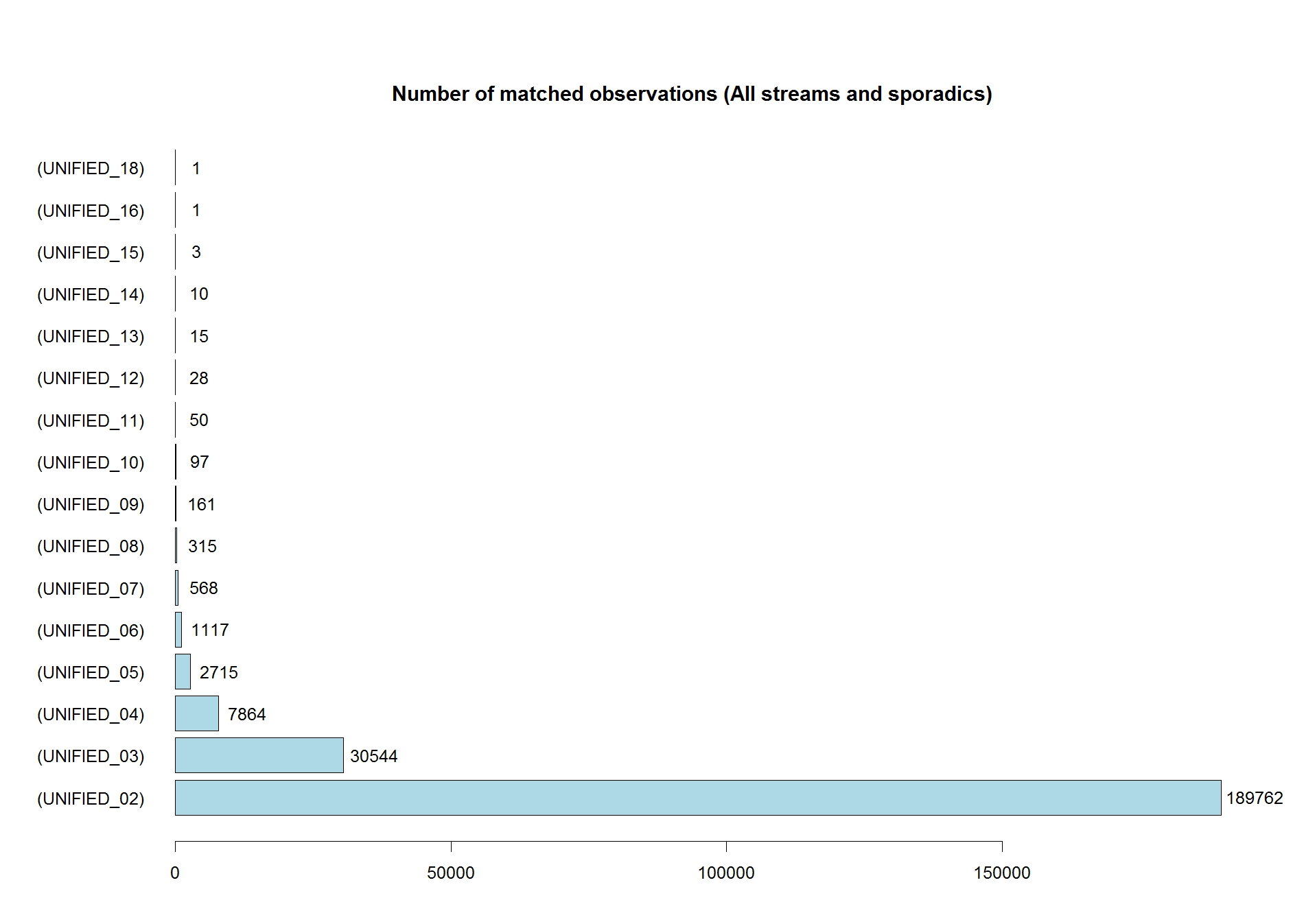 Figure 3: Graph of the stations number per one multi-station orbit. Author: Jakub Koukal

The statistical analysis from the subgroup of scripts called „magnitude“ is focused on the statistical analysis of recorded meteors absolute magnitude. Graph of the bolides number (amag less than or equal to -4) in the individual months during the year (Figure 4) shows the highest number of bolides in August. This is related to the Perseids swarm activity and activity of other meteor showers with high indicence of the bolides (α Capricornids/CAP, κ Cygnids/KCG, etc.). The other months with a high incidence of the bolides are October (Draconids/DRA), November (Leonids, Taurids) and December (Geminids). Graph of bolides divided into individual meteor showers (Figure 5) shows the contribution of individual meteors showers (and sporadic meteors) to the total number of observed bolides. The highest number of the bolides is in sporadic background, because sporadic meteors make up the bulk of observed orbits. The most of bolides within the meteor showers is produced by the following swarms: Perseids, southern Taurids (STA), Leonids, Geminids, Orionids, northern Taurids (NTA), Comae Berenicids (COM), Quadrantids and κ Cygnids. The histogram of absolute magnitude distribution (Figure 6) shows the overall layout of absolute magnitude of observed meteors (including sporadic background). 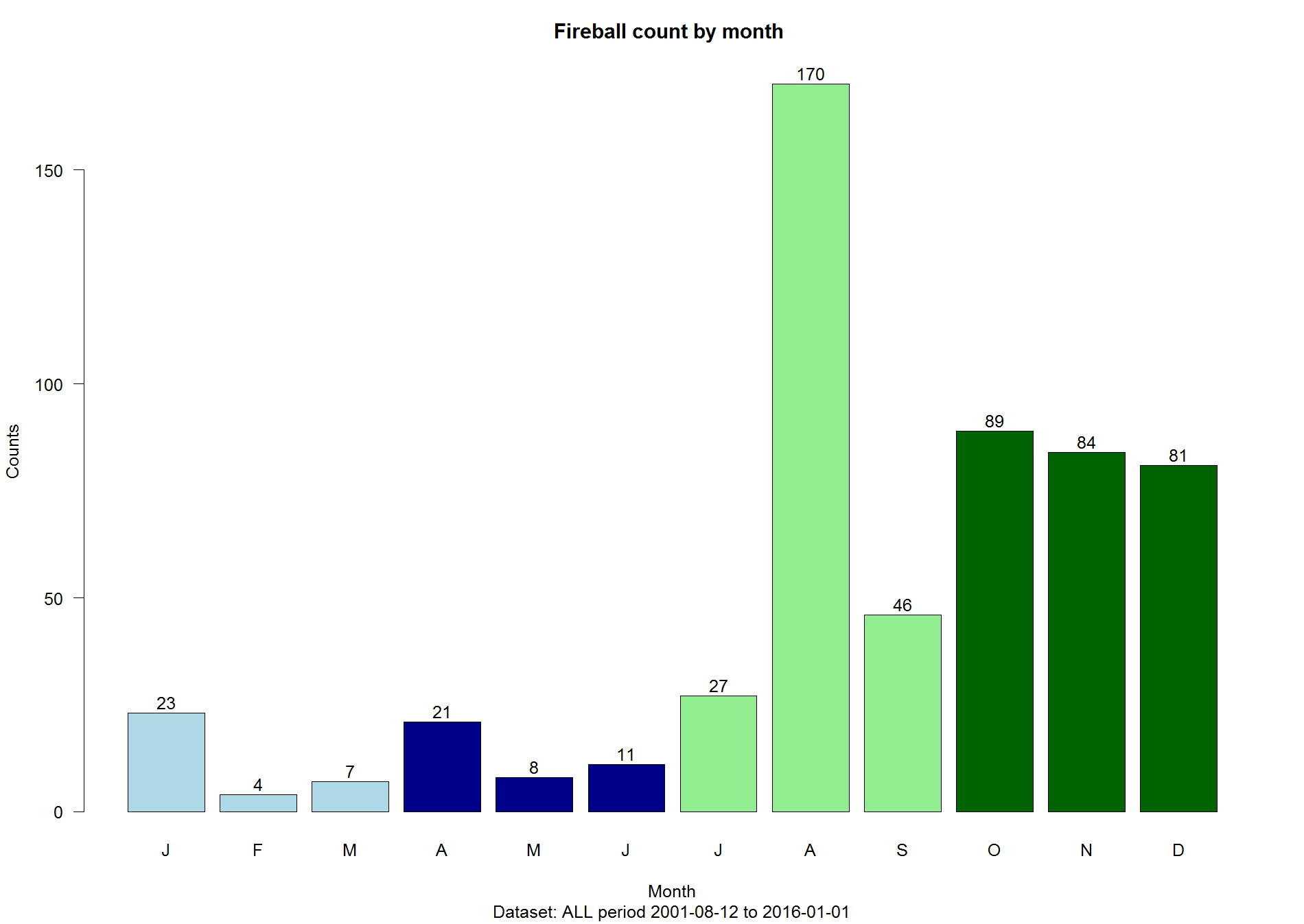 Figure 4: Count of stream meteors with magnitudes less than or equal to -4 (all streams). Author: Jakub Koukal 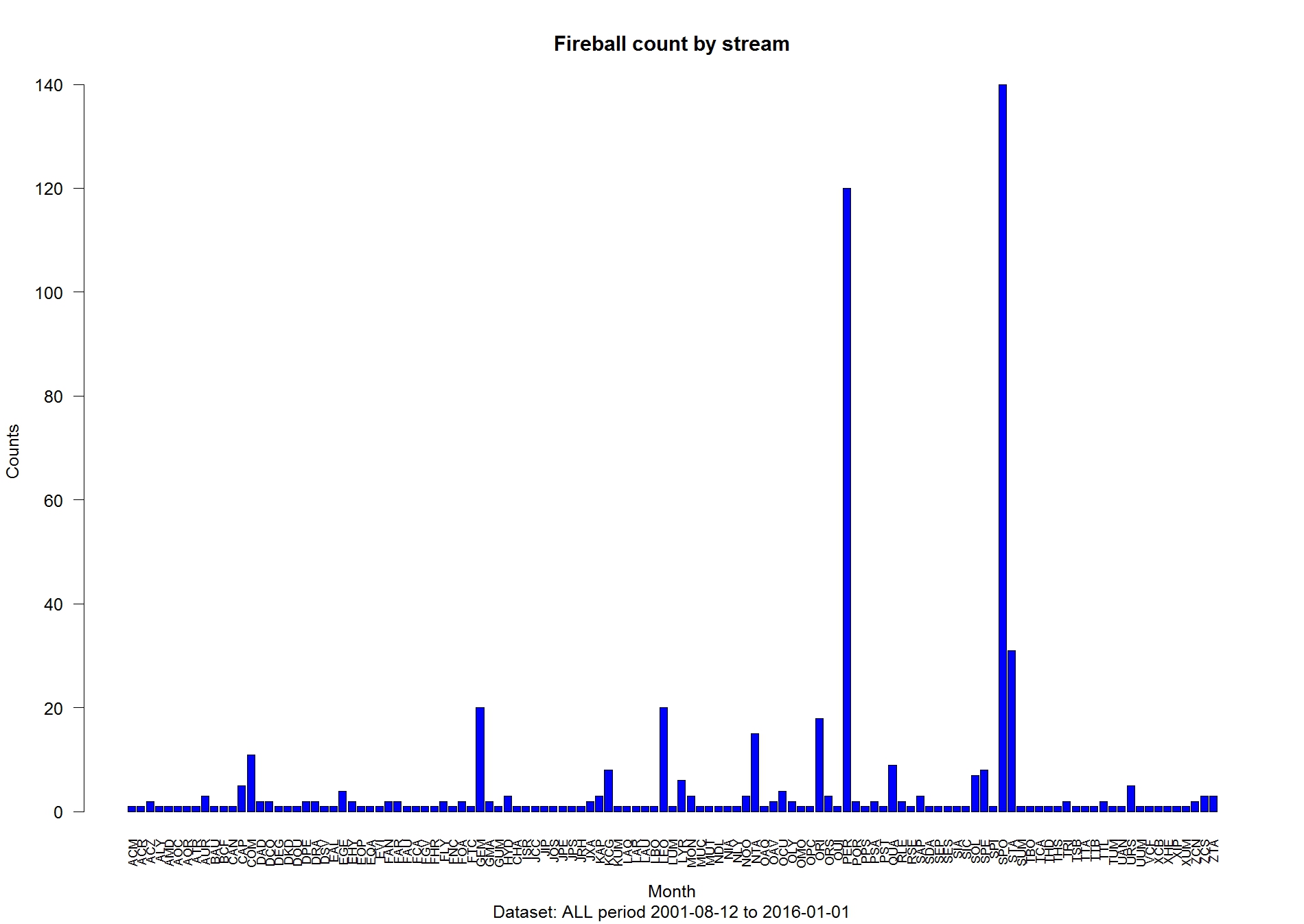 Figure 5: Count of meteors with magnitudes less than or equal to -4 (by stream). Author: Jakub Koukal 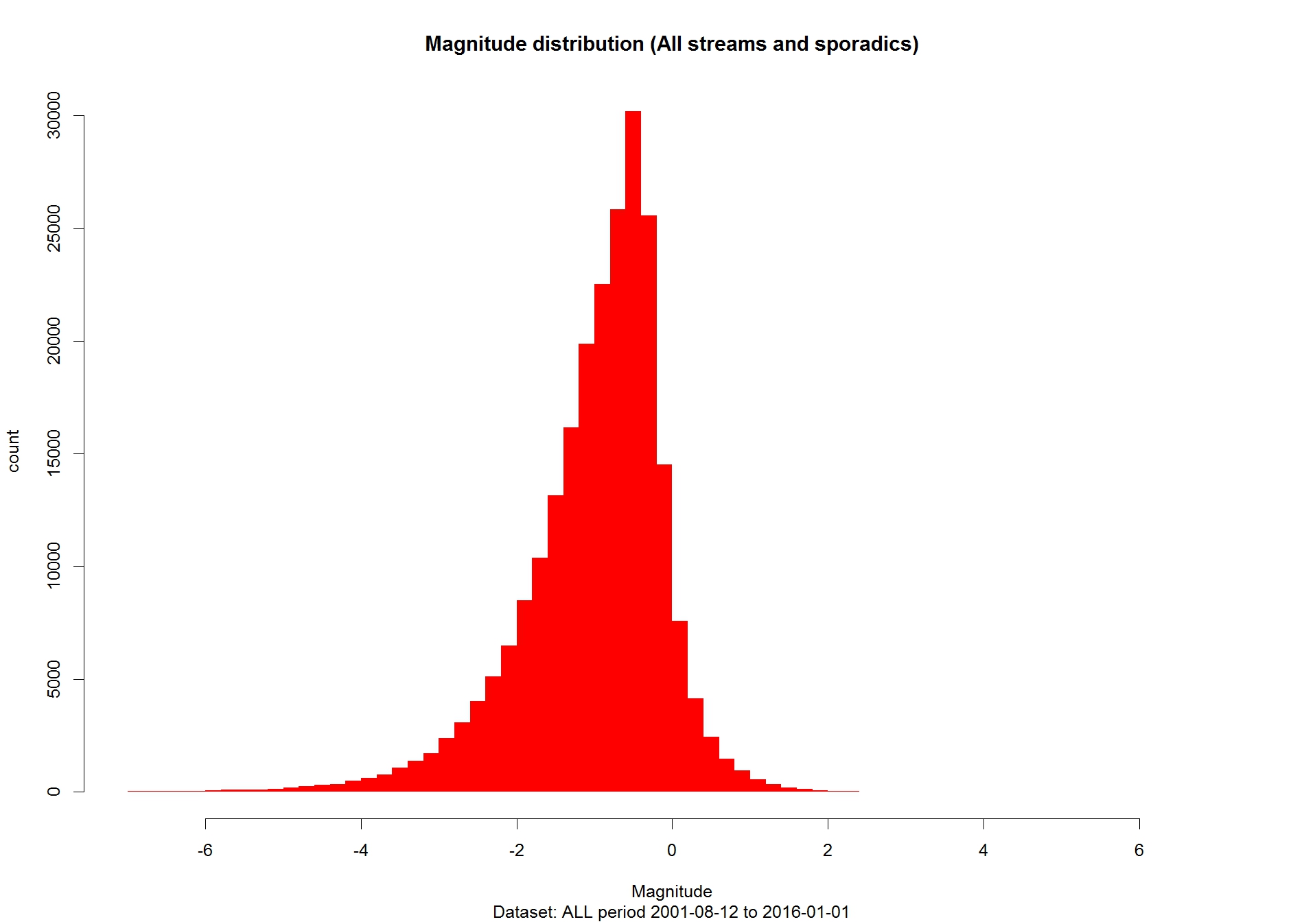 The statistical analysis from the subgroup of scripts called „orbital“ is focused on the analysis of the orbital elements of observed meteor orbits. The histogram of the semi-major axis distribution (Figure 7) shows that the major part of observed meteors has semi-major axis in the range of 1 to 6 AU. Significant peaks are in the range of 1.2 to 1.4 AU (e.g. Geminids) and also in the range of 2.0 to 2.4 AU (e.g. Taurids). In this range also orbits of meteors coming from the Antihelion source (meteor showers and sporadic background) with parent bodies in the main asteroid belt or in the Jupiter´s family comets. The graph of length of observed meteor trajectory in the Earth´s atmosphere (Figure 8) shows that typically is length of the trajectory between 10 and 20 km. The dependence of semi-major axis on length of the ascending node (Figure 9) shows mainly meteor showers with the long-period parent bodies. Clearly visible are especially Perseids, Lyrids, η Aquarids (ETA), Orionids, etc. The dependence of inclination on the semi-major axis (Figure 10) again shows long-period meteor showers clearly, e.g. Perseids, Lyrids, η Aquarids, Orionids, etc. 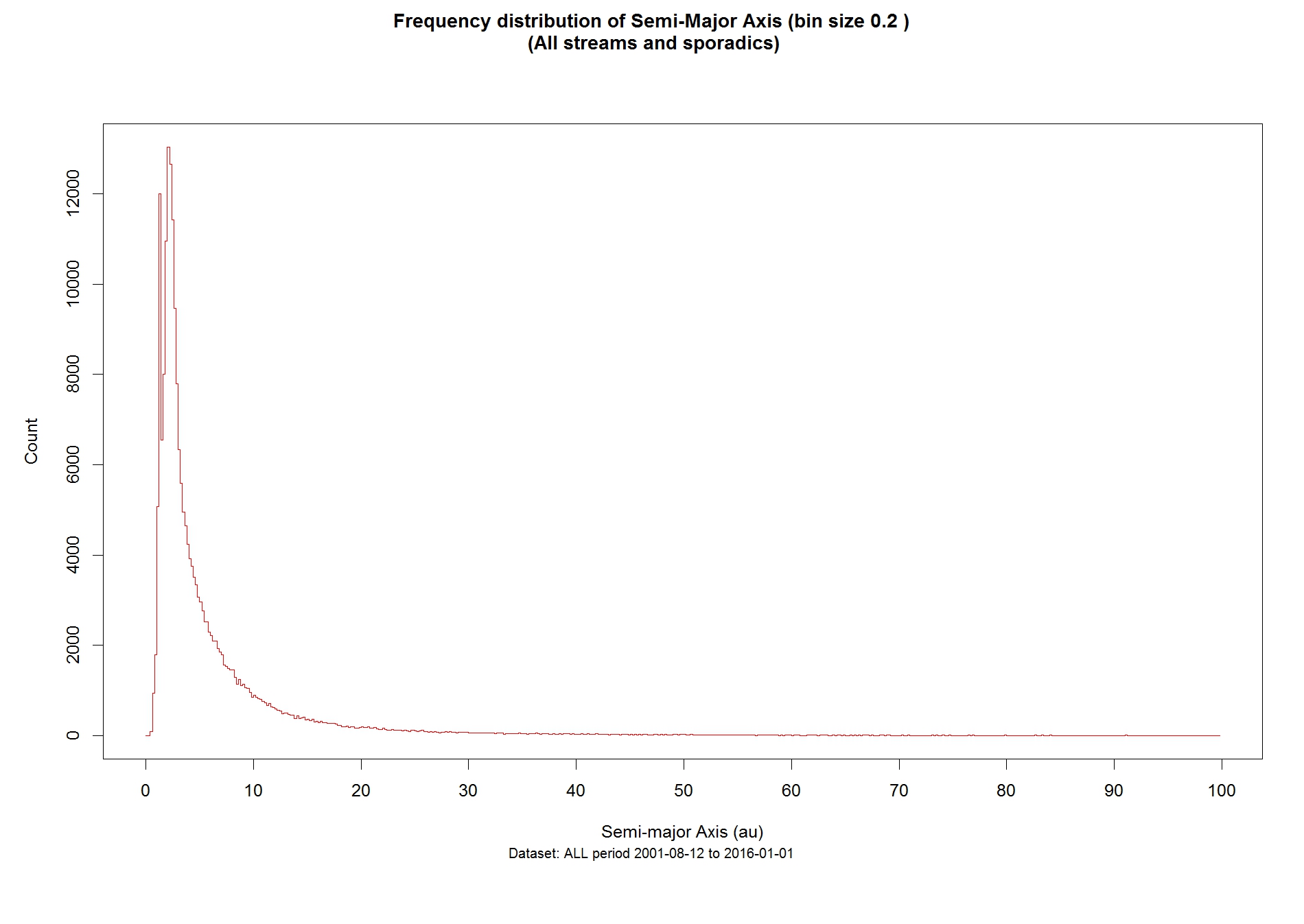 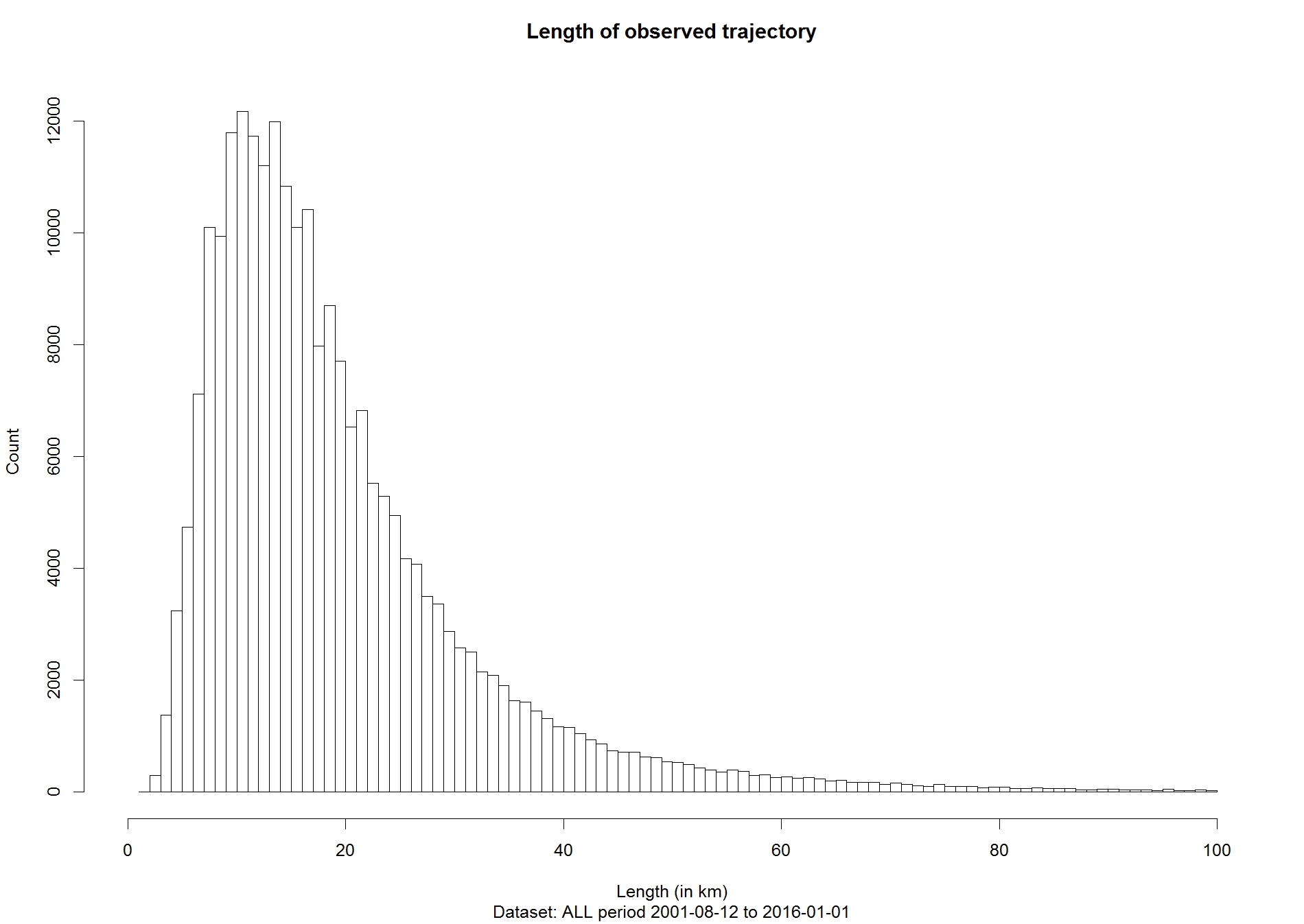 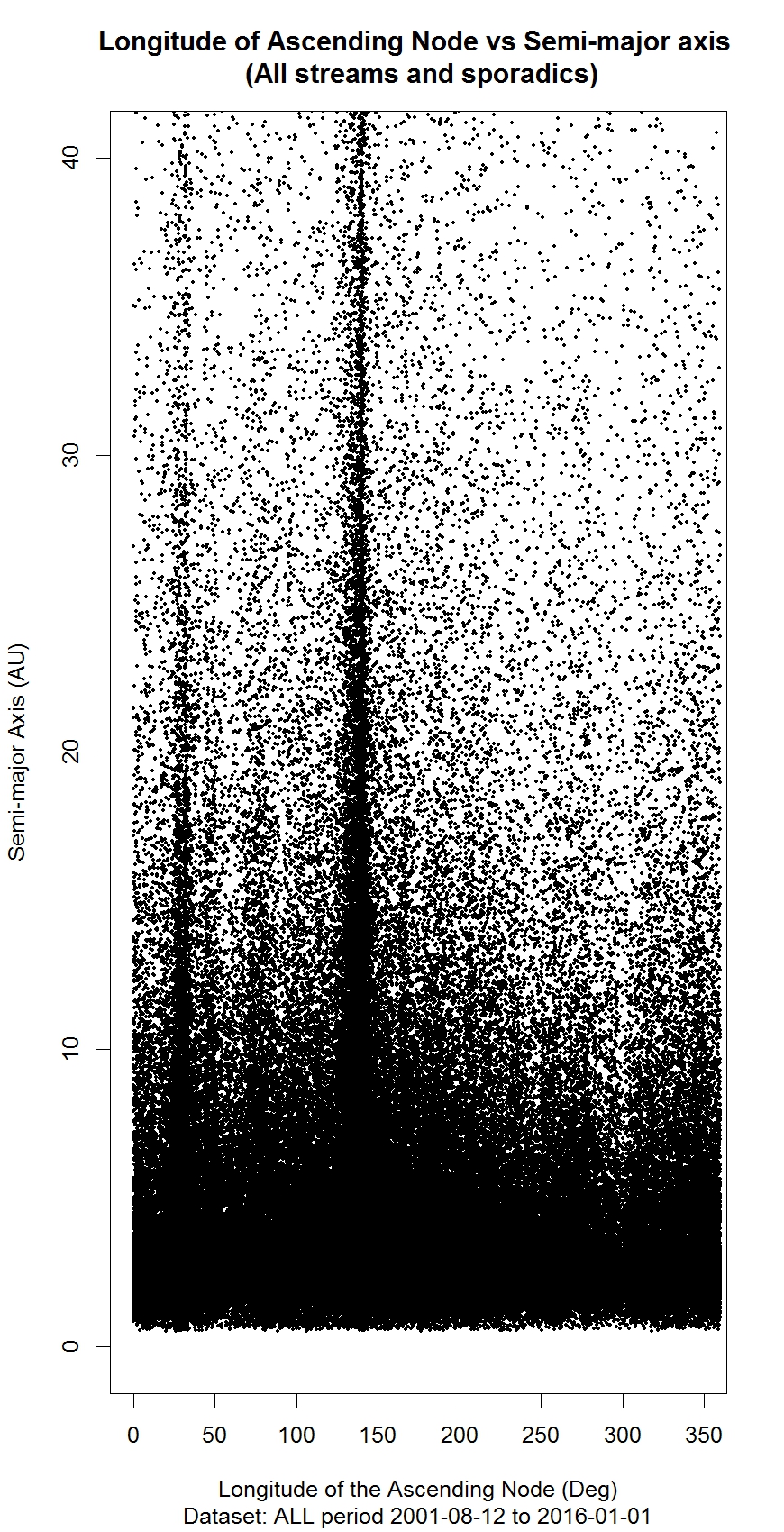 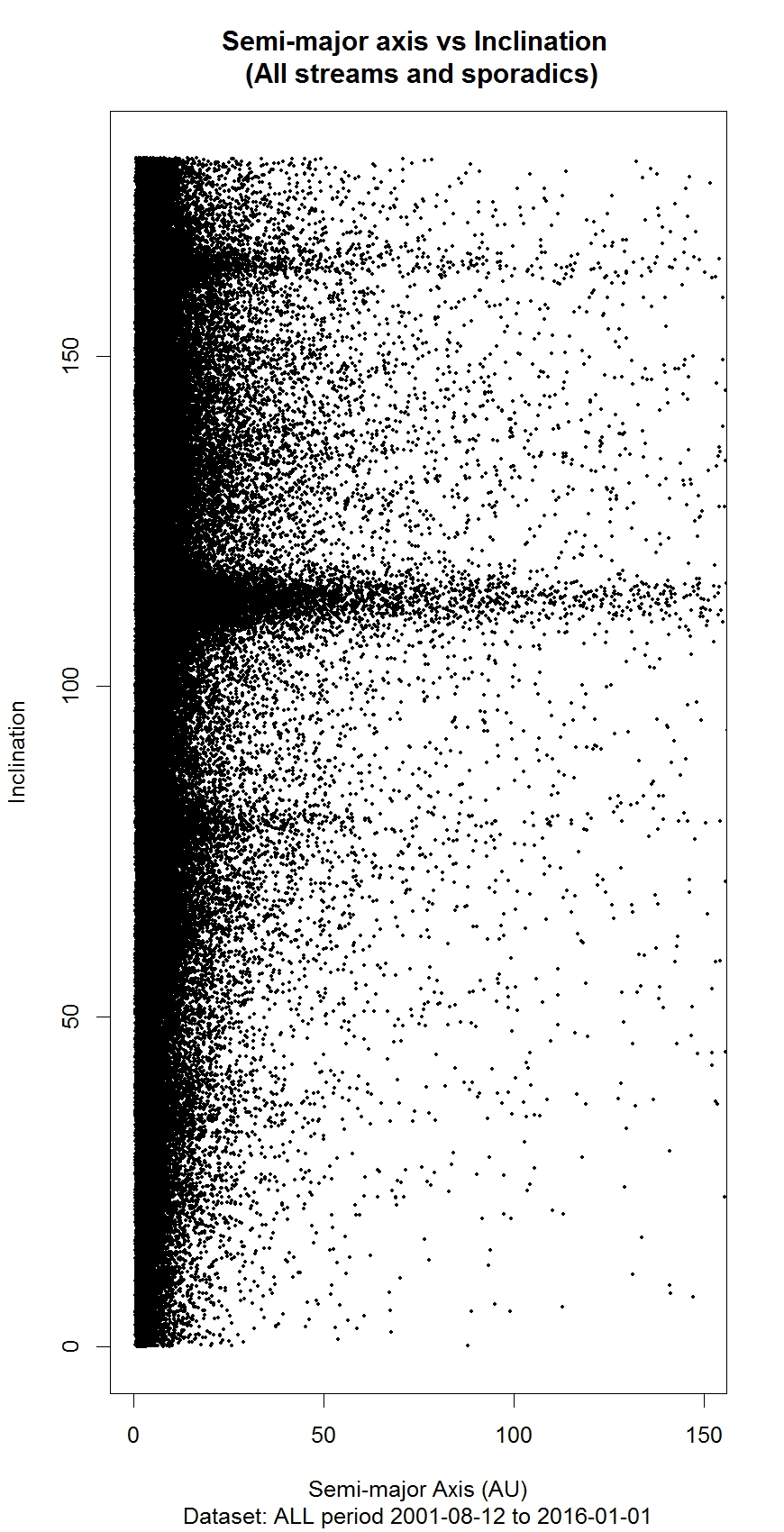 The statistical analysis from the subgroup of scripts called „velocity“ shows the histogram of heliocentric (Figure 11) and geocentric (Figure 12) velocity of meteors in the EDMOND database, including sporadic background. Histogram of the heliocentric velocity shows all hyperbolic orbits (vh is higher than 42.14 km/s) and could show orbits of the interstellar meteors (vh is higher than 46.6 km/s). In fact, the hyperbolic orbits are only product of the measurement errors of the individual orbits. Some meteor showers (e.g. Perseids) have the heliocentric velocity very close to the hyperbolic limit. 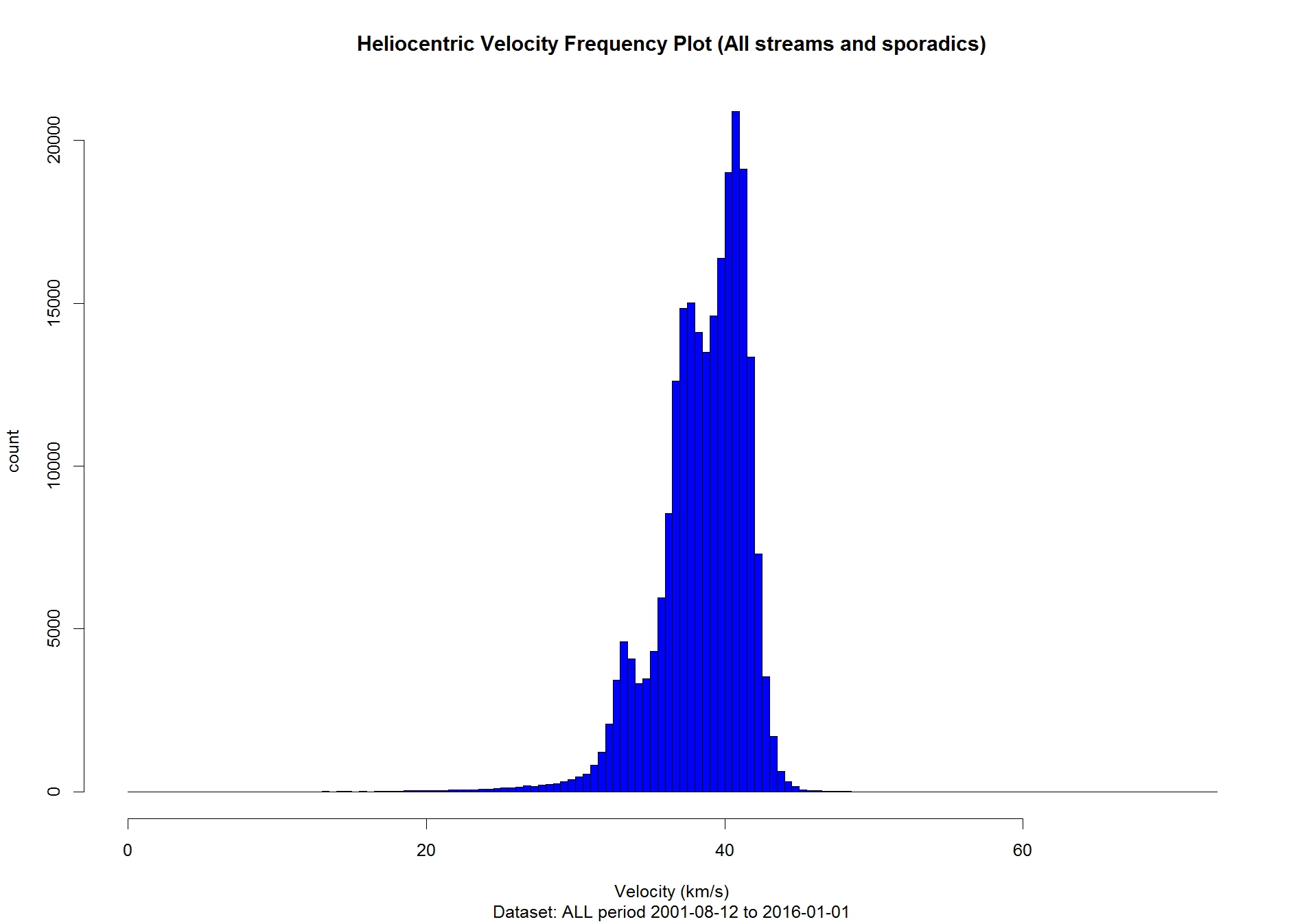 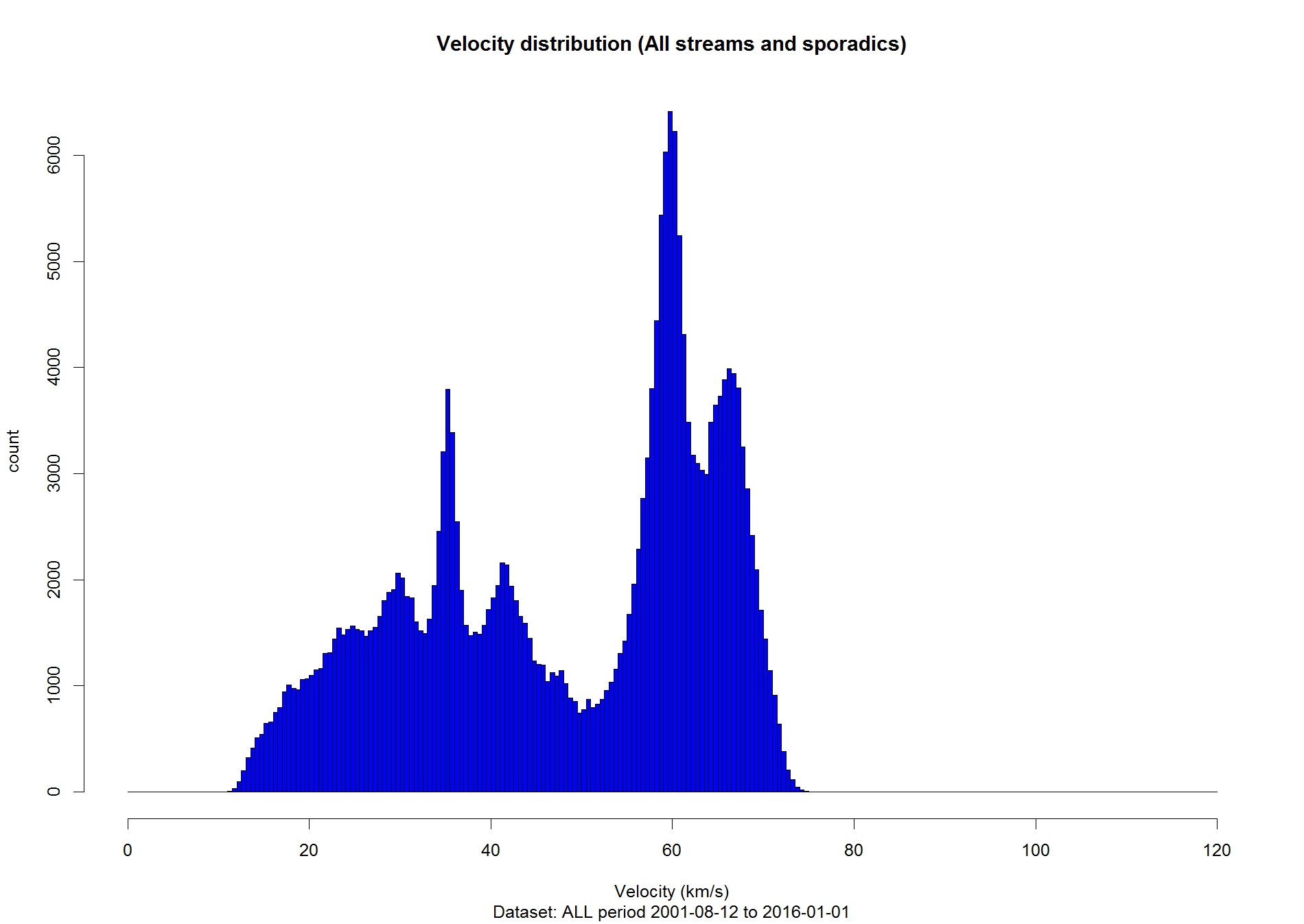 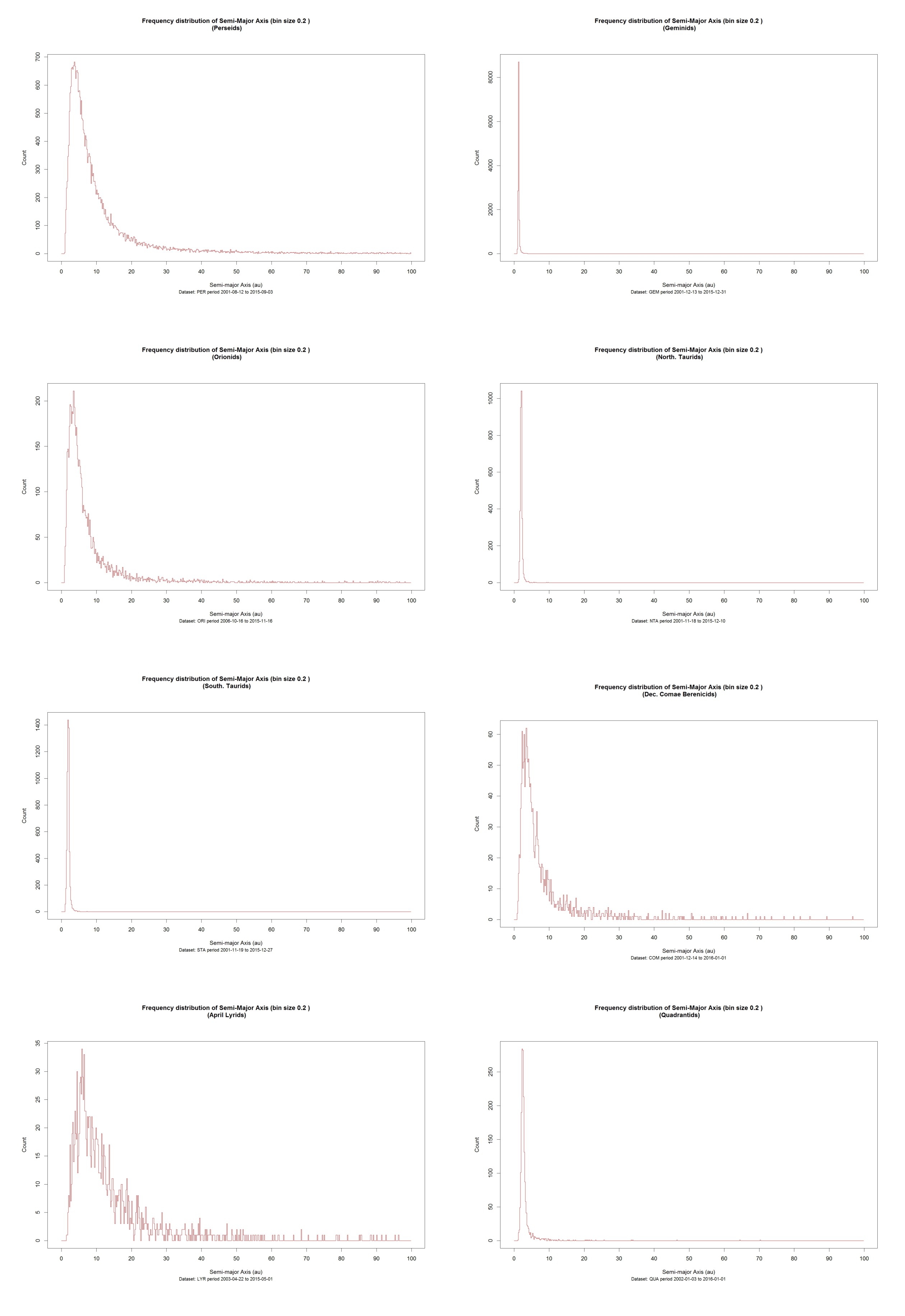 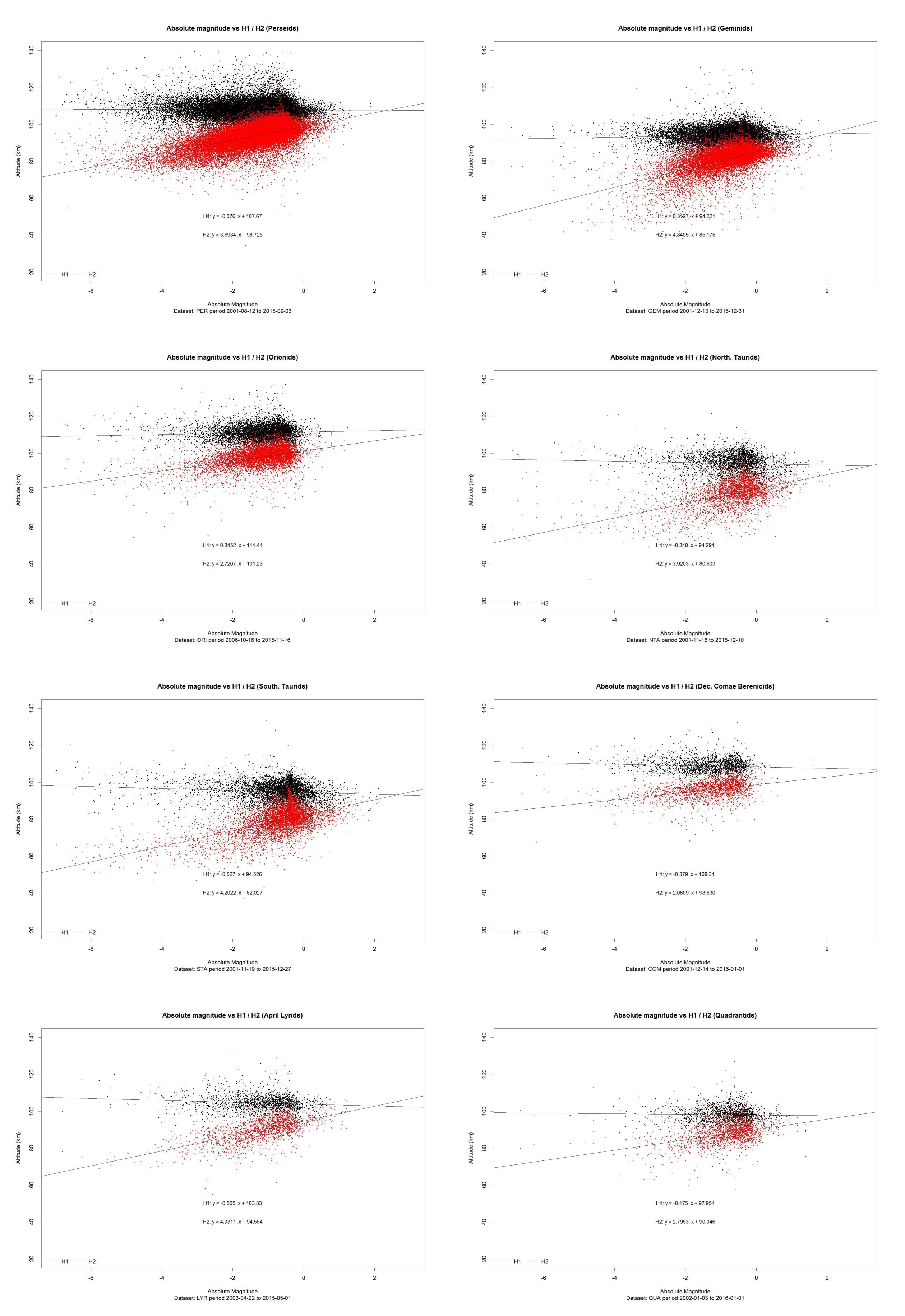 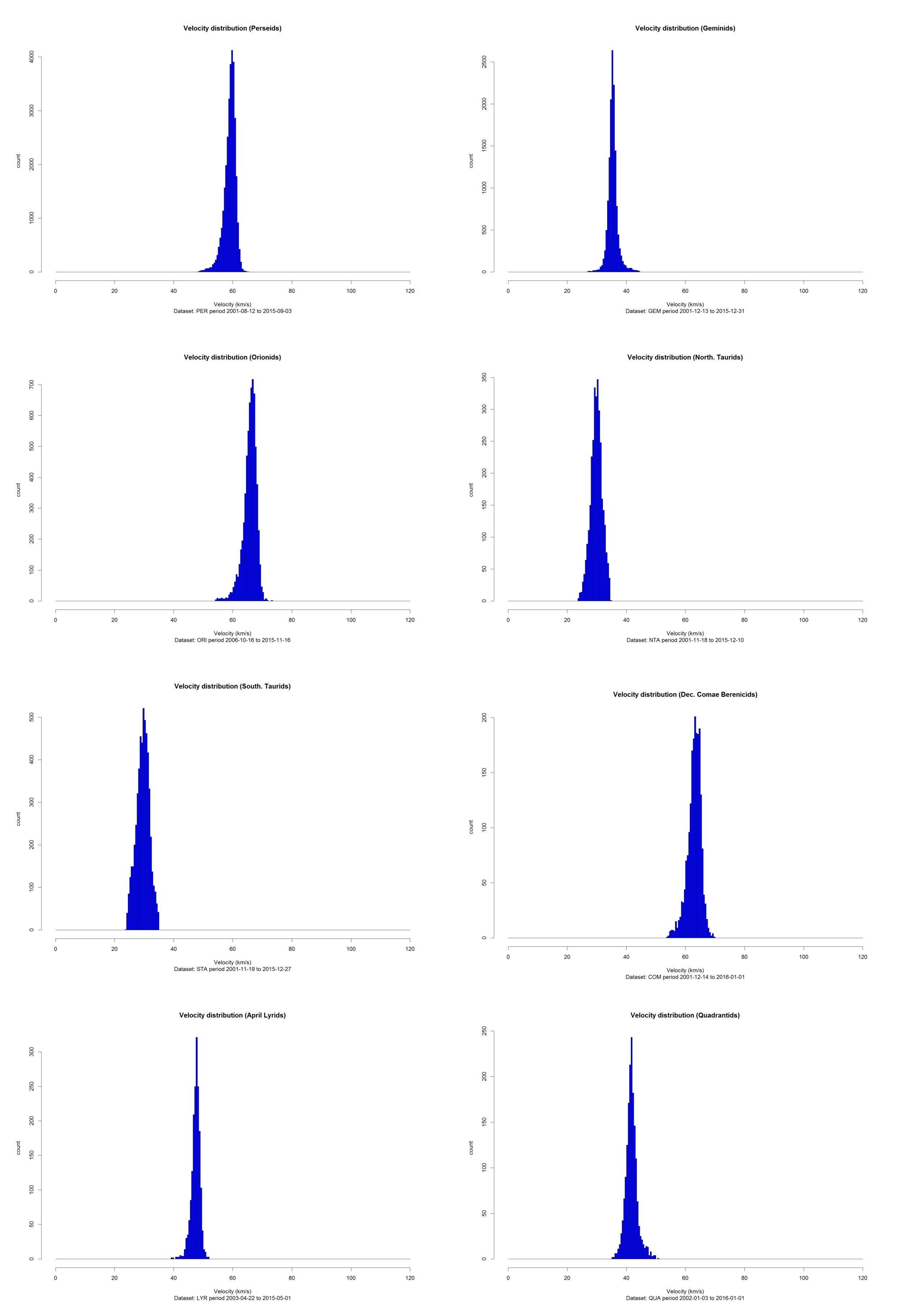 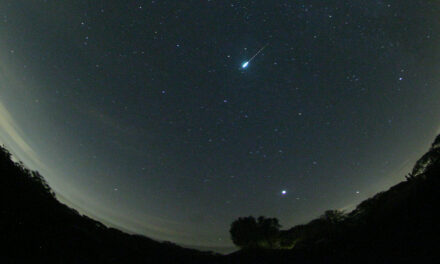 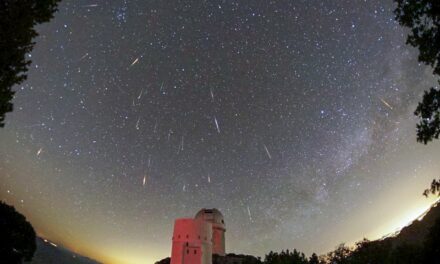